Most longtime Disney guests know a lot of the unspoken “rules” of the resort; the parks always open 10 to 15 minutes earlier than posted, never believe bus driver “rumors”, turkey legs seem like a better idea than they actually turn out to be, you can always grab a quick nap on Ellen’s Energy Adventure, the Yeti will forever be in “disco mode”, the first row of Splash Mountain is the wettest and finally, you can always get a reservation at Nine Dragons. 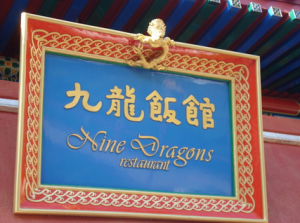 Epcot’s World Showcase is overflowing with great places to eat, and most of the sit-down locations book-up months in advance, but Nine Dragons always seems to be open. I had never eaten at Nine Dragons before, as I had always been advised against it. And with such glowing reviews of multiple other alternate locations, I didn’t imagine ever voluntarily trying it. But a few months ago, my wife and I were staying at Coronado Springs for a few nights before switching to another hotel. We were offered a free Dining Plan, so we decided to take advantage of it. Now I’m usually  for booking our dining reservations 180 days in advance, but for the first couple days of our trip, we decided to try doing a day-of walk-up based on whatever we felt like eating at the moment. Cut to 7pm on a Sunday night in Epcot. We soon find our first, second and third choices for dining are all booked up. Knowing we’ll lose our free meal credit if we can’t find a place, I frantically turned to the Disney app to find any place in the park that is open. And just as sure as the sun rises in the east, Nine Dragons was the only place with available seating. 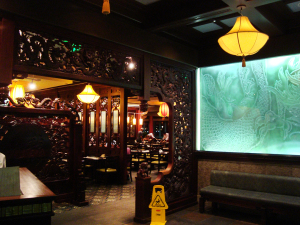 Located in the China pavilion, Nine Dragons serves Americanized Chinese fair; noodles, dumplings, egg rolls, duck, pork and fried rice. As we walked over to the restaurant, my wife tried to make lemonade out of our lemon situation by saying, “Maybe it won’t be that bad…”

The restaurant is huge on the inside and very well themed. All the traditional ornamentation found in the China pavilion is carried through inside. Visually, it was great. We were seated right away, and our server was very attentive and quick.

The menu is pretty large and had a decent selection is different items. I decided on the Spit Roasted Bejing Chicken with Chinese Barbecue Pork to try and sample two different meats, while my wife had the Honey-Sesame Chicken. As karma is often ironically cruel, I found my food decent, while my wife, who sealed her own fate saying “it might not be that bad”, did not enjoy her meal. 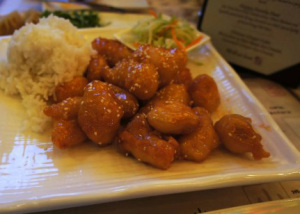 My chicken was a bit too salty and the glaze was a bit too overpowering. My wife was also not a fan of her chicken for similar reasons. But the bbq pork I had was pretty good, and the fried rice was fairly standard, but not bad. For dessert, we split the Banana Cheesecake Egg Roll, a fried pastry roll filled with ice cream and drizzled with caramel sauce. We both agreed it was probably the best part of the meal.

I will say that I enjoyed the look and feel of the restaurant and I found the staff very friendly and attentive. But at the end of the day, most people have great local Chinese food places in their neighborhoods. Nine Dragons at its best is comparable to that, but usually below average.  And once Disney’s high food costs are factored it, I can’t imagine recommending it. Honestly, I can think of 10 other countries I would recommend before dining at the China Pavilion. So make sure you book your dining reservation well in advance, or you may find yourself suffering my same fate.