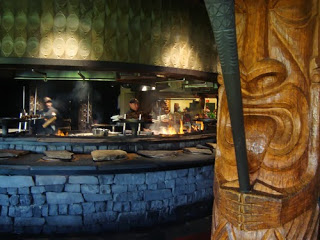 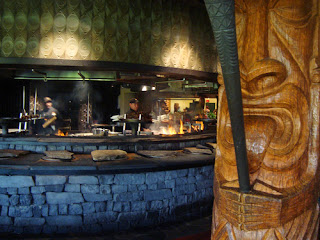 On our last trip to Walt Disney World, we decided to try Ohana at the Polynesian Resort for the first time, based on years and years of recommendations. My only regret is that we didn’t try it sooner, as it was one of the best meals we’ve ever experienced at Walt Disney World.

Ohana is located on the second floor of the beautiful Polynesian Resort. Advanced Dining Reservations (ADR’s) are highly recommended. We arrived for the first seating at 5:00 and a large crowd was already gathered outside the restaurant. The meal is served family style, which means large plates of each course come out for the whole table, and you may request more of anything you’d like. Tables surround a large open-air grill where the many types of meat are cooked, and most tables have an excellent view of the beautiful resort pool area and beachfront from the many windows.  While dinner is being served, a woman with a ukulele serenades guests and encourages the kids to play games like coconut races and hula-hoop contests.
Beverage orders are taken and they include Coke products and some mixed tropical drinks (alcohol is not included in the fixed price). First out was a jumbo Salad Bowl with Mango-Poppy Seed Dressing and large loaf of Pineapple-Coconut Bread. Both of these items were delicious and reminded me of a Hawaiian Luau, but I would try not to fill up on bread as much, much, much more was coming. 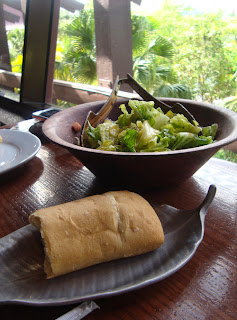 Next came a plate of Pot-stickers, a plate of Coriander Chicken Wings, Lo Mien Noodles and Grilled Veggies. The pot-stickers were crispy and perfect with the dipping sauces. The wings were also excellent, which is probably why they are often featured in Disney World cookbooks. And my wife, who enjoys her Chinese food dishes, claims they were the best Lo Mien noodles she’s ever had.  For just two people, they served us 8 pot-stickers  8 wings, and large bowls of noodles and veggies. This right there made us both pretty full, but the main course hadn’t even started yet.  And I couldn’t let this delicious food go to waste, and I packed it in like a bear hibernating for the winter. 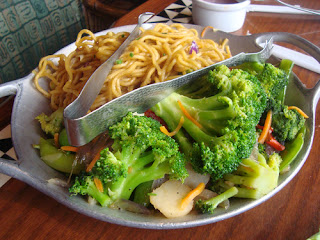 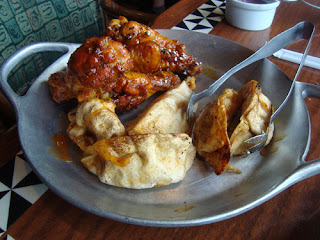 Next came the meat selections: Oak Grilled Chicken,  Asian Barbecued Pork Loin,  Marinated Sirloin Steak, and  Spicy Grilled Peel ‘n Eat Shrimp. The meats came to our table on large skewers, similar to your local Brazilian steakhouse, and you could tell your server how much to add to your plate. Also included were dipping sauces for the meat: Peanut Sauce,  Chimichurri Sauce  andPineapple Sweet and Sour Sauce. My favorite meats were the pork and shrimp, but honestly they were all good. I particularly enjoyed them with the Chimichurri sauce.

It was. So. Much. Food. I’ve never seen so much food arrive at a table for two people. I even mentioned it to our waiter, who replied, “that’s what everyone says”, which made my wonder why they don’t decrease the portion size and save the wasted leftovers?  But then again, I’m sure that why many people specifically come here. We sampled all the meats, but were way too stuffed to request seconds.

But not so fast, because there was still dessert coming; ‘Ohana Bread Pudding served a la mode with Bananas and Caramel Sauce. My wife is a big fan of bread pudding and confirmed it was once again some of the best she’s ever had. 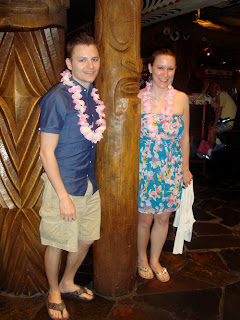 Ohana will run you $36.20-$42.59 for an adult and $18.10-$20.23 for a child (ages 3-9). The price fluctuation is determined by the season you travel there, and even the day of the week. But honestly, compared to a local Brazilian steakhouse and relative to Disney dining in general, I thought the price was well worth it. There is a crazy amount of food and it is all some of the best I’ve experienced at the World. The servers were friendly and attentive. The restaurant had just opened to a large crowd, and they attacked the tables like a well-trained team of Navy Seals.  The atmosphere is terrific as well. If you can’t stay at the Polynesian, this will give you a great taste of the tropical oasis. As per usual with Disney, the Luau theming really transports you to a different place, and the friendly atmosphere and open-air kitchen make you feel like you’re at a Hawaiian family BBQ. I highly recommend dining at Ohana on your next trip, and make sure to take some time to tour the opulent resort.
Share this...