On Board Activities for Toddlers and Babies on a Disney Cruise 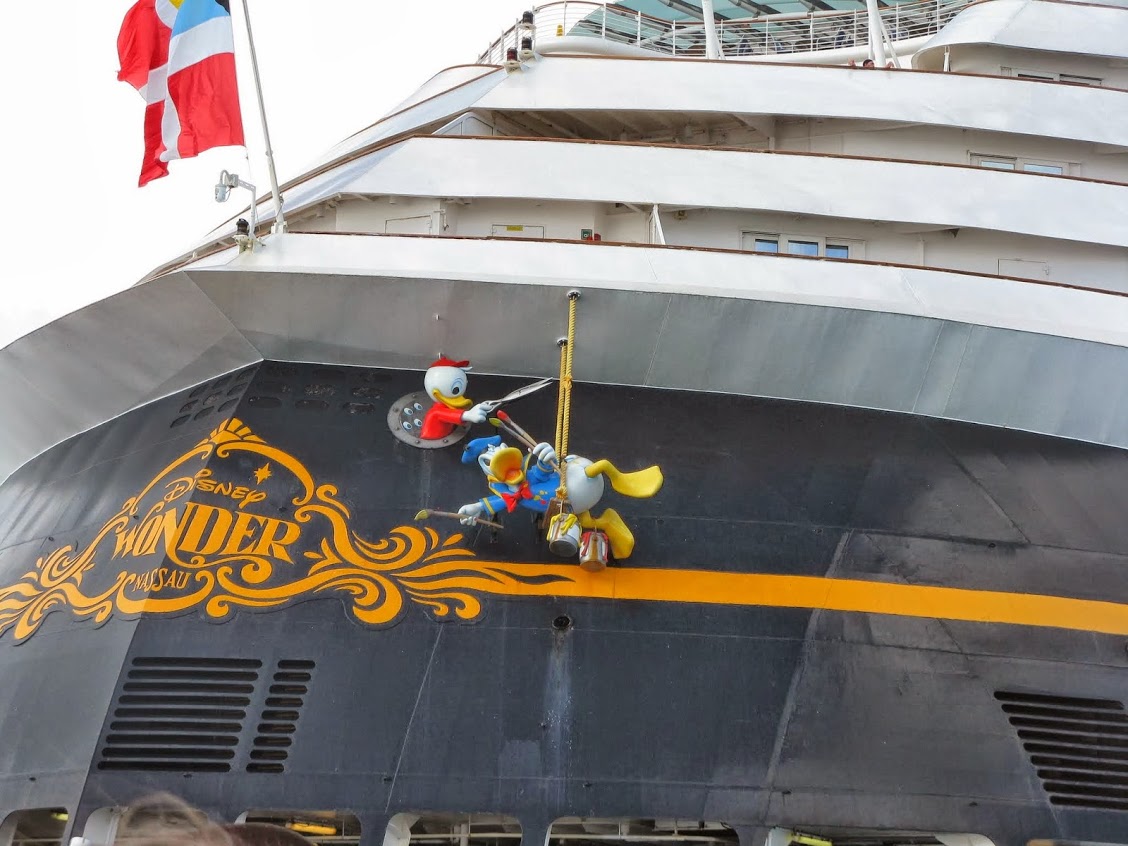 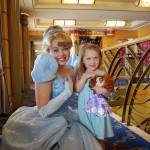 Taking a cruise can be an amazing experience, and one that I personally think everyone should do at some point in their lives. And going a Disney cruise, you know that the experience is going to be magical. But what do you do if you have infants and toddlers on board with you? Is it better to wait, and more importantly, is there going to be stuff for the little ones in your group to do?

A few months ago, one of Character Diva’s friends went on a Disney cruise with her mother, husband, and their two kids, both of whom were under the age of four. They had a wonderful experience, and were kind enough to share their thoughts about their vacation with all of you. So if you’re planning a Disney cruise and plan on taking little ones with you, here are some great tips for you for activities you can do on board!

To begin with, my friend and her family chose to sail on the Disney Wonder over Christmas. While not the traditional place to spend Christmas, it did come with all kinds of wonderful and magical experiences that you can read in my article about Cruising over Christmas. They also sailed Dec. 21st-27th, and left from Galveston, TX. To have a basic idea of their itinerary, Day 1 was spent at sea, Day 2 was spent in Cozumel, Mexico; Day 3 was spent on the Grand Cayman Island, and Days 4 (Christmas) and 5 were spent at sea. As far as activities went, they opted for various forms of entertainment both on board. Of course, traveling over Christmas, you knew there would be a Santa Meet and Greet as well as other holiday festivities, but for those of you who are not traveling over the Christmas holidays, they also participated in several forms of entertainment they do on board year round such as the Princess Tea Party. They also watched two live shows: The Golden Mickeys, Toy Story, and Disney Dreams. 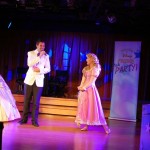 They got tickets for the Princess Tea Party as soon as they boarded at Guest Services. Disney Diva Tip: According to Character Diva’s Friend (CDF), it’s not announced, but they have them on every sailing. She found out about it by reading on someone’s blog. While at the Princess Tea Party, Rapunzel and Tiana made acted as hostesses and they had chocolate chip cookies and apple juice to munch on.  Another highlight of the Princess Tea Party was they learned how to curtsy and waltz, too.  And of course there were photo opportunities at the end…. CDF’s daughter, (then 3 ½ years old at the time) absolutely loved it! Not only will your child feel like a princess, but really, what better way is there to spend with your child, and have plenty of time to interact with two of Disney’s most beloved princesses?

Disney Diva Tip: Not all of the activities CDF’s friend wanted to sign up for were available, and some require tickets and/or have limited spacing. Some she didn’t even realize were available until she was onboard, and by then it was too late. Some tricks to avoid this problem is 1.) Consult blogs such as ours, 2.) Book a vacation through someone such as Patricia Payne (whom Tips from the Disney Divas & Devos highly recommends). Travel agents like Patricia Payne are bound to know more of the “insider details” and may be able to make recommendations for your family that you wouldn’t have even considered otherwise. 3.) You can always find a friendly cast member onboard (though again, remember it’s often a first come, first served basis, and events that are very popular may already be filled, or you can always call ahead or talk to a cast member online. Whatever you choose, we’re all here to help make your vacation plans go a little smoother! As far as the live show entertainment, CDF’s kids (ages 1 and 3 ½ ) sat through Toy Story really well and that one was their personal favorite. So if you have small children, that one will probably be the best. (The Golden Mickeys is based on awards show like the Oscars or Academy Awards, so may have a harder time holding small children’s attention… though there are lots of characters and songs in it.) CDF’s family had to skip dinner in the main dining areas on the nights they chose to see the musicals, due to their kids’ sleeping schedules.  CDF’s  main complaint about the cruise was there were not many food choices unless you ate on their schedule – CDF’s kids were up sooo early that they couldn’t wait for the nicer breakfasts most mornings. They also had other commitments, such as Mass on Sunday and Christmas, where they needed to eat beforehand, so CDF thought eating at Goofy’s Galley was their only option. 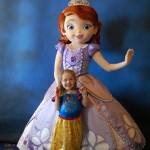 Other on board activities their family participated in included the Disney Junior Dance Party and a Dance Party they happened to come across after dinner on formal night (Christmas Eve).   They taught the kids little dances at the Disney Junior one.  CDF  thought it was pretty fun and well organized. 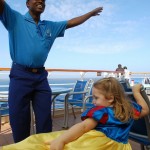 Disney Diva Tip for those of you wanting to eat at Palo’s (or any of the other more formal, reservation required restaurants): Take into consideration your itinerary when deciding what night to attend. CDF and her husband had to cancel their reservations because they had booked it for the last evening of the cruise without realizing it would be really busy packing and setting our luggage out in the hall for the staff to take before bedtime.  They were too exhausted and had a TON of stuff to organize and pack that night so decided to save their money instead. Disney Diva Tip: For those of you opting to save money, the three dining rooms you will eat at (which are included in your package) all serve wonderful meals, and they are very good at catering to your requests. Just don’t be indecisive as I learned in my article here. Don’t ask if the soup or salad is better, or if they’d recommend the chicken or the beef. Why? Because they’ll just bring you all of it. 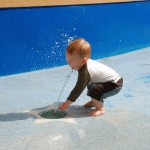 CDF’s son (who was 1 year old) played in the splash pad. CDF said that it was tiny and pathetic compared to the ones back where we live and in some other large cities, but he still had fun.  CDF’s daughter played in Mickey’s pool and it was perfect, although she wished her son would have been able to swim too.  CDF’s daughter went down the slide by herself and it was deep enough she could “swim” underwater, but shallow enough to be in there by herself without CDF worrying. 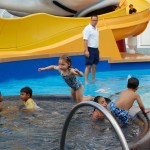 Something that you might not have thought of when planning for your trip… CDF’s daughter was obsessed with the ship’s anchor.  They went to the mechanical room quite a bit.  The mechanical room is where the running track is.  They were able to look at the anchor and could see some men working usually.  They also talked about the life boats a lot and the sea-doo type boats they had hanging up in that mechanical area for emergencies.  CDF thought her daughter was disappointed that they never used the life boats, particularly after watching the safety video that plays automatically when you check into the room the first day about a dozen times – maybe more. 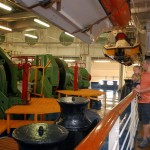 The cruise ship also has lots of movies showing in their theaters, including ones that are still playing in normal theaters. On my Disney cruise, a cast member announced, “We are the only cruise ship showing movies that are currently playing in theaters. How can we do this? Easy! We own them all!” (Yes all of the movies are obviously Disney, Pixar, or some other offshoot owned by Disney). CDF and her daughter watched Frozen in the Walt Disney Theater while her son and husband napped.  It was her daughter’s first full length movie to see in a theater, and she absolutely loved it. 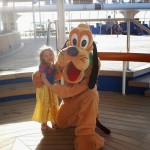 And no Disney vacation would be complete without Disney character meet and greets! There are lots scheduled on various places throughout the day You can also bring a pillowcase (or something else to sign), along with pens, stick them in a ziploc bag with your room number labeled on it, and leave it on a bed fro the characters to sign. A cast member will kindly take it to the characters to have them autograph it for you, and then return it to your room. Disney Diva Tip: Having characters sign a pillowcase is not only a great (and inexpensive) souvenir, but it is also a great way to commemorate your trip and skip the long lines. 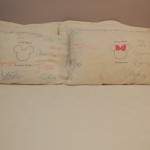 So as you can see, there are lots of things that you can do with toddlers and babies on the Disney Cruise ship. Have any of you taken little ones on a Disney cruise before? What was your experience?