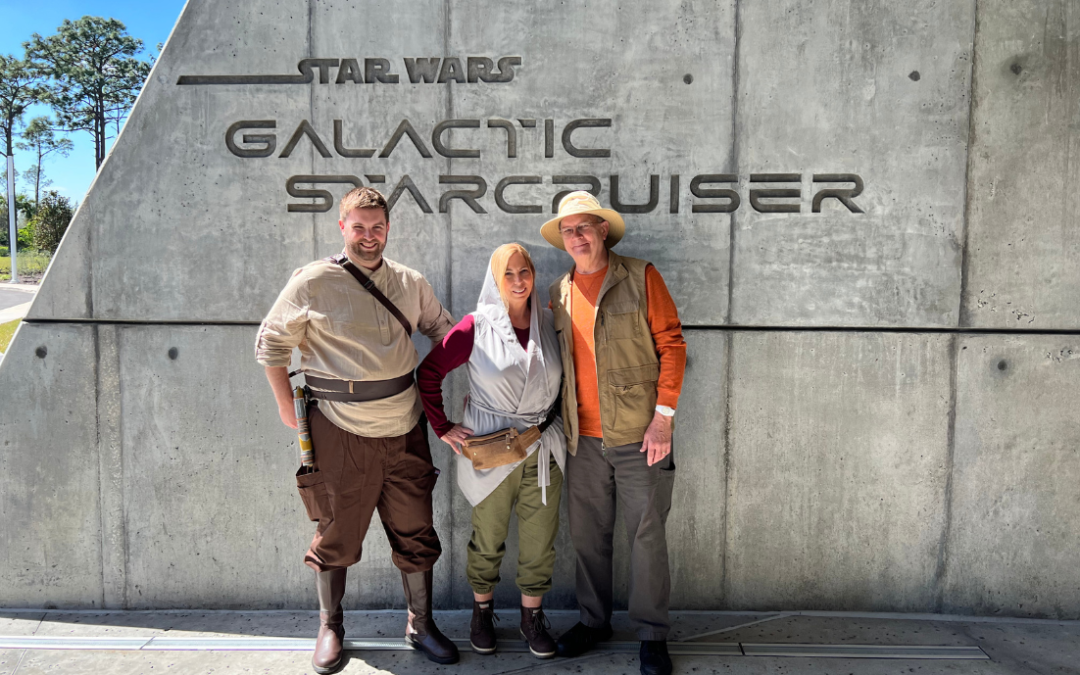 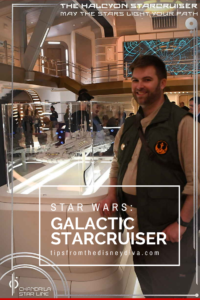 If you’re a Star Wars fan (and maybe even if you’re not), you’ve probably heard Star Wars: Galactic Starcruiser (aka the Star Wars hotel) opened recently at Walt Disney World Resort. We were on the inaugural voyage, and it was an experience like non other.

Since Disney announced Star Wars: Galactic Starcruiser,  there has been an abundance of divergent opinions. Fans were undeniably excited at the thought of actually living their own Star Wars story onboard the Halcyon (the name of the Starcruiser). When the price was finally announced, however, excitement turned to criticism. It is, inarguably, an expensive adventure. Prices vary depending on your cabin and dates but expect to pay in the $6,000 range per cabin for 3-4 people.

Disney markets Star Wars: Galactic Starcruiser as a 2-night immersive experience. We found this to be completely accurate. It is absolutely immersive. The characters onboard will engage with you on a personal level you don’t see in the parks. The choices you make along the way will determine your adventure. You also have the choice to be more of a spectator, and just watch from afar. It is, after all, YOUR story and you decide your level of engagement.y

To make this adventure come to life, Disney Imagineers have summoned all the powers of the Force to create some truly extraordinary magic. But is it the right vacation choice for your family? Only you can decide. To help with your decision, here’s a mostly spoiler-free summary of the first day of our voyage.  Watch for future articles about the second day, food, missions, costumes, etc.

When we booked our trip, we knew we wanted to spend some time at Walt Disney World Resort both before and after our voyage.  We checked into Disney’s Pop Century Resort prior to our voyage and enjoyed 3 days at the parks.  The afternoon before we checked out, we asked the front desk about transportation to the Starcruiser.  We had expected to hear something from the Starcruiser about transportation but hadn’t received any information.  Typically, Disney will transport luggage for you from resort to resort, but Star Wars: Galactic Starcruiser is a different type of resort, so we weren’t sure if this service would still be provided.

The cast members at Pop Century told us we could bring our luggage to Bell Services, where they would order a taxi to take us and our luggage to the Starcruiser.  They also advised us Disney would cover the cost of the taxi. Since Starcruiser check-in was 1:00, Pop Century said they would provide late check-out until noon for us.  And finally, they said we should be getting a voicemail message detailing all this information later that evening.

Diva Tip:  Be sure to have any pre- or post-Disney resort stay linked to your Starcruiser reservation.  By having our reservations linked, Disney knew we needed ground transportation, and it was handled without any stress or expense.

As advised, about noon we headed to Bell Services, and were in our taxi within a matter of minutes.  I was a little worried we would be turned away at the security gate for Starcruiser, since everything I had read indicated we couldn’t arrive until 1:00 p.m., and it was only around 12:15 p.m.  When we arrived at the gate, the guard checked for our name on a list, then waved us through.  We were greeted by several Starcruiser cast members who welcomed us, paid for the taxi, took our luggage, gave us bottles of water, offered to take our pictures in front of the terminal sign, and gave us our datapads as well as a very quick introduction on how to use them. Talk about the VIP treatment! 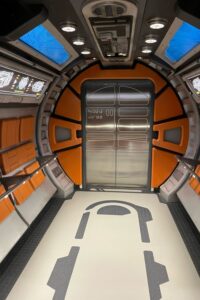 Transport vessel from the terminal to the Halcyon

If you have your own vehicle, you can drive directly to the Starcruiser terminal, and your car will be valet parked in a nearby parking lot.  It seemed like this was by far the more popular choice, as we saw very few taxis on our arrival.

Diva Tip:  Arrive early!  I heard of other guests who arrived closer to or even after 1:00 p.m., and of course it was much more chaotic!  By being early, we had more individual attention and were at the front of the line when passengers were finally allowed to board the Halcyon.

The boarding process took place in small groups. We went through security scanners, watched a brief welcome video, then entered the transport vessel which took us up to the Halcyon.

The transport docks next to the Atrium of the Halcyon.  When you enter, you’re greeted by a crew member, who escorts you to your cabin and makes sure you know how to work the control panel, portal window, and other features of the cabin.  They are more than accommodating, and very happy to answer any question you may have. 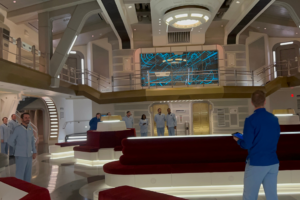 The Atrium of the Halcyon

As with most cruises, arrival afternoon is pretty open for exploring the ship and enjoying lunch onboard.  It’s also a good time to get familiar with using your datapad.  All activities onboard will require the use of the Play Disney Parks app on your datapad, so you’ll want to be comfortable using it. 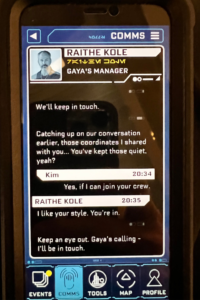 You will use your datapad for communications, your itinerary and as a tool for completing missions

If you’ve ever been on a cruise, you know that the first major activity before setting sail is the ship’s muster.  This is a safety procedure where everyone gathers in a designated place in case of an emergency.  In keeping with the story of our cruise, we were directed to attend muster.  You may be able to guess that during this activity, some “unusual” things begin happening.  I don’t want to spoil the adventure for you but suffice it to say you will want to follow along with the directions on your datapad and attend required events.

After muster there was a Captain’s Reception where we had the chance to mingle with other passengers.  It was fun talking with them – some had elaborate backstories and others were “just along for the ride.” We also had a chance to meet some characters on the voyage.  Sandro was especially intriguing. 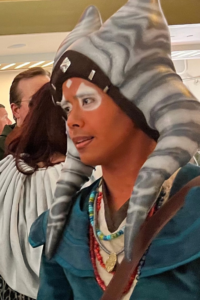 He introduced himself as a Togruta musician, and we had a wonderful conversation about music.  He was very deliberate in asking for our names and using them later in the conversation.  It was remarkable to feel so connected to a character and be so intwined with the story, even as it was just beginning.

After the reception we were able to change for dinner and enjoy a delightful meal with live musical entertainment provided by Gaya, a galactic superstar.  While the food had an exotic and unique appearance, the taste was fairly “Earthly.”

We were in the first seating for dinner, so while the second seating was taking place, we were able to be involved in some missions.  Participating in missions consumes a great deal of your time, but they provide you with tremendous opportunities to meet characters as well as other passengers. It’s your chance to really live your Star Wars story. 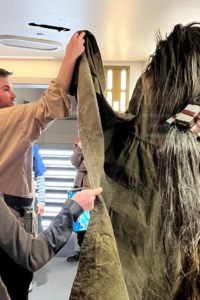 Our mission: help Chewbacca get to the Bridge without being noticed

We got involved with helping Chewbacca make it to the bridge without being detected by the First Order.  We were completely engrossed in the story, brainstorming ideas and working with other passengers as well as the crew to hide a Wookie as we walked through the ship to the bridge.  A group of people trying to hide Chewie with a tarp as we strolled through the ship is a moment we won’t soon forget.

While all this was happening, “routine” ship activities were also taking place.  You could choose to attend a meet and greet with other passengers, learn how to play Sabacc, or even participate in dance lessons! The Outer Rim Regalia was especially fun.  Many passengers went all out with their role-playing, and the Regalia was a chance for them to “walk the red carpet” and show off their galactic best.

One of the most exciting activities scheduled on our itinerary was Bridge Operations Training. Groups of 20-25 passengers reported at a designated time to the Bridge for the chance to learn how to operate the various stations.  We learned how to retrieve cargo, operate shields, maintain systems, and fire weapons.  If was like Millennium Falcon: Smugglers Run on a completely different level.  An entire group of people pushing buttons like crazy at separate stations while working together to accomplish a goal.

The final scheduled activity for the evening was the Cruise Director’s toast where everyone gathered in the Atrium as a “bon-voyage” type of moment.

It was an exciting first day.  Frankly, we were exhausted and ready to return to the cabin. After all, Day 2 was our shore excursion to Batuu, and we had received several communications on our datapad regarding missions we needed to complete on Batuu.

Watch for a future article about our day on Batuu!  Until then, safe journeys!

Are you ready to book your adventure on the Starcruiser?  Patricia at All for Dreams Travel can make your voyage a reality!  Contact her for a free quote!