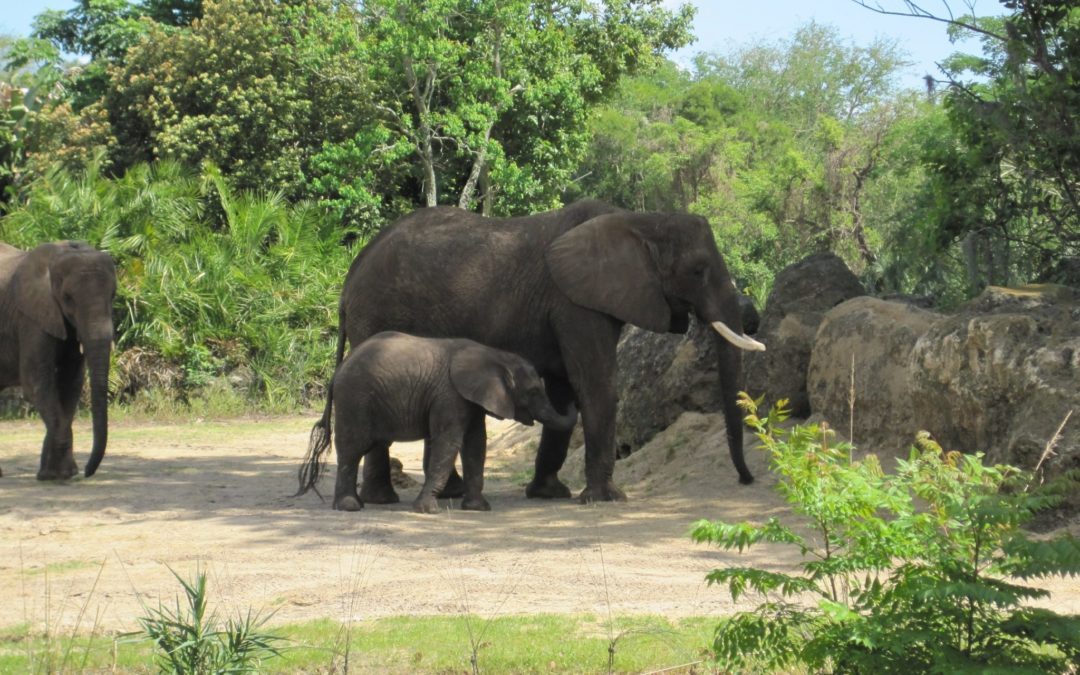 April 22, 2018 marks the 20th Anniversary of Disney’s Animal Kingdom. Disney has been working hard planning special events and activities for this park during the month of April through May 5th.  The official anniversary date is April 22, 2018 which, by no coincidence, is Earth Day. 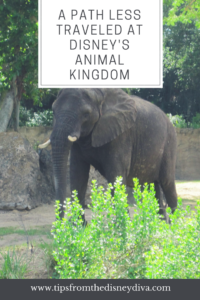 If you find yourself in the Park during this time you’ll be celebrating a “Party for the Planet”. Disney has planned special events and are releasing special merchandise with the 20th Anniversary logo, and if you are there during the above mentioned dates, Disney will be releasing “I Was There” special merchandise.

Diva Tip: If you are an annual pass holder, there will be two shirt designs, (t-shirt and tank top) created especially for you to purchase!

One special event that has been happening since the beginning of the month is the new 20th Anniversary behind-the-scenes tour called A Path Less Traveled. This tour is scheduled to run from April 1 through May 5th, 2018. That being said, there has been quite a lot of positive feedback and guest interest for the tour. I received a guest survey yesterday about my experience. Many of the questions were phrased about the future. For example, asking if the tour was still offered would I attend a second time? How could the tour be improved? What I specifically liked and disliked, and would I recommend this tour to others travelling to Walt Disney World? This seems like a lot of information gathering for a tour that ends in two and a half weeks. For now, the tour is scheduled to end on May 5th and there are still spots available. If you can’t make it down to Animal Kingdom before then, keep an eye out for any future Disney updates on A Path Less Traveled.

When I called a month ago to book the tour, the Cast Member had very little information. All they could tell me was that there would be behind-the-scenes stops at the veterinary clinic and possibly other buildings, the Caring for Giants elephant tour and VIP seating for one of the Rivers of Light shows in the evening. He said I would have different times to check into these tours throughout the day, but could not give me any more specific information. I have enjoyed all the tours I’ve taken throughout the Disney Parks, so I signed up not really sure what to expect. My only problem was…how was I supposed to schedule FastPass+ around a schedule I didn’t know? More about that later… 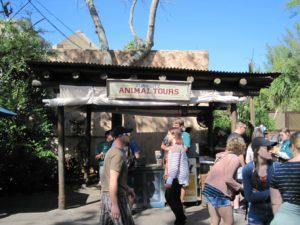 For a Disney tour, this one is much more affordable than some others at $59.00 per person plus tax. The tour is completely accessible, in fact, I had four guests in scooters and one using a walker on my tour. There are three tours scheduled everyday and each is limited to fifteen guests per tour. Our group had twelve guests which is a nice number. As with all Disney tours you will be required to sign a release excusing Disney from liability.

Included with the tour are a drink and snack after Caring for Giants. We ordered our snacks in the morning as we checked in for the first part of the tour. The choices were various soft drinks or water and a choice of snack including a pretzel, apple, orange, banana or a bag of chips. The pretzel was a very popular choice that day. 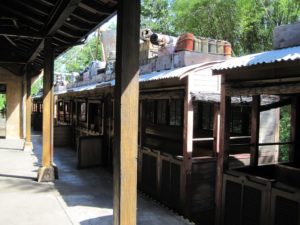 A Path Less Traveled is divided into three separate sections as follows:

The tour groups were assigned based on the order that people were checking in. The check-in desk is located across the walkway from the standby entrance to Kilimanjaro Safaris. Once everyone had checked in we headed over to the Wildlife Express Train to Rafiki’s Planet Watch. We had a bit of a wait here. We needed to wait for the third train to be able to board. Our guide was great with sharing Park information and quizzing us on our Animal Kingdom knowledge to pass the time. Once we arrived, we headed to the animal nutrition building. Here we were led into the working kitchens and watched as nutritionists cut up and weighed all the food down to the ounce and stored it in storage containers. They followed the nutritional plan laid out for each animal (or groups of animals) in a binder. The kitchen separates the meat and vegetable stations from each other. What amazed me in this kitchen was not only how sterile everything looked, but how fresh the fruits and vegetables were. We were told that all the food fed to the animals was human grade and was provided by the same company that delivers food to all the Disney World restaurants across the property. I’ve been in restaurant kitchens that are not nearly as clean and organized as this kitchen was. It was vey impressive.

We were then led outside to a station that had been set up to talk about the nutrition for the gorillas. We were able to touch and smell a gorilla “cookie” full of nutrients. There are four zoo nutritionists who work at Disney with their Masters Degree who developed and patented these “cookies”. They developed them for a gorilla sanctuary in Africa. This sanctuary was struggling to keep the proper nutrients balanced based on what they had access to. The Disney nutritionists traveled to the sanctuary and then developed this biscuit and sent the recipe back to Africa so the nutritionists down there could make them themselves. 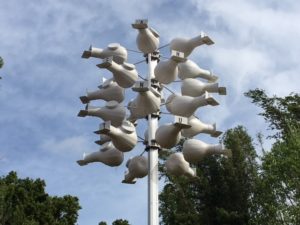 Next were the purple martin houses. We learned all about this species of bird and how Disney World attracts them.  The houses are on a pulley system so that twice a week the conservation team can lower them to record which houses are being used, who has found a mate, the number of eggs in each house and the number of baby purple martins born. One of the houses had been taken down and we were able to look inside and see five baby purple martins. The adult birds are very trusting and don’t bother the team, or the guests, when the houses are taken down for recording purposes. Did you know that the shape of the birdhouses are fashioned after the gourd? Native Americans used to hang gourds to attract these birds to assist with insect control for their crops.

The last stop was the veterinary clinic. As we walked through the building to the clinic we were able to see the way Disney World honours Walt Disney. There are many pictures and inspirational quotes of Walt’s on the walls. There are even staff awards for following in Walt Disney’s footprints for their own philanthropy and conservation efforts. Walt Disney was very ahead of his time when he was already worried about the state our planet would be in if we didn’t begin to preserve our resources.

We were taken into a room with a huge MRI machine. We were able to look at some of the equipment and even x-rays that were on display. The guides spoke about the companion animals that Animal Kingdom has that travel around to visit children’s hospitals and other events. We were introduced to a giant rabbit (whose name has escaped me) and learned all about the veterinary care he received for a re-occuring ear infection. 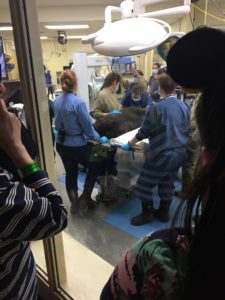 As we were leaving the clinic we passed an active surgery room. One of the gorillas was having a colonoscopy. We were able to walk around and watch the procedure through the viewing window.

Our tour ended as we left the veterinary clinic. We were all reminded to check back in at either 3:00pm or 3:45pm for the next tour. The only downside to this tour was that it was all backstage so pictures were not allowed. There were so many times I wanted to take my camera out. 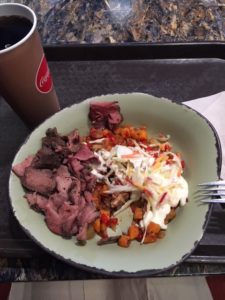 I had a couple of hours free time to grab lunch. I was excited to head over to Satu’li Canteen in Pandora – The World of Avatar to try their combination bowls. I ordered the beef bowl with red and sweet potato hash topped with creamy herb dressing. This meal was delicious!

While this tour was included in A Path Less Traveled, Caring for Giants is it’s own tour offered multiple times a day year round. The cost for just this tour is $30.00 per person plus tax.

I was very glad this tour was included. I knew about Caring for Giants, but I didn’t think I was all that interested in just elephants. This tour changed my mind. 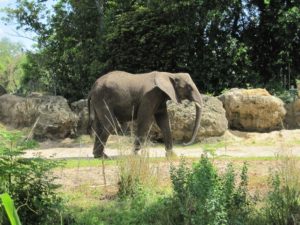 Once we all met back up at 2:45pm and checked in, we were led backstage to a waiting bus. This short ten minute bus ride brought us behind the elephant habitat that you can see from the Kilimanjaro Safari ride. We were met by two guides who presented information about the elephants at Animal Kingdom. We lucked out, and most of the elephants had come around to the back where we were. They must have known it was a photo opportunity! We were then introduced to Amanda from Africa. She talked about the Elephants and Bees Project that the Disney Conservation fund is working on with farmers in multiple African countries. Elephants are afraid of the African honey bees. The elephants can be quite destructive to farmers crops, so the Project assists farmers in setting up a wire fence with hanging beehives to deter the elephants naturally rather than risking the farmers having to shoot the elephants to keep them from eating their crop. The farmer in turn, can sell the honey collected from the hives. It’s a win-win-win for the bees, elephants and the farmers. 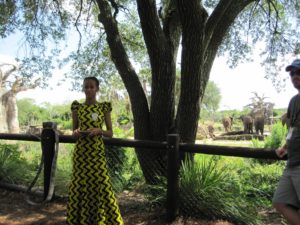 3) VIP seating at Rivers of Light

This nighttime show is presented on the Discovery River. The VIP section for the tour is located in the Asia section. Rivers of light uses illuminated boats, music, fire, lasers , live performers and images projected on water screens to tell the story of all living things through animal folklore. The VIP seating area has some great views of the show. 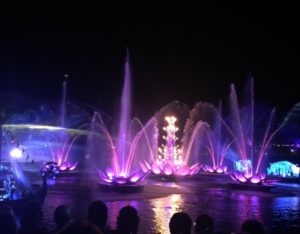 Now the important part for all you planners out there – the times!

The tour begins at 11:00am with a check-in time between 10:30 – 10:45am.  The first tour is scheduled for an hour to an hour and fifteen minutes. On our tour we had to wait for three trains before getting on one, so our total tour time was closer to an hour and forty five minutes. So allow time for the tour to run a bit long if you are booking FastPasses so that you can enjoy the tour without worrying about the time.

Caring for Giants has an option for the 3:00pm or the 3:45pm tour. This tour is scheduled for an hour, but again, ours went a bit over until about an hour and a half.

The Rivers of Light showtime was for the 8:45pm performance. My tour guide said that is the usual showtime for this tour.