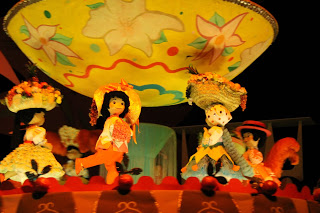 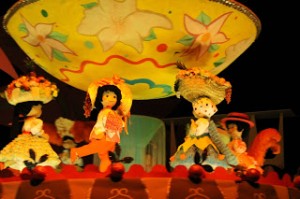 Mary Blair helped to design the It’s a Small World attraction at Disneyland.

Born Mary Robinson, Mary Blair was an American artist. She began her work in animation with Ub Iwerks studio where she worked with her husband, Lee Blair. In 1940, Blair joined the Walt Disney World company. She worked briefly on art for Dumbo, an early version of Lady and the Tramp and a second version of Fantasia which was not released until the late 1990s.  After a short hiatus in 1941, Mary traveled with Walt and Lillian Disney to various South American countries on a research tour as part of President Roosevelt’s Good Neighbor policy. During these trips, Mary and Lee worked on art for the animated feature films, Saludos Amigos and The Three Caballeros. Mary was credited as art supervisor on those films.

Disney studio was busy during the early 1950s, with an animated feature being released nearly every year.  Blair’s artistic influence of her concept art is strongly felt in Cinderella (1950), Alice in Wonderland (1951), and Peter Pan (1953).

After the completion of Peter Pan, Blair resigned from Disney.  She worked as a freelance graphic designer and illustrator.  Blair created advertising campaigns for Nabisco, Maxwell House and others.  Blair’s illustrations can also be found in several Little Golden Books which remain in print today.  Blair also designed Easter and Christmas sets for Radio City Music Hall.

Walt Disney, who thought highly of her wonderful sense of color styling, requested Blair to begin work on Disney’s newest attraction, It’s a Small World, which was originally a Pepsi sponsored pavilion benefiting UNICEF at the 1964 New York World’s Fair.

In 1967, Blair created mural art for the Tomorrowland Promenade.  Two similar murals flanked the entrance corridor, with one being covered over in 1987 with the opening of Star Tours and the other being replaced in 1998 by Rocket Rods. Blair’s design of a 90 foot high mural remains a focal point at the Contemporary Resort at Walt Disney World, which was completed for the opening in 1971.  One year later, Blair was credited as color designed on the film version of How To Succeed In Business Without Really Trying.

Mary Blair passed away of a cerebral hemorrhage on July 26, 1968.

Although her work, outside of her association with Disney, is not widely known, Blair’s bold and ground-breaking color design still inspires many of today’s contemporary designers and animators.  On Friday, October 21, 2011, a Google doodle was created to commemorate the centennial of her birth.  The doodle was an image of an illustrator as Mary might have drawn herself, surrounded by the simple patterns and shapes that made up her familiar cartoon world.

Blair was recognized with a posthumous Disney Legend award in 1991.  In 1996, Blair received, also posthumously, the Winsor McCay award from ASIFA-Hollywood.