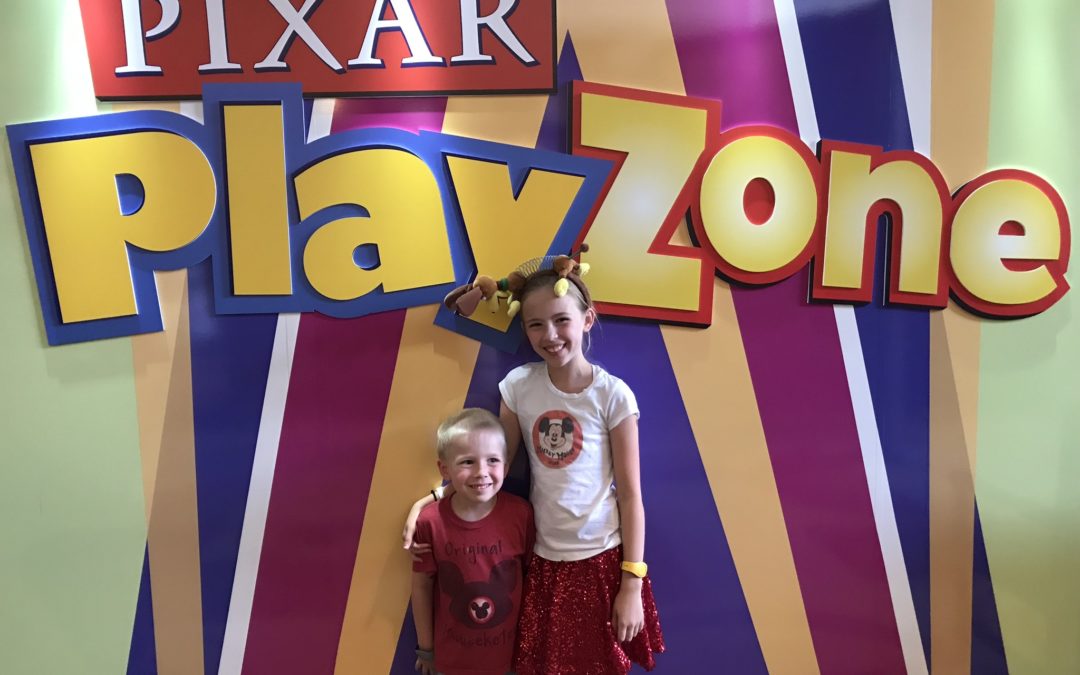 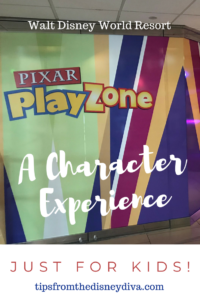 We all know Walt Disney World Resort is a fabulous place for families to make memories together.  Seemingly unlimited attractions, characters, entertainment, and dining options offer opportunities which can be enjoyed by both the young and young-at-heart.  But there are some activities which may not be quite as magical for children.  A romantic dinner at a signature dining restaurant, an evening enjoying Epcot’s International Food and Wine Festival, an indulgent couples massage – all options which may be high on your “wish list,” but difficult to accomplish when you have children with you.

There are several options for parents who are looking for a way to have a child-free time while at Walt Disney World Resort.  Disney has long offered in-room childcare and Children’s Activity Centers are offered at Animal Kingdom Lodge, Polynesian Resort, and Beach Club. Contemporary Resort recently joined the list and began offering a new option for childcare which is jam-packed with Pixar fun!  The Pixar Play Zone is a kids-only event designed for children 4-12.  Our grandchildren (ages 5 and 10) recently attended, and both of them agreed they’d love to go again!

Since it’s a parent-free zone, the information shared here is from the reports I received from the grandkids and the questions I was able to ask the cast members when we dropped off the kids.

Pixar Play Zone is located on the 4thfloor of Disney’s Contemporary Resort, right next to the monorail security station and the Fantasia Gift Shop.  It’s brightly decorated and well-marked.  If you’re a longtime visitor to the Contemporary, you may remember it as where the arcade was previously located.  There are glass doors at the entrance, and when you enter you are greeted by cast members.  It appeared they were taking walk-in registrations the night we attended, but reservations are encouraged.  The cast members informed me they could accommodate up to 60 children (which to me would be a little crowded in the space provided) but the night our grandkids attended there were only 28 children registered.  I was told there would be 6 cast members plus a supervisor on duty, so the adult/child ratio made me feel at ease.

Diva Tip: Have your child visit the facilities right next door prior to entering Pixar Play Zone.  There are no restrooms in the Play Zone, and children who do need a bathroom break are escorted to a private bathroom on the 2ndfloor.  While it’s reassuring children would not be sent alone to a public restroom, it does seem a bit inconvenient to need to go down 2 floors to use a private facility. Just go beforehand and hopefully your child won’t need to miss any of the fun! 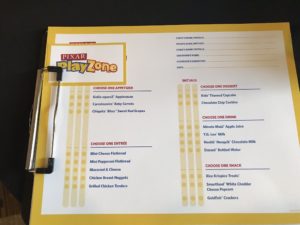 Check in for the evening begins at 5:00, although the official activities don’t begin until 6:00 pm.  Children arriving before 6:00 can play with arcade games, toy kitchens, bean bag toss, or a variety of other toys made available.  As part of the check-in process, the kids were given wristbands and nametags.  They also were able to order dinner – an appetizer, entrée, dessert and drink as well as a snack. (Dinner is included in the price for Pixar Play Zone – $65 plus tax per child for the evening.)  We completed more paperwork on allergies, emergency contact information and who is eligible to pick up the children.  It was stressed that identification will be checked on everyone picking up the kids, we had to have the name listed on the paperwork exactly match the name on the identification. Adults were also given a business card with a direct line to Pixar Play Zone cast members in case we had to reach them while we were gone.  We designated a time for pick-up (any time before 10:30 pm) and the kids were ready to begin their adventure!

Before we left, we were allowed to step inside the Play Zone to get a quick glimpse of the space and to say good-bye, although no photographs were allowed.  I was happy to see each child was given a cubby to store any personal belongings. The back wall was lined with arcade games, all available for the children to use.  There was another long wall lined with toys, and the center of the room had a large flat-screen TV with a dozen or so bean bag chairs for the kids.  I was especially happy to see an area with 3 sinks, all built at kid-friendly heights, for handwashing. There was plenty of space to play, and the kids were anxious to begin their evening. 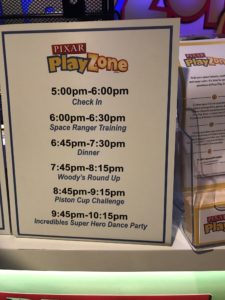 First up for the evening was Space Ranger Training.  From what the kids told me, this involved an interactive game where kids participated in various gross motor skills to help them prepare to fight off a possible attack by Zurg.  Bean bag tossing and marching were apparently involved.

After an intense training session, the troops were ready for dinner, followed by a visit from Woody and Jessie for a special session of Woody’s Round Up.  Our grandkids said they didn’t participate in this session.  Every child has a choice throughout the evening whether they want to take part in the organized activities.  If not, they are free to play arcade games or watch television. So although the kids couldn’t really tell us much about

Woody’s Round Up, our granddaughter did say she saw kids lassoing different objects.  Maybe it’s a good thing they didn’t participate.  All we need is for them to gain proficiency at lassoing each other!

After Woody’s Round Up it was time for the Piston Cup Race.  Each child was given a base for a car, then allowed to build (from Legos?) their own car.  Exact details from the kids on this part was a little fuzzy, but suffice it to say they had a great time with it.  The big take-away from this event was our grandson’s car WON the Piston Cup!  He was so very proud!

The final event of the evening was apparently something to keep the kids energized and awake – a dance party with Mr. and Mrs. Incredible!  I had asked during the drop off if a PhotoPass photographer would be available, and unfortunately Disney is still working out legal issues with this.  They are trying to figure out a way to make it happen, but when dealing with minors photography does have limitations.  It’s a shame they couldn’t have some photos, but I do respect and appreciate Disney’s attention to privacy, especially when dealing with children. 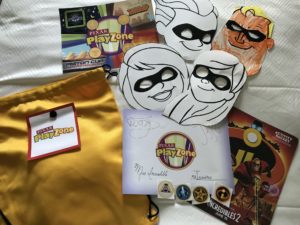 When we arrived to pick up the grandkids, the cast members did in fact carefully check our ID to be certain it matched the information on the kids’ registration forms.  Then they handed us a “goodie bag” for each child, which was a heavyweight (not just thin nylon) drawstring backpack filled with loot!  There was a Pixar Play Zone certificate, which had autographs on the back from Woody, Jessie, Mr. and Mrs. Incredible. There were stickers representing each of the four organized activities for the evening, super-hero masks, and an Incredibles activity book.  The cast members then escorted us into the Play Zone area, and the kids noticed us from across the room, waved, and kept on playing!  Apparently, they were in no hurry to leave! After a couple of minutes, the cast members went over and encouraged them to come greet us. With a few hugs to cast members and excited voices (especially about winning the Piston Cup!) we were headed back to the resort.

If you’d like to hear our granddaughter’s own recollection and comments on the evening, check out the quick video review she did on YouTube.

Overall, the Pixar Play Zone was a big hit.  This was the first time the grandkids had experienced any kid-only event.  We have never left them alone on vacation before, so it was a new experience for everyone!  Given the security, customer-service, and attention to detail Disney provided, we were comfortable letting them enjoy this special evening.

If you’re ready to enjoy a Disney vacation, be sure to contact Patricia at All for Dreams Travel!  She can provide you with a FREE quote and make all the reservations you need!