Planning a Disney Pixar Cars Birthday Party on a Budget 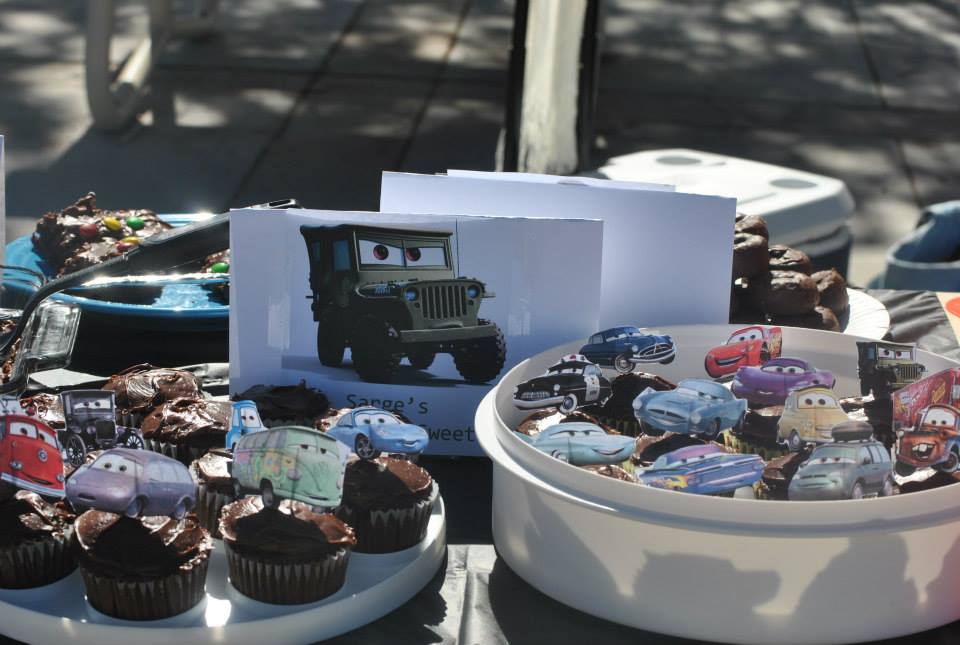 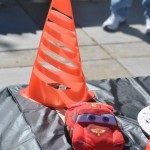 When my daughter had her first birthday party, I came up with an idea for an Alice in One-derland Party. Several of my friends and family members commented on how it was a great idea and a great party, so I know I was setting the birthday party bar pretty high.  When I began thinking about my son’s first birthday party, I wanted to make sure I delivered an equally creative and fun party.

After much deliberation on the theme, my husband decided on a Cars party. So I began playing with party slogans, and came up with: “Dag Gum, (Son’s Name)’s one!” It made me giggle and smile, so the theme stuck.

Once I began planning my son’s party, I hopped onto Google, Pinterest, Hallmark’s Cars Birthday Party Line, and took a look around my kids’ playroom…. Here are some of the ideas that I came up with:

The Location: First, let me tell you that I don’t like cleaning messes. I’d much rather be at a different location for the party, where I can just throw the trash in a garbage can, pack everything up and call it good.

I decided to chance weather and availability, and opted for the park. It was close (only about five blocks from our house), it was quiet (so there would be few people to distract us), it was free (definitely budget friendly and I liked that), it gave all of the kids something to do and didn’t involve destroying my house or making a huge mess in the process. I figured if worse came to worse and the weather was bad, there was a McDonald’s about a mile away, and we could always move it there. Disney Diva Tip: We lucked out, but always make sure you have a backup plan! And if you’re outdoors, bring lots of sunscreen… even in February, I ended up pretty pink. 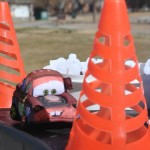 The Decorations: I am all about the decorations. To me, why splurge a ridiculous amount of money on plates, cups, napkins, and other things that are going to be thrown away, when you can focus on other thematic elements that tie everything in together? This is where a lot of creativity and (the help of the internet, particularly Google and Pinterest) can come in handy! For our decorations, we used road cones (not exactly the ones I wanted, but the kids didn’t care and they LOVED wearing them as party hats… the things kids come up with…. But it provided more entertainment, great photo ops, and it helped them serve another purpose), a black tablecloth with strips of masking tape on it to resemble a road, and my kids Toss-Um Mater and Lightening McQueen toys. 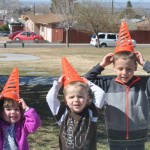 The Food: Since our party was during lunchtime, we opted for the stereotypical fruit and veggie trays, sandwich wraps, bags of chips, bottled water and Capri Suns. We also had food that was more on theme, including Sheriff’s Stoplight Brownies (thank you Pinterest for the Stoplight Brownie idea), Luigi’s Casa Della Tires (miniature chocolate donuts), and cupcakes with pictures of characters that I had printed off, attached to toothpicks, and stuck in them. I also tried to make cupcakes with “cones” on top out of and I was going to call them “Sally’s Cozy Cone Cupcakes”, but let’s just say my cones didn’t look like cones, so we opted the leftovers to just be plain chocolate cupcakes and scrapped the whole Sally’s Cozy Cone Cupcakes thing and they turned into Sarge’s Surplus of Sweets (thank you Pinterest). Disney Diva Tip: Originally I was going to stack chocolate donuts for a Luigi’s Tire theme, but they weren’t really staying, so I stacked a few and just laid the rest out. I recommend getting using skewers or something to help prop them up. You can even prop it at an angle to give it a “Leaning Tower” effect. 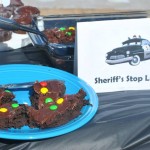 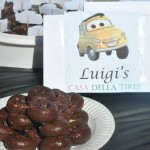 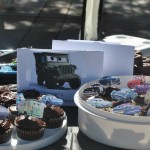 For drinks, I found some sort of green fruit punch (I think it was sour apple flavored) and labeled it antifreeze, and then since my friends and husband all like Dr. Pepper, I bought some and labeled that motor oil. For both of those, I put pictures of Flo’s V8 Café. Disney Diva Tip: Later on, I thought you could also do V8 juice, but seeing as I had already plenty of options, I skipped that, but that would be another good choice (not to mention, healthier). I also wanted to have something “organic” for Fillmore, and immediately thought of iced tea. I chose sweet iced tea, and that worked well. I did experiments with playing with colors (I wanted something hippie-ish), but found this one here. Finally, I love the Route 66 Root Beer Floats at Disney’s California Adventure. This inspired me to buy a bottle of A&W Root Beer (my favorite soda of choice), and re-label it “Route 66” Root Beer. 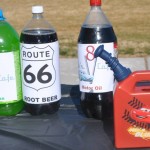 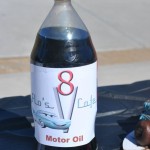 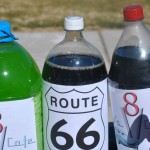 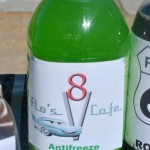 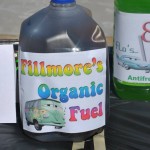 Games: I had lots of ideas for this one… Red Light, Green Light, having races with toy die-cast cars, having races with the kids in cardboard boxes or laundry baskets, having a station where we put on washable Cars tattoos and calling it Ramone’s House of Body Art, etc., etc., but in the end, we only had one game- “Pin the Headlight on Mater.” I fell in love with the idea.  I found it at Walmart and the game came with a giant plastic sheet that had an image of Mater on it, along with different colored circular stickers that were supposed to be the “headlights.” It didn’t come with a bandana, mask, or anything to cover the eyes, so I just brought a scarf from home and used that.

The Cake: My husband is very artistic. Since the theme was “Dag Gum! Little Man’s* One!”, I knew we needed a Mater cake.  I was originally envisioning Chocolate graham crackers to build a truck bed around chocolate cake, but after watching me attempt to construct it, my husband offered to take over (most likely for fear of an impending cake disaster that would send his wife into a nervous breakdown), and the next thing I knew we had a Mater masterpiece! Since we had variety of illnesses going around our house at the time of my son’s birthday, we ended up having his party two weeks afterwards. So not only did my husband make a Mater cake for Little Man’s real birthday, but he duplicated it for Little Man’s party two weeks later. That is love right there. Disney Diva Tip: Even though we were having a small party, my husband was worried that there wouldn’t be enough cake for everyone, so I ended up making two dozen cupcakes (as mentioned above). To make the cupcakes festive (with minimum work), I used clipart (mostly from this site here) and printed them off. I then cut them out and taped them to toothpicks and stuck them out into the cupcakes. If you want to make this easier, you can pick one (or two) characters to emphasize and just make a bunch of those. This also helps prevents arguments over who gets which character. 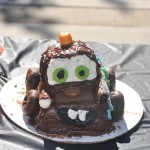 * Note from the Character Diva: To protect Little Man’s privacy, I didn’t write his real name here. However, for the party decorations, invitations, and so on, we did. So everything said, “Dag Gum! Name’s One!” 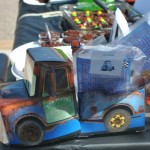 The Favors: In the past for my daughter, I found coloring books with the theme from the Dollar Tree, and usually tossed in goldfish crackers, juice boxes, bubbles, stickers, and so on that I’d pick up at either Target or Walmart. This time, I have to admit I went with the pre-packed Hallmark favors, and put them in some leftover clear plastic goodie bags we had from previous parties. I did throw in some leftover Cars themed tattoos that came with some Valentine’s Day cards I had bought at the Dollar Tree. To make the bags a little more personalized, I also went and printed more clipart images, along with each child’s name, and attached them to the bags for a little more personal touch. Disney Diva Tip: If you have a bigger budget, I found a great Step Up to Reading book on Amazon, called “Mater’s Birthday Surprise!” We bought it as a birthday gift for our son. 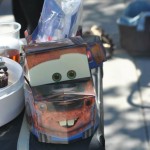 The Thank You’s: Okay, I have to admit it, I didn’t quite getting around to what I had in mind, and ended up just using your standard thank you cards from The Dollar Tree. However, what I had intended was to make a photo card with Little Man’s picture on it, as well as Lightening McQueen and Mater’s. They had a template available at Walmart.com, however I wasn’t very happy with it (mainly because I couldn’t arrange and format things the way I wanted to, and decided to save the money). If  YOU are up for the challenge, I think this would be a fun way to wrap things up. 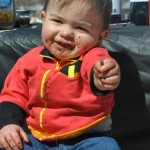 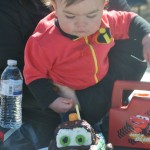 Have any of you ever thrown a Cars themed party before? What were some of the things you did to make it a magical experience? And are you planning an upcoming Disney themed party? Check out these other birthday party themes and ideas below:

And are you planning a Disney birthday party at a theme park? Read our tips here for birthdays at Disneyland and Disney World.