Planning for Disney World with a party of 10! 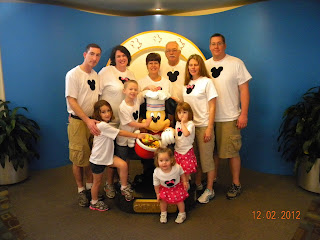 Disney World did not know what hit them the first week of December.  Jersey parents (2), Jersey sister and her family (4) and Jersey Diva and my family (4) arrived in Disney on December 1.  As I mentioned in my last article, I was the primary trip planner.  Trying to take everyone’s interests and ages into consideration was a bit tough, but I think it all worked out well.

Day #1
We arrived at our hotel, Pop Century, got our rooms and had some lunch.  After lunch, we hopped a bus to Animal Kingdom.  None of us had ever been there and we knew it was a park we didn’t really want to spend a whole day in, so it made for a perfect “day we arrive” park.  Unfortunately, Expedition Everest and Kilimanjaro Safaris were both closed that day so we weren’t really left with much to do.  We did have a reservation for the Tusker House, which we were all less than thrilled with, so after dinner we decided to head back to the hotel…it had been a very long day and we knew the rest of the week would be just as long. 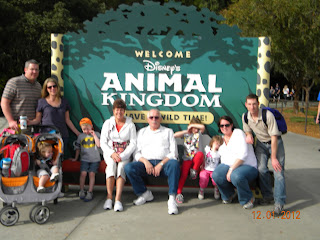 Day #2
Matching shirts day!!  I made all of our matching shirts because I wanted us to be “that family.”  🙂  We got many compliments on them, although I think most of the compliments were on my shirt because I had the Mickey head with the question mark on my belly. We left our hotel on a bus headed from Magic Kingdom.  We then walked over to the Contemporary Resort to have breakfast at Chef Mickey’s and we were not disappointed one bit.  It was one of the best meals we had all week.

Can we just talk about the Breakfast Pizza real quick?  Oh my goodness!?!?!  How good is that stuff?  It’s the only thing I ate the entire breakfast and I had to stop myself from eating more.  De-li-cious!

After a fun-filled breakfast with Goofy, Pluto (my favorite!), Mickey, Minnie and Donald, we headed to the Monorail for a little ride.  After a few monorail stops we were back at the Magic Kingdom.  We stayed and played at the Magic Kingdom for a few hours before heading back to the hotel for a nap for the little ones (and pregnant one) and swim for the older ones after a quick bite to eat.

After naps we headed to Epcot because we wanted to check out Illuminations.  What a show!?!?!  It’s one of Jersey husband’s favorites so it was a must on our list of things to do.  Unfortunately, the only child who saw it was youngest Jersey daughter(2).  The other three (6,4,1) were all sound asleep in their strollers.  Nonetheless, it was a great show and the adults enjoyed it.  Back to the hotel for sleepytime for all! 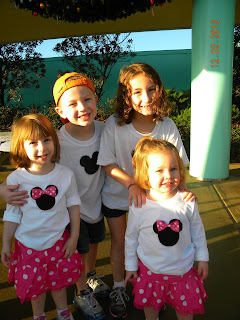 Seriously, how cute are these 4 in their matching shirts?

Day #3
We boarded a bus headed back to Epcot after breakfast at the hotel.  We weren’t in any sort of rush because we didn’t have dining reservations till 3 at Akershus in Norway.  We headed straight to Soarin’ which only had a 30 min wait.  Myself, Jersey sister and the two younger ones sat this one out.  We did, however, do a Rider Swap so we could ride when the rest of the group came off. After Soarin’ we headed over to ride Nemo.  That was all the kids were asking for that day, so how could we say no.  After Nemo, we thought it would be the perfect time to walk through the countries and get the kids to nap in their strollers.  Jersey husband, sister and brother-in-law decided to “drink around the world.”  Since I couldn’t partake, I thought I would “eat around the world.” 🙂  Falafal anyone?  Not the best thing I have ever eaten, but I tried it and that’s a lot for me. 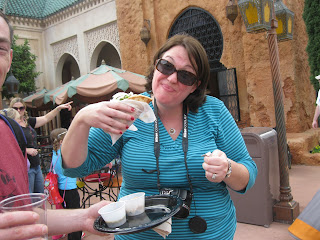 We finally arrived in Norway for our dining reservation at Akershus . The Jersey daughters were so excited to meet the princesses. 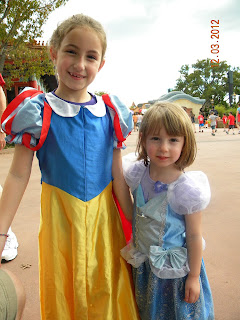 The meal was really nothing to write home about, don’t get me wrong, it was edible, just wasn’t the best of the week.  It was all worth it just to see youngest daughter’s face when she got to meet Cinderella…(Disney Diva recommends you ALWAYS eat BREAKFAST at Akershus instead of lunch or dinner… which are oh so very.. ummm Norwegian.) 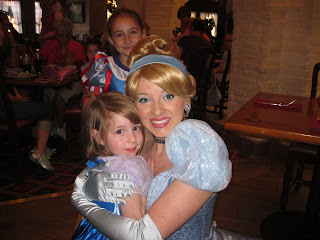 Priceless!
Jersey nephew was not at all thrilled by this meal but I had something special planned for him for tomorrow.  Gotta make sure everyone was happy.  After lunch/dinner we walked back through the countries again and then headed back to the hotel.  It was another long day for Jersey family and tomorrow was going to be a late one.
Day #4
After breakfast at the hotel, we headed out to Downtown Disney to do a little shopping and just have a relaxing morning.  At night, we were headed to Mickey’s Very Merry Christmas Party so we didn’t want to over do it.
Oldest Jersey daughter recieved some Disney gift cards for her birthday so she was excited to spend it and that’s just what she did.  She bought these cool sunglasses. 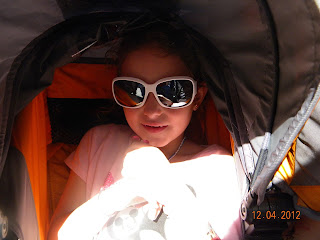 We also got to take out picture with Santa, after barely any wait.  Youngest Jersey daughter was not so thrilled…she insisted on keeping her sunglasses on. 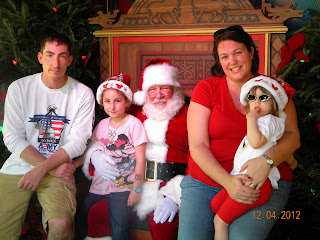 She also insisted on having mommy and daddy in the picture.  Small price to pay to get a picture with Santa. Afterwards, we all headed to T-Rex to have lunch.  Jersey nephew LOVED this place. 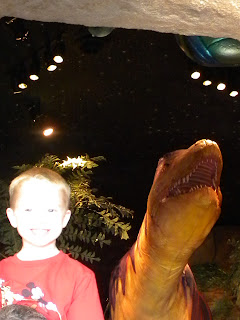 This made up for the whole Princess lunch/dinner the day before. 🙂  Let me say, this was a fantastic meal!  You got so much food and it was all so yummy.  Definitely worth a visit!  After lunch we headed back to the hotel for some naps and swimming.
Next, we took the bus to Magic Kingdom for (Mickeys Very Merry Christmas Party) aka MVVCP.  What a wonderful experience.  The adults didn’t get to see too much of the parade but the kids did (from atop our shoulders) and that’s all that matters.  It wasn’t even planned…we just happened upon it.  My favorite part of the whole party was Holiday Wishes!  What a fantastic, out of this world, wonderful, extraordinary (you get the idea) show.  We ended up setting up shop just off of Main Street and it was perfect!  We were in direct viewing of the castle and the “movies” they play on it.  Oldest Jersey daughter still talks about the “movies on the castle.”  It was breathtaking!  We also had a 360 degree view of the fireworks.  Best show all week, hands down. 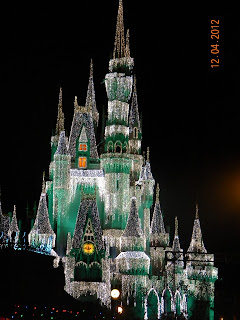 We left right after the show, since 2 of the 4 kids were already asleep….note: their of the 2 were mine.
Day #5
Time to visit Hollywood Studios.  Another of oldest Jersey daughter’s favorites from the trip…Tower of Terror.  She would have gone on again and again had we had the time.  We spent the whole day in Hollywood Studios and did everything.  From the American Idol Experience to Disney Junior Live on Stage and everything in between.  Youngest daughter and I even took in Beauty and the Beast Live on stage.  She loved it!  After half a day of going strong we stopped for our dining reservation at Hollywood and Vine.  Another fantastic meal…seriously, we considered going back for dinner, it was THAT good.  The kids loved meeting Oso, Jake, Anne and Handy Manny.  Oldest daughter was dressed as Izzy and she was very happy when Jake pointed to her when someone asked where Izzy was….she still talks about it. 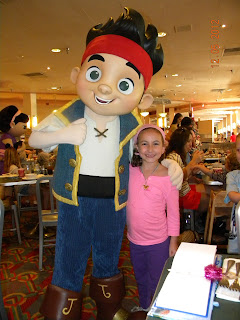 One requirement Jersey mother had for our trip was seeing the Osborne Family Lights.  That’s it, that’s all she wanted.  Well, she got her wish!  Another great show.  We have never seen SO many lights.  Another plus, all 4 of the kids were awake for it!  🙂  We got there just in time for them to flip the switch and it was an experience I will never forget.  Jersey daughters’ (and Jersey mother’s) eyes lit up with the lights.  Pictures cannot express just how beautiful of a site it truly was. 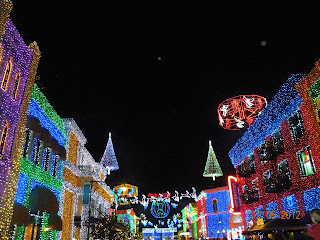 This is only part of it!
We stared at the lights for a bit and then headed back to the hotel for dinner and a movie for the older kids and bed for the younger kids (and the pregnant chick).  Another fun day for the books!
Day #6 – Last day 🙁
Sadly, it was our last day.  We decided the only place we would want to spend our last day is Magic Kingdom.  We had another wonderful day playing around in the Magic Kingdom and we stopped for lunch at Tony’s Town Square Restaurant…another good choice!  Youngest Jersey daughter started to get crazy at the end of lunch (WAY passed nap time  so I took her outside for some air and to walk around a little bit.  I saw people starting to get in spot for the parade so I joined them and scored us the best “seats” on Main Street.  What a wonderful way to end our wonderful trip! 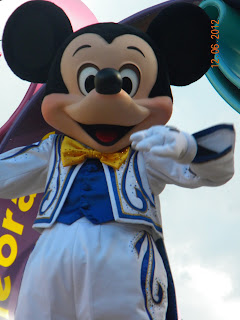 We got to say “Goodbye” to Mickey, face to face!  Can’t beat that!  We hung around Magic Kingdom still around dinner time and then headed back to the hotel for dinner and bed…we had an early wake-up to head home.
All in all, I think it’s safe to say, I did well. 🙂  At least, my family thinks so.  Planning a trip for 10 people with 10 different ages, interests, etc. can seem like an impossible task.  It’s not!! At least not at Disney World, the happiest place on earth!  We all had a wonderful time and wish we could do it again sooner rather than later.  Maybe once Jersey baby is old enough to appreciate it, we will do it all again…11 of us!
~Jersey Diva
Share this...