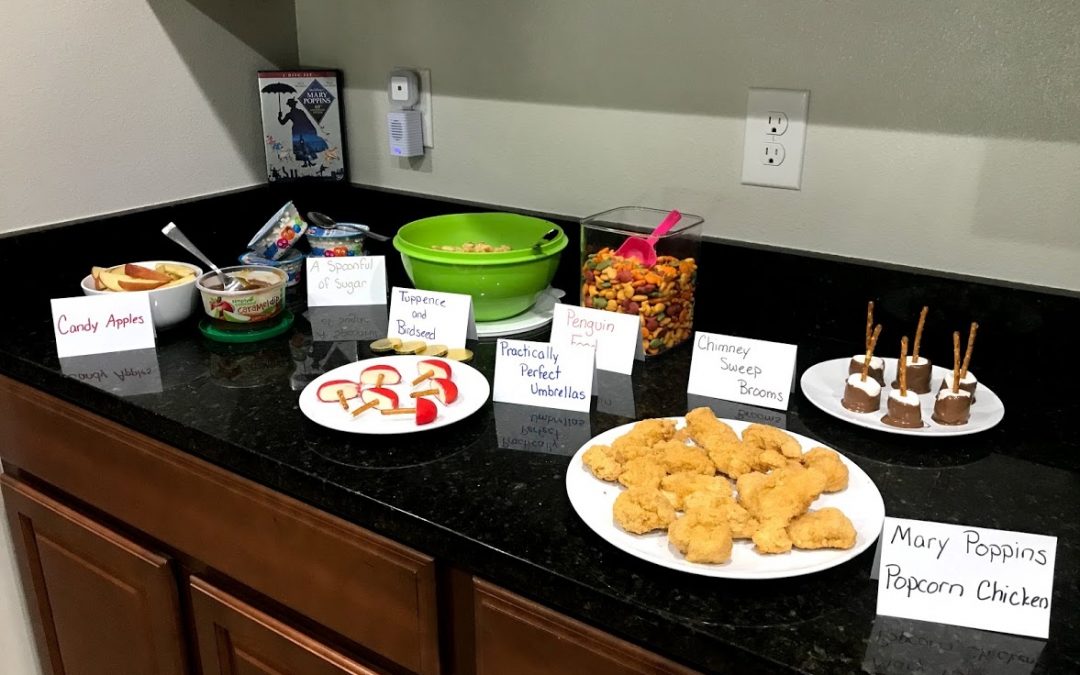 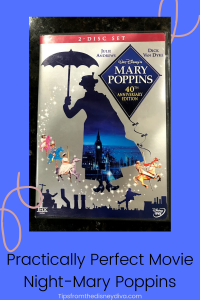 We have been spending a lot of time at home lately.  That means we have eaten almost every meal at home.  It was getting tiring.  There needed to be some way to get excited about cooking dinner for the millionth time. 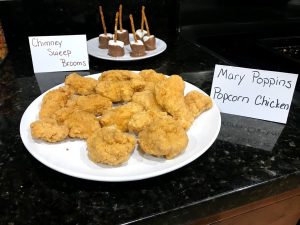 Now, it had been a few years since I had watched Mary Poppins.  I remembered quite a bit and my fellow Diva’s helped me out with a few great suggestions.  Keeping it simple was my main goal.  There couldn’t be too much prep or clean up.

The first thing I needed for my Practically Perfect movie night was the main dish.  Mary Poppins is not a movie about food, so I had to get creative.  I thought about sandwiches and doing a tea party theme.  But, we eat a lot of sandwiches for lunch so I wanted to stay away from that.  Getting creative with Mary Poppins name I went with Mary Poppins Popcorn Chicken.  I bought a bag of frozen popcorn chicken and had my main dish.

Next up was sides.  A fruit or vegetable was first on the list.  Once Mary Poppins wins the horse race Burt, Jane and Michael are eating candied apples.  Perfect!  I grabbed a bag of apples and a container of caramel.  Not exactly candied apples, but they did the trick.

One fun scene includes Mary Poppins, Burt, and a few dancing penguins.  While they do not eat fish in the movie, I did pick up some goldfish crackers as Penguin Food.  The goldfish could be used as snacks throughout the week as well. 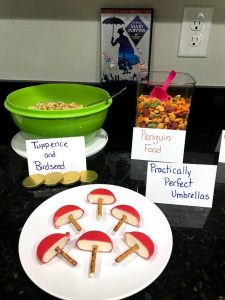 Disney Magic Diva gave me her recipe for Birdseed using oyster crackers.  This was perfect as Michael wants to use his tuppence to feed the birds when he and Jane go to work with their father.  I happened to have some gold coins leftover from St. Patrick’s Day and called them tuppence.

Mary Poppins umbrella is an icon that needed to be added it to the dinner.  But again, I wanted to keep everything simple.  Searching through Pinterest I found you can use Babybel Cheese, cut in half, with thin pretzels as handles.  They didn’t look exactly like umbrellas, but they still did the trick.

My favorite scene in the movie is Burt as a chimney sweep. He takes the kids, followed by Mary Poppins, up onto the rooftops.  The dancing with the brooms mesmerized me as a kid.  I knew I wanted to add them to the dinner.  There are many different ways to make edible brooms.  The recipe I decided to use included marshmallows, milk chocolate chips and the same thin pretzels I used for the umbrellas.  I stuck the pretzels into the marshmallows then dipped them into the chocolate I melted in the microwave.  These were the kids’ favorite. 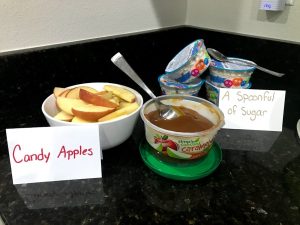 Candy Apples and Spoonful of Sugar.

Now, we couldn’t watch Mary Poppins without a little Spoonful of Sugar.  I wasn’t sure what I wanted to use.  There are a lot of recipes out there, but I really wanted something that I wouldn’t have to spend all day making.  As I was picking up ice cream from the store I saw what I was looking for-Dippin Dots!  They were an off-brand, but that was fine.   Dinner was done!   I do have to confess that these were not very good.  They did not taste like Dippin Dots.  My husband described them perfectly as stale ice cream.  Luckily, I had bought actually ice cream and we had that instead.  Not exactly Practically Perfect, but close.

Passholder Diva suggested Rum Punch to go with the meal.  This was a perfect suggestion.  When Mary Poppins has the kids take medicine it is three distinct flavors: lime cordial, strawberry, and rum punch.  These could be added as drinks to finish up the Practically Perfect Movie Night.

We all had a great time watching the movie and having dinner.  Overall, it was a fun way to hang out as family and change dinner up a bit.  If you are looking for a feel-good family movie experience I highly suggest throwing your own Practically Perfect Movie Night.