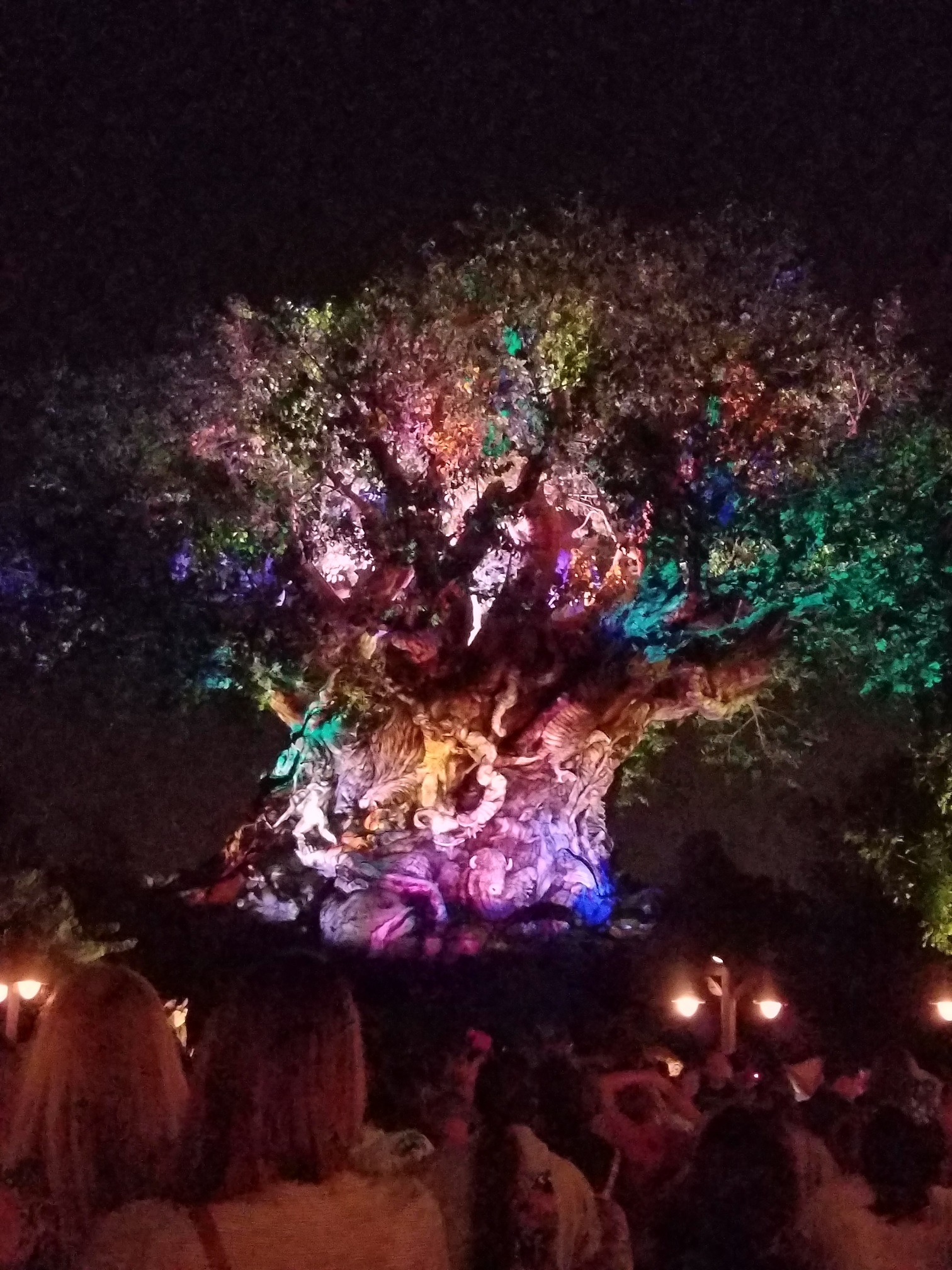 One of the many perks of being a Cast Member at Walt Disney World is that when new offerings come around, you are often asked to be a test dummy. This way if any glitches arrive, the audience is more understanding and carefree than someone who just paid $1000 dollars to experience something and have everything go wrong. Plus this gives the working cast an idea of what to expect when guests start to roll in. I was lucky enough to get to go to a preview night for Disney’s Animal Kingdom “Summer Awakening” as they are calling it. While I was a little bummed we didn’t get to preview Rivers of Light or The Jungle Book: Alive with Magic, we were really excited to see everything else, plus they threw in free ice cream! 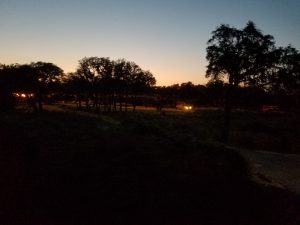 The view of the savanna

The first thing we did was head straight back to Kilimanjaro Safaris. For they event they had passed out reservation times (aka Fastpasses) for the safari and if you didn’t have one, you weren’t guaranteed to get on one. Since we didn’t get a reservation time, we figured our best shot would be to head straight back and figure out what we needed to do to try and ride. Lucky for us, after just a short wait they opened up the standby line and since we rushed back there, we were the third party in line.

I will say the night safari is a very different experience. It seems like they have added new sounds it, really making sure you are immersed into the safari experience; one of them even startled our guide a little! They have added a lot of new lighting, which sets the mood while obviously helping you see the animals. It was definitely still hard to see a lot of animals, but at the same time I saw some animals in a way I had never seen before. We didn’t get to see any Black Rhinos, but the bongo were right next to the road grazing, which I had only ever seen from afar. 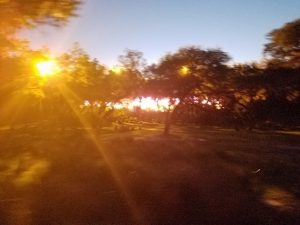 I think the lighting over the savanna was my favorite. They had a huge wall of lights to make it look like a beautiful sun set, and having the sun set made the animals react differently. I finally got to see the hyenas which share the same habitat that the wild dogs use during the day. Most animals were doing more than laying around like they do during the day, and it seems like they were a lot closer to the trucks. Many of them were also a lot closer together, drawing their herd in for the night, which meant that instead of only one or two animals, we saw a lot of them. You also get to take a slightly different a path. After the savanna, instead of going over the rickety bridge and though the mud walls that tell you that you are in elephant territory, you cut though the savanna into elephant territory. Undercover Boyfriend tells me this is the same path that the Wild Africa Trek takes. 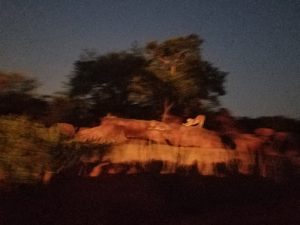 Bad picture, but an awesome shot

I think my favorite part of night safaris was getting to see the lions. Everyone wants a good view of the lions and during they day they usually do nothing but sleep. Some times in the morning you are lucky to see them before they start their cat nap, but it’s nothing compared to this. They were up and around, walking, stretching and really reacting to our safari truck as we went by. I think I could have sat there for a while and watched them.

The only two downsides to night safari is that there are some animals you just won’t see and that taking pictures is much harder. There were no lights on the cheetahs and I’m not sure if this is a permanent decision due to their behaviors or if it was a temporary thing because they just aren’t finished with the lighting or that it was malfunctioning. I also made sure to bring my nice camera with me but ended up using my cell phone for pictures because of the night setting it had on it. They ask you not to use the flash option and while I like to dabble in photography, I’m not good about knowing which settings to use and when. 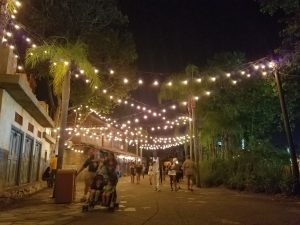 After the safari, we headed over to Asia to ride Expedition Everest.

We had the opportunity towalk through the new amphitheater for Rivers of Light, though we decided against it because it looks just like the Fantasmic! Amphitheater but with Asian flair. 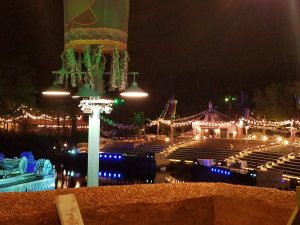 A view of the theater

The wait for Everest was well past the door, but since they were posting a 20 minute wait, we decided it was worth the risk. This is why we as Cast Members really dislike the Fastpass system- that is what is making the wait times longer. It would be much better to get rid of Fastpass all together and make everyone wait equally than benefit a few people and make everyone else wait twice the time. I think we ended up waiting just about 20 minutes, maybe less, because every train was filled from the standby line, just some food for thought. As for Everest, I loved it, though it was definitely scarier and faster at night, and as someone who suffers from motion sickness, I got more sick than I normally do when riding Everest. The Yeti definitely seemed bigger and more life-like because your eyes are adjusted to the dark and you don’t have to try and focus in quickly. It is definitely a must do once the transition to nights is fully open.

My crazy friend decided that he wanted to hit up Kali River Rapids as well, which was a surprise attraction for the night. I really only like going on this ride when it’s hot and I have the sun to dry me off if I get soaked, but since it was the last thing we were doing, I let him talk me into it. The three of us walked thought the queue with absolutely no wait and ended up with a raft to ourselves. We made sure to distribute our weight evenly and let fate decide who would get wet. I have to say, I did enjoy it, especially because I got the least wet of the three of us, and my friend who made us go on got soaked. The scene depicting the damaging effects of logging really stood out in the dark and made us go silent for a minute, before quickly realizing the big drop was coming up and one of us was gonna get it. We weren’t sure whether they turned the water down so the splashes weren’t so big, or if it was just due to us having a lighter than normal raft but the big drop was not as overwhelming as it normally is. In fact, my friend didn’t get soaked until one of the fountains right after the drop that ended up getting him straight on. They offered to let us ride again, but we didn’t want to take our chances and we wanted to check out the tree before the event was over. Also, I thought I should mention this because Undercover Boyfriend didn’t even know about it, they have lockers you can use for Kali River Rapids, right next to the bathrooms. They are free for the first 2 hours and after that it’s $7 an hour. It seems like a great deal to me, but I don’t know how many people know they are there! 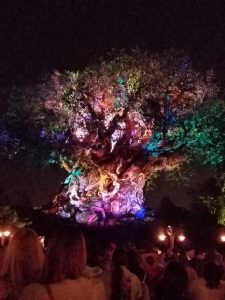 The projection show on the Tree of Life is an awesome new feature! It’s a lot like Celebrate the Magic on Cinderella Castle in Magic Kingdom, though it runs all night and is much more diverse. It isn’t a show in the same way Celebrate the Magic is, instead animals on the tree will seem to wake up and come alive by yawning and stretching for a quick peak and then going back to sleep. The Tree also depicts all four seasons and has several little five minute scenes that get played. Unfortunately the timing of these shows is truly random, you may wait 20 minutes between shows and you may wait an hour. We heard people taking around us who said they had been waiting 20 minutes for something to happen and the scene we saw didn’t run until about 15 minutes after we got there. The small displays happen more often but really are no more than maybe 30 – 45 seconds long. 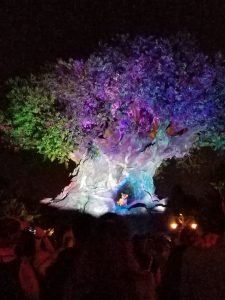 A still of the show

Overall, I’m really excited for Animal Kingdom to welcome the night! The new offerings are very exciting and the park is very pretty after dark. I think it has easily become my new favorite park after dark. It’s funny that Animal Kingdom just celebrated it’s 18th birthday this year and for it’s birthday it got a new curfew! It really is turning in to a fine young adult.

If you’re ready to book your next trip to see the nighttime magic, Tips from the Disney Divas & Devos recommends Patricia with All for Dreams Travel. Click here for a free quote!