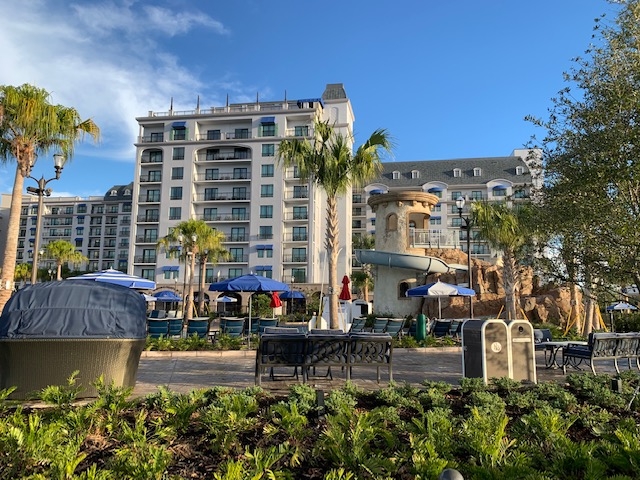 The Disney Skyliner is truly a gamechanger at Walt Disney World, opening new vistas (literally!) and opportunities. While Disney provides transportation to the four parks and Disney Springs, it does not provide transport between resorts unless you happen to be staying in one of the resorts serviced by the monorail. In the past, if you wanted to explore another resort, unless it was within walking distance, you had to painstakingly go there via one of the parks or take a taxi or a rideshare. 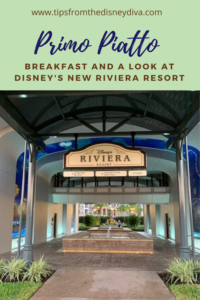 But now, if you are staying at one of the four resorts with a Skyliner station – Pop Century, Art of Animation, Caribbean Beach, or the Riviera, you can easily resort hop within minutes. On a recent stay at Pop Century, my younger daughter and I decided to check out the newly opened Riviera resort and have breakfast there. 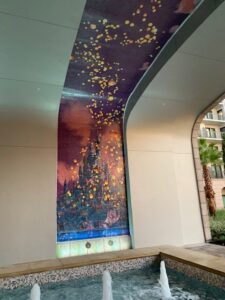 Lovely mosaics of scenes from Disney films greet you as you make your way into the resort from the Skyliner.

Open only since December 2019, the Riviera is the newest Disney Vacation Club property. It is a high-rise style building that is “inspired by Europe and imagined by Disney.”

If you take the Skyliner to the resort, you will enter from the side and must make your way across the property to find the lobby and dining areas. While the grounds are well-kept and beautiful, they are not overly Disney themed. In fact, we didn’t see any Disney touches aside from some magnificent mosaics along the way.

There is also not a lot of signage on the property, and we wandered around a bit before we found the lobby, which is confusingly on the second level when you enter from the Skyliner station. The lobby is elegant but very understated, and not particularly grand (especially when compared to other Deluxe resorts like Animal Kingdom or the Grand Floridian). My daughter commented that it looked like a Marriott or another chain hotel, and I think I might agree. 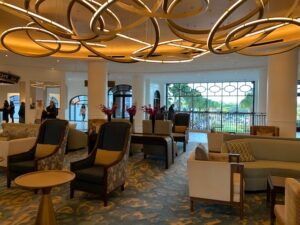 The lobby is (very) understated and elegant.

La Boutique, located in the lobby, features a lot of resort-specific clothing and other items, which harkens back to years ago when each resort had its own merchandise instead of generic Disney products. There are a few pricey groceries/sundry items since this is a DVC property.

We were pleased to see a fancy coffee bar, La Petite Café, in the lobby. Not only did it have some pastry items, but it also served many different kinds of plant-based milk (something that my daughter had a hard time finding anywhere on property other than Starbucks).

Eventually, we made our way to the Riviera’s counter service restaurant, Primo Piatto, located one floor below the lobby and facing toward the resort feature pool and the lake.  Since the restaurant had just opened at 7 am, the place was empty. However, it is quite small and I could see it easily becoming very crowded at peak times of the day. 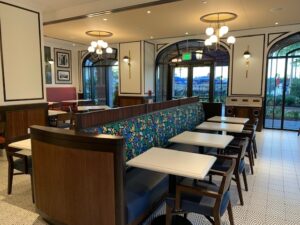 Much like the fast-casual Wolfgang Puck Express location in Disney Springs, you place your order at the register and then a server brings your food to you on real plates with a cloth napkin.

There are counter height and regular height tables and some booths. Some of the tables have charging ports for phones. The décor is marble and rather stark, but I loved that the walls are covered in Walt Disney’s photos from his trips to Europe.

While there are several intriguing breakfast items on the menu, my daughter and I both decided to try artisanal pizzas, which are hearth-baked in the open kitchen. 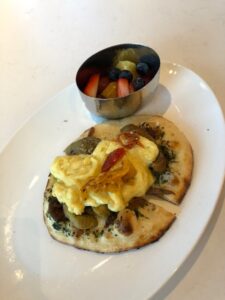 My daughter is a vegan, and there were two plant-based entrees to choose from. She got the Farm-Fresh Breakfast Artisanal Pizza ($10.29) which is Fresh Plant-based Artisan Hearth-baked Pizza topped Carrot-top Pesto, Plant-based Mozzarella, Eggplant, Red Onion, Roasted Tomato, and a Plant-based Egg Scramble. This comes with a side of fresh fruit, which was a mix of blueberries, strawberries, grapes, and an orange section.

This was pretty good, but both my daughter and I agreed that plant-based eggs have a weird, slightly rubbery texture.

My daughter also had fresh strawberries and she noticed that they were less expensive than at the food court at Pop Century and had their stems trimmed so that she ended up with more berries in the same size container.

I ordered the Spinach and Egg Artisanal Pizza ($10.29) which is Fresh Artisan Hearth-baked Pizza topped with Ricotta, Feta, Spinach, and a Soft-cooked Egg. I asked them to scramble the egg instead of leaving it soft-cooked. It also came with a side of fruit.

While I liked the consistency of the dough and liked the toppings, this just did not have enough seasoning for me. It needed a sauce of some sort or more herbs and spices. 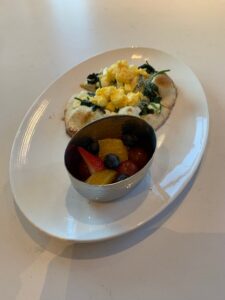 The Spinach and Egg Artisanal Pizza

Primo Piatto has a small bakery section with an espresso bar and a separate register. There are cold cases with drinks, fruit, and some grab and go items. I noticed that grab and go items were more gourmet than their Pop Century counterparts: for example, there was a selection of cheese and fruit and a charcuterie plate.

After finishing our meal, we wandered around the grounds a bit more. Right outside the restaurant is a bocce court, and we saw some kids trying it out. There was also a life-size chess set across the way.

The feature pool was nice, but not on an equal footing with the Yacht and Beach Club’s Stormalong Bay or even Wilderness Lodge’s main pool. 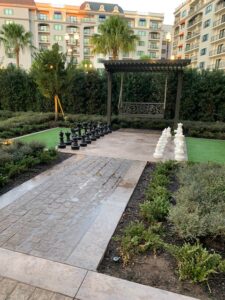 The lovely grounds feature a bocce court and this huge chess set.

I did not get to see inside any of the accommodations, but I have heard that the rooms are very nice.

Overall, the Riviera seems like it is a lovely addition to Disney’s lineup of resorts. Due to its slightly bland décor, it would probably not be my first choice for a deluxe resort, but its location on the Skyliner definitely ups the ante.

Are you ready to plan a stay at Disney’s Riviera Resort?  Patricia at All for Dreams Travel can help you plan ANY Disney vacation!  Contact her today for a free quote!