Question: 4 DAYS OF DISNEY, WITH KIDS, WHAT SHOULD WE DO? 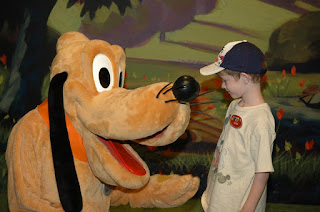 Ms. Jessica has a question I think many of you might be struggling with. So here’s her question and my reply.

I was wondering if I could pick your brain for some advice for our trip…. We aren’t planning on going until October 2012, but with four kids we need to plan WAY in advance to make it easier financially and also on my stress levels. J Your blog totally makes me laugh because I can hear and see myself in a lot of your writing!! I love it. J

Anyway, we basically planning to surprise our kids with our first trip to Disney World for their fall break. We are going from Saturday – Saturday, so a whole week. We want to do 4 days of Disney and then have the other days to do Sea World and the beach. My question is – how do you recommend spending those four days at Disney? Should we do one day at each park? Or should we do 2 days at Magic Kingdom and figure out a park to cut? I’ve heard we could skip Epcot because it’s kind of boring…What are your thoughts? By next year we will have an 8 year old, 7 year old, 5 ½ year old and 2 year old. My mom and my husband’s mom will also be coming so we’ll have Grandmas with us too.

Thanks again for any help you can give. You have no idea how nice it is to get advice from someone who knows the lay of the land!!

You’ll need at least 1.5 days in Magic Kingdom easily, two ideally! You have a few options after that.

First of all you probably wont really have THAT much you’ll want to do at Animal Kingdom with kiddos that age. Its about a half-day park for me. With kids that age you’ll most likely want to do: K. Safari, Lion King show, Finding Nemo show, The Boneyard and maybe some character stops.
Same with Hollywood Studios, its about a half day park for us. Especially with them being so young, unless they’re addicted to thrill rides, which is totally possible. 🙂 You have to knock out Toy Story Mania first thing, then maybe Star Tours (for the 8 year old), Little Mermaid show, Beauty and the Beast, Playhouse Disney, and character greetings.
You only really need to do the FRONT part of Epcot, World Showcase seems to hold less appeal to most children. You’ll need to do Soarin’ first thing, then maybe Test Track, Seas with Finding Nemo, Turtle Talk with Crush, Imagination with Figment. And, you guessed it, Character greetings are optional here (there are a lot of great characters in World Showcase).
So my suggestion? Get Park Hopper tickets so you can switch days then do:
Day one: Magic Kingdom All day
Day two: Hollywood Studios in morning, Magic Kingdom in the evening.
Day three: Epcot first thing in the morning, Animal Kingdom then relax (that park closes early), but you could easily go on to Magic Kingdom after that park closed if you want and then relax when you’re at the beach 😉
Share this...