Raya and the Last Dragon: Is it Worth the Purchase? 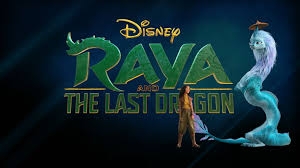 We are lucky enough to be living in the age where movies and shows are sent directly to our home television sets via the internet. Long, long gone are the days of visiting the movie rental place on a Friday night to pick your viewing titles for the weekend. This week, Disney+ gained a new title: Raya and the Last Dragon. Now, 98% of the library is available with your subscription on Disney+, but this one will cost you extra. 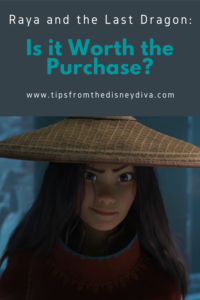 For a few new movies recently, Disney+ has required a Premier Access purchase of $29.99 to view along with an active Disney+ subscription. The previous movie that Disney+ did this with was the live-action Mulan. While my family did not purchase the Premier Access for Mulan, I am very glad that we did for Raya and the Last Dragon.

The movie takes us to a fantasy world of Kumandra, where people and dragons lived together in peace many years ago. When an evil force, called the Duun, threatens the land, the dragons work together to protect the people. Ultimately the dragons end up sacrificing themselves to protect the people and cease to exist. Fast forward 500 years and we meet Raya. She and her family are in charge of protecting the dragon gem stone (the last remaining dragon magic) while continuing to fight off the Duun. When Raya’s father invites the people of the other region to come together and unite their nations, the gem stone gets broken and scattered amongst the nations. Raya works for years to find the pieces and the last dragon to bring the world back together and restore those who have been turned to stone. 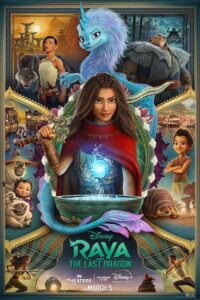 Along the way Raya meets a group of unlikely heroes in each region, including a street-savvy entrepreneur named Boun, the giant warrior Tong, a thieving toddler and her band of Ongis and of course the magical dragon Sisu.

Once again Disney truly hand picked every individual in this movie when it came to the cast. Raya and the Last Dragon features Kelly Marie Tran (Star Wars) as Raya, Nora Lum (aka Awkwafina) as Sisu and Gemma Chan (Crazy Rich Asians) as Namaari. Those voices are joined by a cast of extremely talented voice actors as well.

The soundtrack to this movie is definitely one I will be listening to. While it is interesting that as a Disney movie, there were no musical numbers in this film, the soundtrack is still full of beautifully written instrumental music that is perfect for every day background listening. Each track on the soundtrack is titled for the scene of the movie that corresponds and believe me, it does not disappoint. I have already added it to my favorites on Spotify!

I would highly recommend Raya and the Last Dragon to anyone considering. The only thing I would suggest parents take into consideration before watching is the fighting in the movie. There are several scenes with sword fighting and hand to hand combat that are worth noting. Other than that I think the PG warning is fair. My 2 year old was a bit spooked by the Druun turning people to stone and needed some comforting, however my 4 year old just had lots of questions while watching. 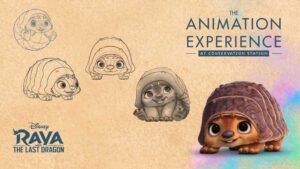 Overall, the end all answer to the question posed at the beginning of this article is a resounding YES! My family would have definitely paid to go and see this movie in the theater, so when you factor in the price of theater tickets, gas to get there and snacks, paying $29.99 to watch it as often as we’d like is a total steal!

This movie gets a 10/10 in our household and we will be watching many more times in the week to come!