Relaxing Before the Magic Begins at the MCO Hyatt 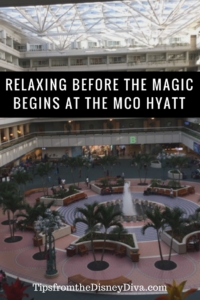 Relaxing before your Disney vacation starts in Orlando is that possible? When leaving for vacation everyone is very anxious to just get there. How many times do you get asked, are we there yet?! My family travels from Connecticut so our day is filled all day with travelling. Typically, we fly out of a smaller airport, as I find it easier to manage with four kids, two of them being infants. One thing I hate worse than departure day is arrival day, which may sound weird to some. On top of everyone being so anxious to get there, everyone is so exhausted when they finally get there from traveling. We hurry up and wait all day long, driving to the airport, getting through security, loading the plane, getting off the plane, waiting for the Magical Express, and when you finally arrive at your Disney resort who has energy to do anything. 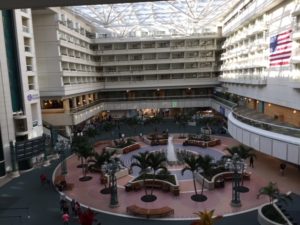 So last trip I had the idea to book a room at the Hyatt at the Orlando International Airport so we could start the next day refreshed. My plan was we would land, have a late dinner, shower and head to bed, sounds like a good plan? Well we all know things don’t go as planned either. Our flight was delayed before we even left for the hour ride to the airport. Knowing things could change and hoping they would we left anyways. More notifications came in that we were delayed later and later so we made sure we stopped to have something to eat on the way to the airport. Long story short, when we finally arrived at Orlando International Airport it was a good two hours past our scheduled arrival and it was close to 10 p.m. Walking through the airport, the only thing open was McDonalds! My husband went to gather the luggage, since we needed it and wouldn’t be using the Magical Express until the morning so we did not affix the yellow Magical Express tags to our baggage. We would carry our bags to the bus with us in the morning.

I took everyone to find the Hyatt and check in, and it was really easy to find as it’s essentially in the center of the airport if you look up in between the terminals where the big open area is near security to terminal A and B. We had booked two rooms, and unknown to me my husband still had my license from security at the airport so I was unable to check in. My mom luckily could get into her room, so we could at least head towards a room as we were pretty exhausted and my twin infants needed some place to let off some energy after being in and airport and on a plane for the past 5+ hours! To access the Hyatt you take the elevator up from the main airport, and then you need to input your room key to access floor higher than the lobby so I had to go back and wait for my husband so I could check in. Overall, our plan to divide and conquer did not work as he wouldn’t have made it to the room without the room key had I been able to check in! 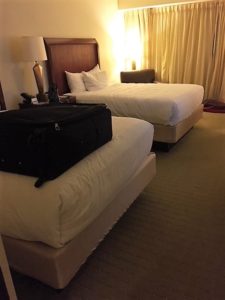 Once we were settled we did have to call for another crib, as we have found when traveling with twin infants many places do not understand the request for two cribs. When making the reservation we put one infant in each room and requested a crib in each room. However, we only one room had a crib. We ended up having this same problem at Disney. The hotel was kind enough to provide sound machines in the room though to help with the noise level, even though we did not find the rooms noisy. Our room did not overlook the runway (those cost extra), it had a balcony that overlooked the center of the airport.

By the time everything settled down it was after 11 p.m., we were thankful to have the hotel room so everyone could turn down for the night. Had we headed down to the Magical Express we probably wouldn’t of been at our hotel yet, and by the time we got settled it would have been after midnight before we turned in. Some can argue or ask why we didn’t book a room at a Disney hotel and while I can see pros and cons to being on property already, when traveling with two infants it’s all about the convenience and ease factors. We go with what is easiest and makes most sense to us at the time. What was supposed to be an evening of relaxation before our week-long vacation at Walt Disney World turned into a delayed start with some rest. 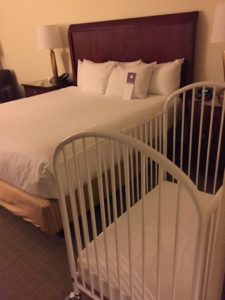 Everyone was eager to get up the next morning and head to the Magical Express. My mom headed into the airport and found Dunkin’ Donuts to have a little breakfast. I had found the earliest flight coming in to Orlando, which happened to be from New York to provide our flight information to the Magical Express. It was slow when we got down there around 9 am, but they didn’t wait a while for the bus to fill up. We had done online check in and were hoping our room might be ready, but it wasn’t. We enjoyed a nice day at Disney Springs and hung out at the hotel until the room was ready.

The Hyatt was exactly what we needed. The rooms were clean and convenient. We had two connecting rooms, with balconies that overlooked the airport lobby. You can pay extra to have a runway view, but we did not need that. The Staff was attentive and responsive to bringing the additional crib along with a sound machine when I called. One room had two queen beds and one room had one king bed. There was plenty of room in the room with one king bed as it’s 360 square feet to fit two cribs, one of each side of the bed. 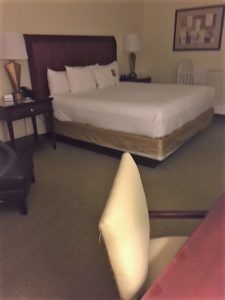 The hotel also has an outdoor pool on the rooftop, I actually wish we had extra time to enjoy that (had we gotten in earlier we might of!) They Hyatt also rents out rooms for Day Use, which could be very useful if you have come back from your cruise and have a late night flight as you can use the hotel and it’s amenities instead of just sitting in the airport which is great to occupy children!

DIVA TIP: I packed a separate area of my suitcase for this one night. I packed a set of pajamas for each child, along with a set of clothes for the next day and toiletries in one area of a specific suitcase. We only needed to open that one suitcase with everything we needed for the overnight stay. 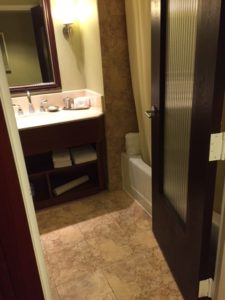 Overall, when you add a night to your Disney vacation you do have options. We are Disney Vacation Club members who visit on points so we simply could not just add one more night on our reservation. There are other times, when a room may not be available at your Disney resort. We chose the Hyatt at the Orlando International Airport and would do it again. The Hyatt also has a great program with Cruise lines should you want to arrive a day early to avoid traveling in to morning of your cruise. 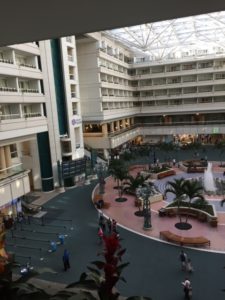