Review: “Beauty and the Beast” Event in a REAL Castle, Canada 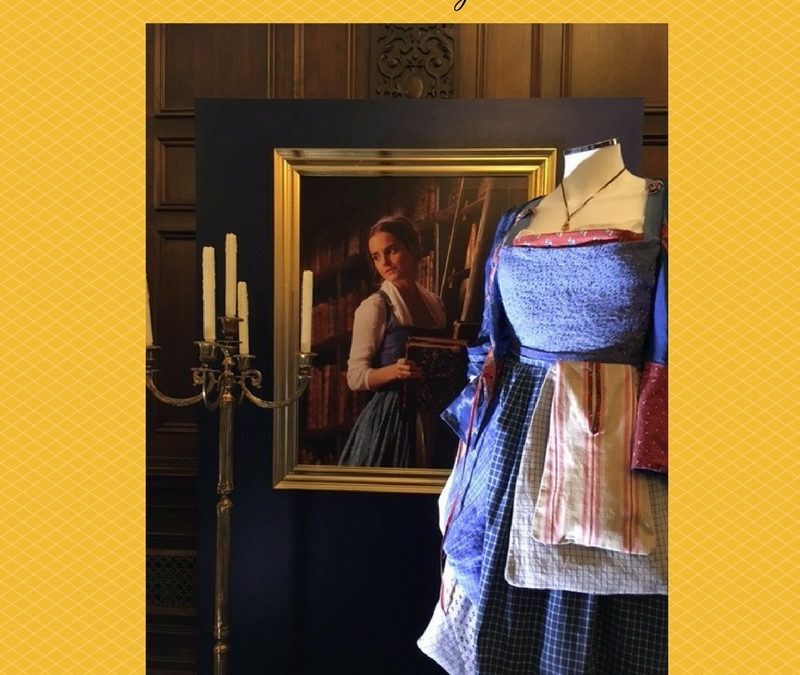 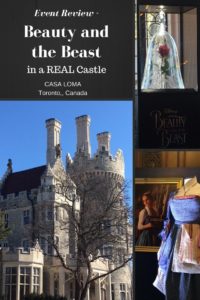 Beauty and the Beast Event in CASA LOMA – Toronto, Canada

Disclaimer: I won tickets for a family of four from Walt Disney Studios Canada through their FACEBOOK contest. This event was held in Toronto, Canada during the Family Day long weekend, February 17 – 18, 2017. I was not asked by them to write about our experience.  All opinions expressed are my own. All photos are my own as well.

On an unusually warm winter, long weekend holiday in February, It seemed like the whole city of Toronto descended upon the Castle on the hill. For in this famous, historic Castle in the middle of town, was the setting to promote a “tale as old as time.” Casa Loma hosted a grand event for everyone to “Be their Guest”, with family activities, shows and costumes from the much anticipated Beauty and the Beast live action film, starring Emma Watson. The Gothic Revival style of  Casa Loma was befitting, for it is a magnificent Castle with an air of mystery as well as beauty. The Castle is an authentic castle (not a folly) built, starting from 1911 for Sir Henry Mill Pellatt. To learn more of the history of Casa Loma and all of their current events, please see their website here.

Prior to this February long weekend, the Walt Disney Company teased Canadians, on Social Media; with a photo of a single red rose in front of the Iconic Heritage Building. All of  the Disney Fans in the nation went into a frenzy trying to guess what we would be bestowed with, upon this North of the American border province. There really must be more “than this provincial life” as we were figuring out what will happen. Finally the big reveal: a fun event for everyone who is a fan of the World’s most famous bookworm Princess.

The event was magical. And many people noted that it felt a bit like having Disney World in our own country (including the crowds and stroller parking!) As we entered the Castle, the glorious music from the movie greeted everyone. The Great Hall welcomed people to an incredible Aerial Show (which got a bit congested at times). The Oak Room put on a Ballroom dance, keeping in the spirit of Belle and the Beast’s FAMOUS waltz, Lovely costumes were on display in both the Library and Conservatory (my favorite part of the Castle). In the “swimming pool” area (if you read the history of Casa Loma, this part was never completed), was transformed into a Theater where guests were treated to a behind the scenes look at the much anticipated Beauty and the Beast live action movie. There was storytelling in the Austin Room  on the third floor. And if you have ever ventured through the tunnel, well, it used to be quite a scary adventure, as the tunnel was dark, dingy and guests had no idea what would turn up at the other end. However Casa Loma, Walt Disney Studios Canada and the Liberty Group, turned this tunnel from mysterious to ENCHANTED with views and scenes from the movie itself. This Enchanted Tunnel led to the Carriage Room and Horse Stalls which was converted  into an Arts and Crafts room with Face Painting and had a Bouncy Castle too. How fun for all the children attending this event! 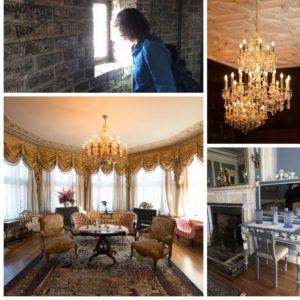 Guests of the Event were also able to tour whole the Castle!

Outside of the Castle was a nice reprieve from the crowds. The sunny weather was beautiful for sitting outside and enjoying treats like hot cocoa and s’mores (which my daughter loved) – although the prices were similar to buying food and drinks in the Walt Disney Theme Parks, yikes! There were beautiful wood carvings everywhere as well as a gentleman displaying his wood carving skills which was fascinating to watch. I also thought it was adorable to see so many little Princesses, dressed in yellow gowns as Belle. 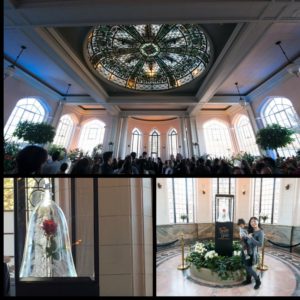 “The Rose” on display in the Conservatory of CASA LOMA, Toronto, Canada

The most exciting part of the event for me was to see the famous “Rose” on display in the beautiful Conservatory. There was a queue for the display and visitors awed it as if it were the most exquisite rare diamond in a museum. There were also Cast Members dressed up as people who may have lived in Belle’s provincial town, and visitors were able to take “Character Photos” with them. The Costumes were divine. The most popular costume from the film was Belle’s “town dress” in blue which Emma Watson sings, “Bonjour” complete with the tea towel she places a loaf of bread in. I would have loved to have seen Belle’s famous yellow gown but unfortunately the iconic dress was not included for this particular exhibit.

Overall it was exciting  to have a bit of Disney up here in Canada as we join the whole world in anticipation for Beauty and the Beast film. Thank you Casa Loma, Walt Disney Studios Canada and the Liberty Group for bringing a bit of Disney Magic to Canadian fans. 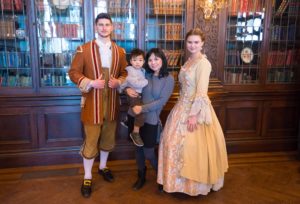 Canadian Diva and her toddler taking a photo with “Characters”.

Beauty and the Beast starring Emma Watson, will be released in theaters on March 17, 2017. Are you looking forward to seeing this movie come to life? 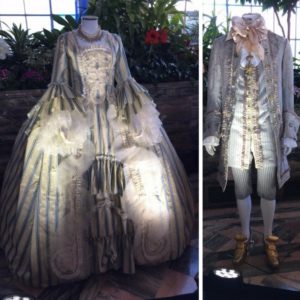 Beauty and the Beast Costumes on Display 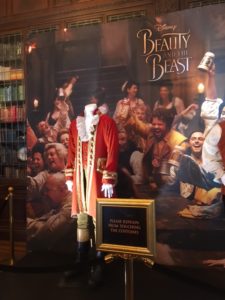 Will you be vacationing in Walt Disney World and want to experience all things related to Princess Belle? Check out our reviews:

Travel Agent, Patricia Payne with All for Dreams Travel can plan a PERFECT vacation at Walt Disney World for you. Ask for a free quote! and find out how you can benefit from using her as your agent here.

Want your princess to dress as Princess Belle or any of the other Disney Princesses? Mom Approved Costumes are a great way to have your Princess and Prince dress as their favorite Disney Characters. She makes beautiful yet comfortable and washable costumes which will definitely be a delight to have while visiting Walt Disney World or Disneyland. Use our discount code: DISDIVA

All for Dreams Travel is an independent agency with Gateway to Magic Travel, an Authorized Disney Vacation Planner.