Review of Aladdin the Musical on Broadway

You never saw a show like Aladdin on Broadway! One of your favorite Disney films come to life right before your eyes when you see
Aladdin, Broadway’s new musical comedy at the New Amsterdam Theatre in New York City! Entering the beautiful theatre is an experience in itself. Carts filled with souvenirs are placed all around the room giving you the feeling that you are in Agrabah. Every time I go to see a Broadway show I buy a magnet to remember the show and the great time I had. Shirts, magnets, bags, bracelets, even the Cd of the original Broadway cast recording are available for purchase.  After being escorted to your seats by the friendly ushers, you receive a Playbill and an “Enjoy the show!” 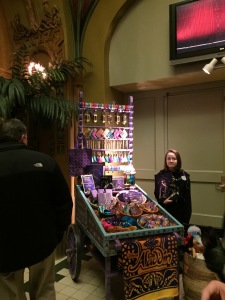 The lights dim and you settle in to get ready to take a carpet ride with Aladdin, his friends and of course our favorite, the Genie.  The Genie is played by the Tony Award Winner James Monroe Ingelhart who truly captures the essence of the animated Genie that we all know and love voiced by the incomparable Robin Williams. The overture starts to play and you are surrounded by the sounds of Arabian influences and the familiar Aladdin classics such as “One Jump Ahead”, “A Whole New World” and “Friend Like Me”.  You are greeted by the Genie as he tells you a tale about a far away place. The cast soon joins in and sings Arabian Nights. As the play goes on we meet Jasmine who is played by Courtney Reed and Jafar who is played by Jonathan Freeman. Fun Fact: Jonathan Freeman is the same person who voiced Jafar in the 1992 movie! To see and hear him on stage in front of your eyes is amazing, it was like jumping into your television. Aladdin is played by Adam Jacobs who is perfect for this role. Colors of purple, gold, blue, red and orange fill the stage as the chorus sing harmonies that will make everyone smile. Disney magic fills the theatre and you are put right 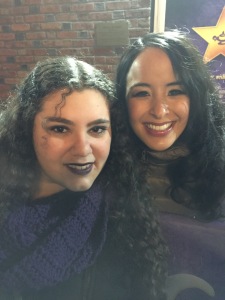 in the middle of the romance, comedy, and Aladdin wouldn’t be, well, Aladdin if there wasn’t a little bit of mischief. This musical introduces us to new friends such as Aladdin’s buddies, Babkak, Omar, and Kassim. This musical also introduces us to new songs such as “Proud Of Your Boy”, sung by Aladdin and the hilarious song, “High Adventure” sung by Aladdin’s buddies. All of these songs, new and old, were written by the brilliant Alan Menken.

This show is definitely on my must-see list and is on my top three favorite Broadway musical list. I would recommend Aladdin the musical to anyone who loves Broadway, Disney, or is just looking for a great night out. This is a fun show for people of all ages. So, let your imagination hop aboard the magic carpet and allow the cast and the magic of Aladdin the Musical transport you to a world where a street rat can be a prince and anything is possible 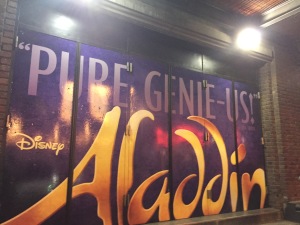 Tip: If you would like to buy tickets for this magical musical try to get them as soon as possible. Much like the restaurants in Disney, this show gets sold out very quickly.

This article is in memory of Robin Williams, “Genie, you’re free!”