Riding the Rails at Disneyland 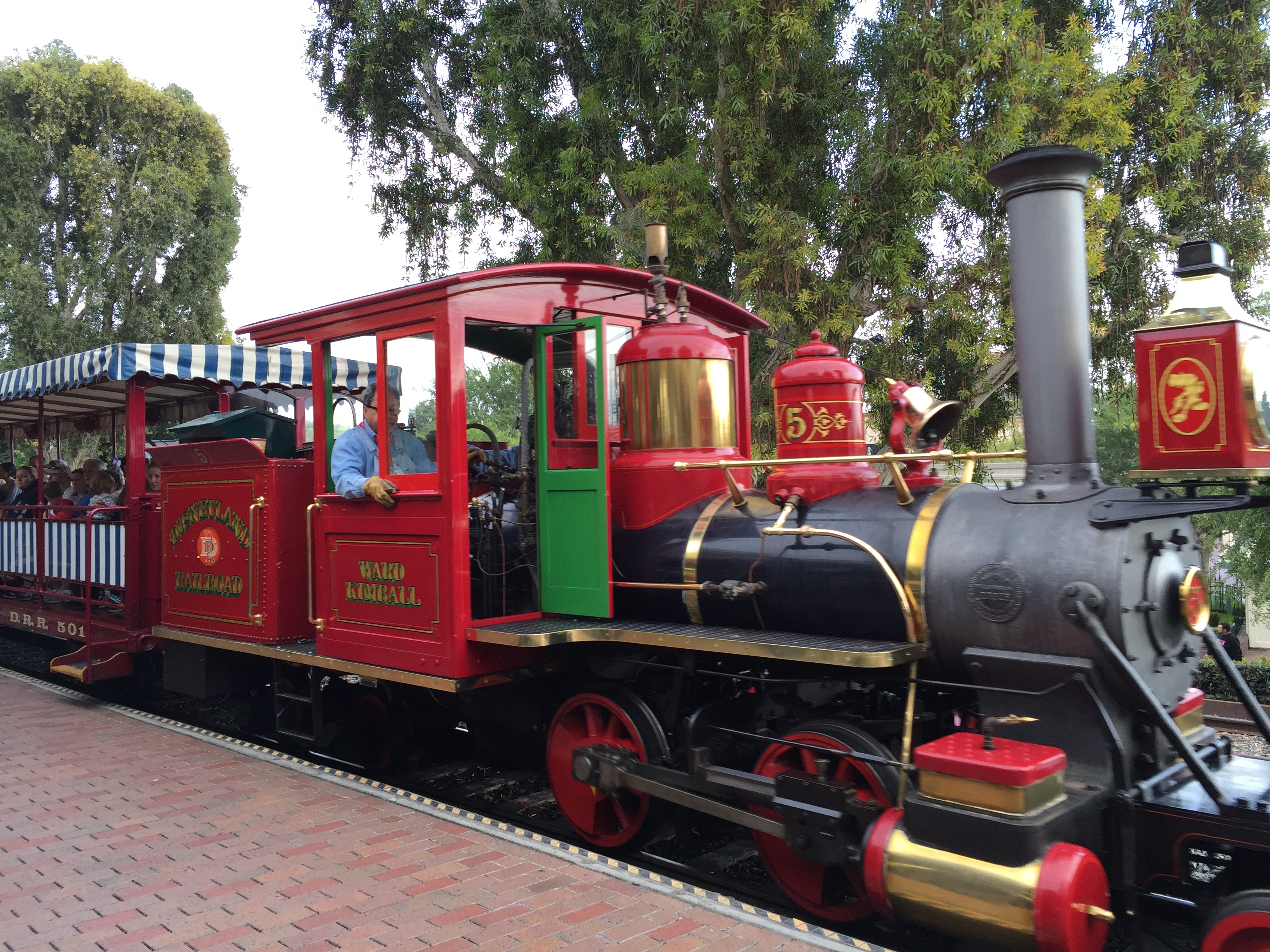 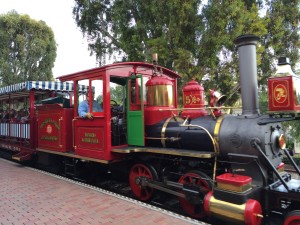 Whether it’s to get off of your feet, take a break from the heat, or change pace for a while – you’re Disney trip just isn’t complete until you’ve hopped aboard the Disneyland Railroad. Sure it can be relaxing to sit on this moving bench for a bit, but with such a rich and interesting history waiting at every stop, the now 60 year old track can take you back to prehistoric times and into the future as if you were riding the rails with Walt himself! 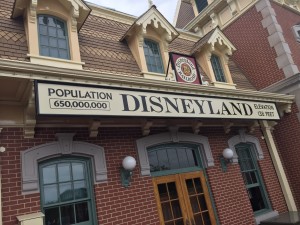 Walt was always a lover of trains ever since he was young, and would wave to his Uncle (a Kansas City Line engineer) as the trains whistled by while he played outside with his two brothers. Disneyland was always imagined to have a railroad system going through the park, being one of the first things to be built on property leaning on Walt’s idea that “….it will all be surrounded by a train.” . And when it was time to start the job, Walt knew just who he wanted to help: Roger Broggie ( 1st Imagineer and  creator of the Lilly Belle). This man was head of the team otherwise known as “Broggie Iron Works ” which was responsible for railroad construction. 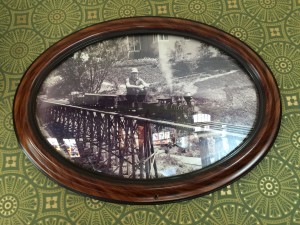 There were two locomotives on the original Santa Fe and Disneyland Railroad (as it was known until 1974): Retlaw 1 and Retlaw 2 (think Walter backwards). Now there are 5 operating trains in the park. 4 were named after famous train historians (Ernest. S. Marsh / E. P. Ripley / C.K. Holliday /and  Fred Hurley) while the last 1 was named for Walt’s long time friend, employee, and train enthusiast (Ward Kimball). All the locomotives are steam operated  and run on repurposed water and cooking oil from throughout the park, just another way Disney recycles it’s materials! In easy terms, the engine basically contains a fire (near the bottom) with a boiler on top. The trains need to make a few rounds around the park to build up enough pressure in the boiler  to regularly operate and be maintained throughout the day by the engineers and firemen, with the water getting topped off at the New Orleans Square station. It’s been said that the trains go through 120-150 gallons of water an hour and make 50-60 stops throughout the park in an 8 hour shift (each round trip – 4 stops – takes about 20 minutes). 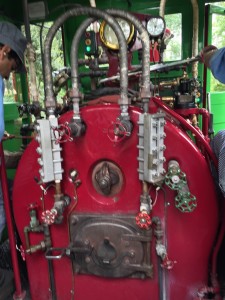 But do you know who runs the trains? It takes a crew of at least 4 people to load and operate each train. 2 are Conductors, you’ll recognize them in their navy suits and stylish caps (similar caps fitted with Mickey ears are available at hat locations in both Disneyland and California Adventure). The Conductors are responsible for the safety of everyone on the trains. They load and unload guests, provide safety instructions, and answer any questions. Plus they get to say ” All aboard!”, which in my opinion might just be the best perk of all! The train is not allowed to leave the stations without permission from the Conductor. The other 2 members of the crew operate the engine: the Fireman and Engineer. The head honcho, a.k.a the Engineer, moves the trains forward and backward, etc. You don’t need a license to be an Engineer on the Disneyland Railroad, but you do go through some special training. They start by taking 5 weeks of classes (1 week in a classroom), then take a test which if passed, provides them with a learner’s permit of sorts. After about a year or training and working with that, they take another test and are then certified as an Engineer.  Engineer and Cast Member Scott from Detroit mentions that running a steam locomotive has its own charm and remains special to him. The Fireman also receives some training and works with the Engineer at the front of the engine. He / She is responsible for balancing the pressure while the train is operating. They keep everything in working order, while the Engineer moves the train from station to station. Not only are these 2 jobs important, their outfits aren’t that bad either! Fitted into striped overalls, safety gloves, and official looking caps these pros scream safety and style here at the Disneyland Railroad. Now Walt Disney was no stranger to the parks trains either as you know. He frequently rode them before the park had even opened and  when guests filled the cab cars, many Cast Members would often see him strapped in his very own bib overalls as an anonymous engineer himself! 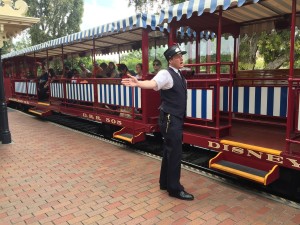 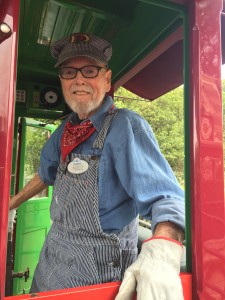 There are a couple special ways that guests can experience the Disneyland Railroad, besides riding the rails. One is riding the tender, or sitting up front for a roundtrip tour of the Magic Kingdom through the Engineer’s eyes. That’s right, this uncommon guest experience (for 1 or 2) gives you a literal front row seat to how the engine of the train works from those who actually work it! Simply ask a Cast Member, or Conductor, to “ride the tender” and they will see if that option is available to you at the time. Try asking at Main Street Station first, that way you start and end your trip in the front of the park. Usually 1 of the 5 trains has a seat for guests on the engine so you may have to wait about 20-30 minutes for this opportunity to present itself, but if that seat comes up – take it! After the Cast Member has checked that you and your party are wearing closed toed shoes (slip-ons are acceptable in some cases) you are directed to the tender box on the engine where there is a small bench seat behind where the Engineer and Fireman are sitting. Take a seat, buckle your seat belt, and off you go around the Happiest Place on Earth! Feel free to ask any questions and take as many pictures as you like – this is a one of a kind experience! This is a very good ride along for train enthusiasts of all ages – you get to see the inner workings of a train engine at work and meet the team that does it every day, Disney style! Whether you know all about trains or this is your first time riding one you are guaranteed to have a special time! Another exclusive experience on Disney Trains is riding the Lilly Belle, a separate car named after Lillian Disney. This is a historic train ride that take you into the eyes of Walt and Lillian Disney as they would have shown off the park to esteemed guests. There is much to learn about riding the Lilly Belle, so keep an eye out for another article written specifically about this experience! 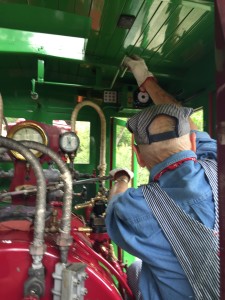 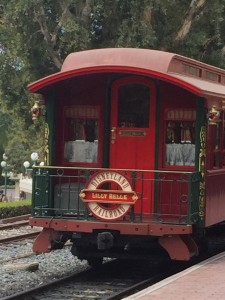 These special trips on the train are noteworthy, but a simple round through Disney’s Magic Kingdom on a bench in a cab car can be just as fulfilling. Imagine starting off on Main Street USA, designed after Walt’s Missouri hometown, and on through his world of imagination and adventure on his favorite form of transportation. All aboard and off you go! – onto the outskirts of Adventureland keeping an ear out for “Lions, Tigers, and even Tiki Birds!” while taking in the exotic foliage. 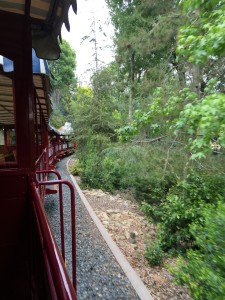 As you pull into the next stop Mardis Gras becomes the theme when you see decorations and hear live Jazz Bands playing at restaurants in the distance. You finally pull up to New Orleans Square Train Station. A telegraph spits out an inspiring message in Morse code as you wait for the train to fill  up with fuel and passengers. That message is actually parts of Walt Disney’s opening day speech given at the park July 17, 1955. “To all who come to this happy place, welcome.” 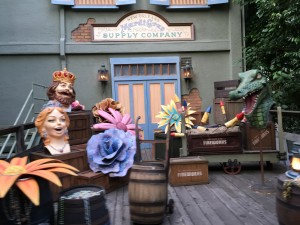 The train whistles twice, indicating that it is moving forward, and we travel into Splash Mountain, where “Every day is a Zip-A-Dee-Doo-Da Day and if you look hard enough you might just find your laughing place!” Outside of Critter Country you go and onto the front of the Rivers of America filled with rich nature and wildlife. The Indian Chief waves us on with a friendly hand and before you know it we have arrived at Toon Town Depot: official entrance to the houses of Mickey and his friends. 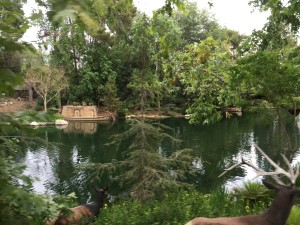 You pass through Small World – make sure to wave at guests starting their Happiest Cruise Round the World, and off we go into Tomorrowland where the “first daily operating monorail in the Western hemisphere” debuted in 1959. Be sure to look to the left and you will see a glimpse of the roundhouse, where the trains are stored on the bottom and monorail stored on top overnight. Cruising next to you are the drivers on Autopia “where anyone can get behind the wheel of a vehicle – and no license is required!” 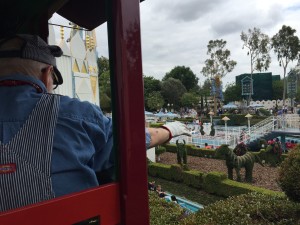 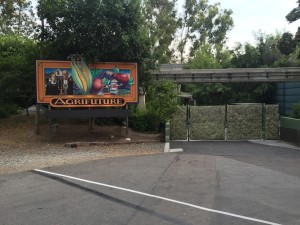 The train takes on some new passengers, and soon you travel into the Grand Canyon as “we know it today” (be sure to keep a lookout for a Hidden Mickey in the clouds!) and back in time to the Primeval World of Dinosaurs. This edition of the Railroad was adapted from a presentation Walt gave at the 1964 World’s Fair. Be careful as you watch, you will see things from baby Pterodactyls to a giant T-Rex looking for his next meal! Soon we steam back into our own time and pull into the Main Street station for a final stop. 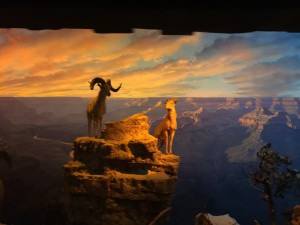 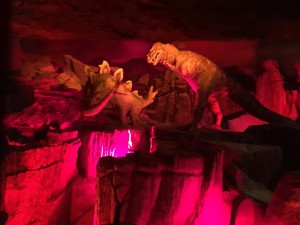 And there you have it; you went on wild adventures, saw nature at its finest, even found your laughing place, went forward into the future and then all the way back to prehistoric times, all while sitting in one of the most original and historic pieces of Disneyland – the Disneyland Railroad and its’ Trains. Cast Member and Conductor Bob from Whittier likes the fact the people can be so connected to the history of the parks and says the trains are great for kids. They can’t be turned away because they are too short and seeing their eyes light up at every station brings out special positive and magical moments to be shared. 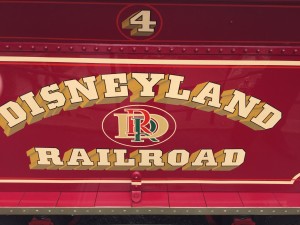 So if you just want to take a load off from the heat or you are ready to take a ride into the history of the park, the trains of the Disneyland Railroad provide comfort and thrill for any age. A fulfilling and memorable experience is only a train ride away!