Everything You Need to Know about Disney World’s Rivers of Light at Animal Kingdom: It’s Finally Here! 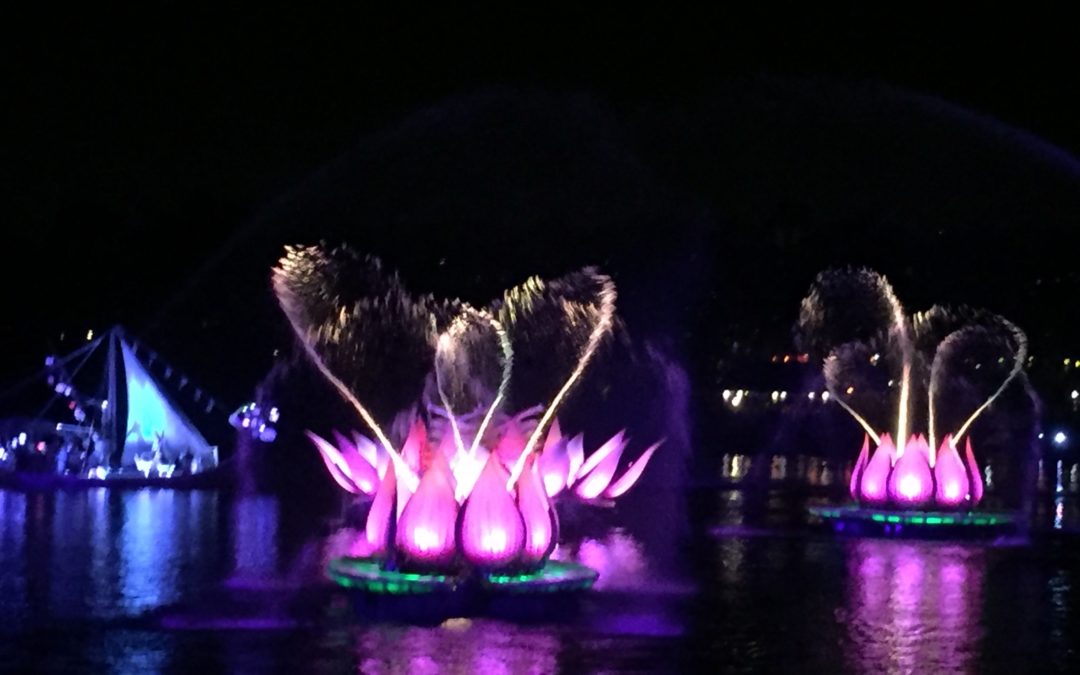 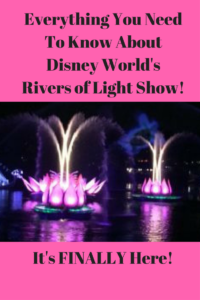 If you are like me, you have been waiting (not so) patiently for Animal Kingdom to debut its new nighttime show.  Disney’s Rivers of Light officially opens Friday, February 17th.  When it was decided to do a soft opening the weekend before, I jumped on the chance to be one of the first to see it.  FastPasses were available starting at 9am day of and I was able to snag a pass for Sunday evening. 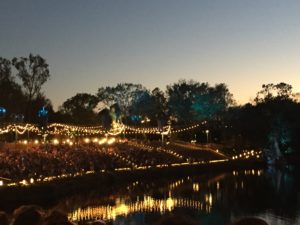 There are two of these sections in the theater

After waiting all day, my 6 year-old daughter and I headed to Animal Kingdom to see Rivers of Light.  We made our way to the theater located across from Everest and took our seats.  We arrived about 30 minutes before the show and still had good seats.  However, the seats themselves are not good.  It was probably the worst thing about the night.  They are long benches (like Fantasmic) divided into two major sections.  They are very hard and uncomfortably close together.  You will at some point touch the person both in front and behind you. 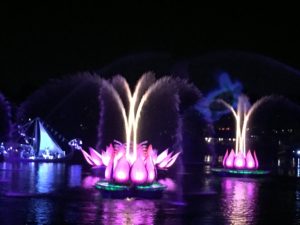 Can you find the turtle in the water behind the fountains?

As night began to fall the theater came alive.  Fireflies started twinkling.  You could see animal shadows walking through the trees.  Birds would call to one another.  The trees around the river would slowly change colors.  A few minutes before the show starts four large lily pads, with flowers, float into the lagoon.

At promptly 7:15 the lights dim and the lagoon comes alive.  Two ships slowly float past-one blue for water and one red for fire.  The “storytellers” use dance, music and shadows to showcase the animals and Earth.  (I’m sure they had some really wise words here, but I was too busy looking at everything and being in the moment that I can’t remember.) 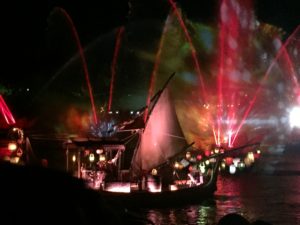 One of the boats from River of Lights

Along with the boats and lily pads, the water rises.  Much like Fantasmic with the video on the water.  It starts with water and fire (past) and into beautiful images of animals (present and future).  The music follows the show which ebbs and flows throughout its fifteen minutes.  The images that are projected have come from never-before seen footage of Disneynature. 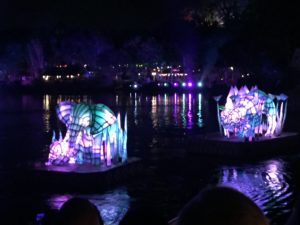 Four animal floats appear-tiger, elephant, turtle and owl.  They change color as they drift around the lagoon.  The colors on these are amazing.  These floats come out in the beginning and then again at the finale.

A fifth lily pad emerges and is much larger than the other four.  The lily flowers open up and become fountains.  The fountain work between the lily pads is very impressive.  They were coordinated well together and danced along to the music. 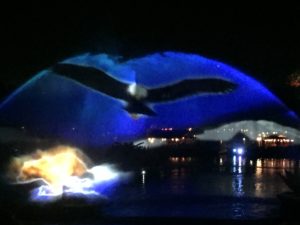 Eagle on the water. The blurry light is a bear from a lily pad 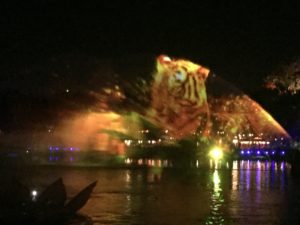 Tiger on the water.

Besides just being fountains, the lily flowers also had images projected on their small arcs.  Since the lily pads move, this gave a neat illusion in front of the big water arc.  There are great moments where the animals look like they are walking on water.

Keeping with the fire and water theme, the center of the large lily rises into a tower of fire.  The conclusion is a combination of the fire, water and light. 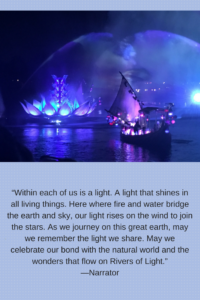 A few things to add:

When I asked my daughter what she thought of the show she said it was “lovely-cool!”  I thought this was a great way to describe it.  If you get the chance to see it, I highly suggest it.  It does need to be dark for the show to be at it’s best, so keep and eye on when it starts pending what time of the year you go.

Ready to book your next vacation and experience Rivers of Light for yourself?  Contact our FREE Disney Diva Travel Agent Patricia at All for Dreams Travel. Best wishes!