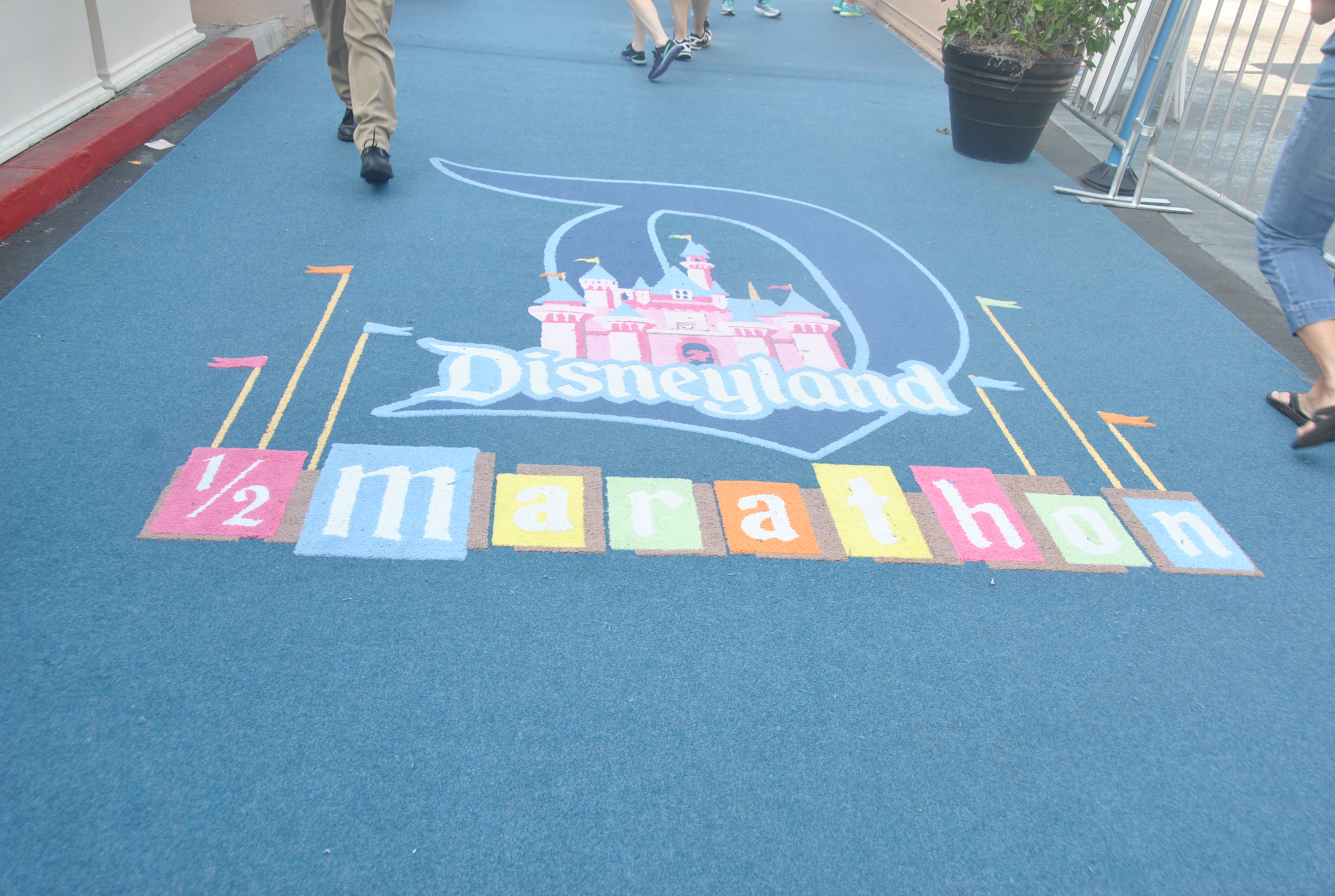 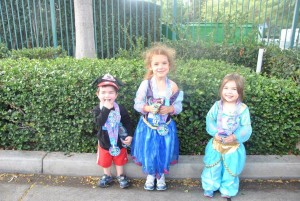 Like most parents, I love my kids and want them to experience life to the fullest. In fact, I’d much rather my children have experiences instead of presents. So when I began debating whether or not I should participate in the runDisney Disneyland 10K, I knew more than anything that I wanted my children to participate.

Disney Diva Tip: runDisney events sell out ridiculously fast. All of the kids’ races (and several of the adult ones) were gone within the first hour. So make sure you sign up for the reminder emails, and then come registration day, make sure you (and possibly even multiple people) are trying to sign up your party as soon as registration opens. And in case you have multiple children and want to know how to prioritize your registration, for the kids’ races, the Diaper Dash sold out first, followed by the 100m (1-3 year olds), then the 200m (4-6 year olds), and lastly the 400m (for the 7-9 year olds). If they do sell out, you can always try your luck with a charity group. To read more about that, read Military Diva’s article here.

If you are lucky to snag one of these coveted race spots, you don’t have much to worry about until a couple of weeks before the race. That’s when you will receive an email with general runDisney tips, as well as a link to print off your running waiver. Disney Diva Tip: If you don’t print off your waiver, there is a station at the Expo where you can do it there, but who wants to wait in line and deal with all of that? It’s just easier to do it ahead of time and print and sign everything in advance. 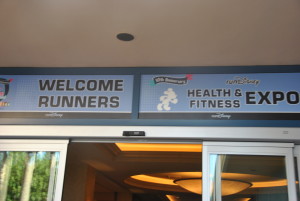 Then it’s time to go to the Expo! The Expo opens the Thursday before the race weekend, and is the place to find all kinds of running gear, free samples, and of course pick up your race packets). Once you arrive at the Expo, there are banners labeled by which event (Kids’ Races, the 5k, 10k, and so on). From there, the lines break down by what your bib number is (which you can find either by doing a search on the runDisney website or by looking on your waiver).

Disney Diva Tip: runDisney is really cracking down on registration. Whichever parent is listed as the emergency contact and person who signed up your child is the only one who can pick up your child’s race packet. So make sure whomever you send to pick up the packet is listed with your child’s information.

As for what is included in your child’s race packet, ours included their t-shirts, Clif energy bars, safety pins, and their bib numbers. Disney Diva Tip: If you need to exchange your child’s t-shirt size, they ask that you do so after the race (not before). And just as a warning, the Expo will be gone by Sunday, so if you do need to exchange your child’s shirt, please make sure you do so right after your race (or sometime on Saturday). Otherwise you may be out of luck. 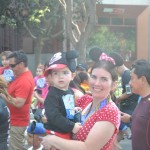 On race day, your child has the option of wearing their runDisney t-shirt from their race packet, or you can have them wear another outfit or even dress in costume. I dressed my son as Mickey Mouse in a do-it-yourself costume I threw together (a Mickey Mouse ears hat from Party City, a plain black t-shirt from Walmart, and red swimming shorts I found on clearance at Target). For my daughter, I knew she wanted to be a princess, but received several questions of “Aren’t you worried about her running and tripping?” Well thankfully, my daughter has several Mom Approved Costumes (which are not only machine-washable, but lightweight and not scratchy). I chose three: her Cinderella day dress, her Belle day dress, and her Jasmine-inspired outfit and told my daughter to pick from those. She chose to run as Jasmine, which worked out well, and she had a great time (and no worries about falls).

Now if you’re running the 10K (or another race that same day), your little ones may not have the luxury of sleeping in as late as they usually do. (My poor kids were up at 3am, and my poor 2 year old was falling asleep in the stalls.) If there’s any way that they can sleep in a stroller or the car with someone watching them while you do your race that would be ideal. Otherwise, plan on napping afterwards. If your kids woke up earlier than their usual time, I would definitely not plan on going to the parks afterwards unless you took a nap first. Everyone will be tired, cranky, and will most likely fall asleep in their strollers or throw tantrums, which can quickly make The Happiest Place on Earth seem like a nightmare. Disney Diva Tip: If you want to walk around Downtown Disney, have your child get a makeover at Anna & Elsa’s Boutique or snag a character meal at one of the Disney Hotels, this is a great day to do it… you still get the added Disney experience without losing time at one of the parks. 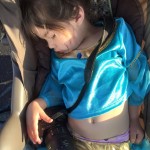 About 30 minutes before the children’s races begins, you will start lining up in your corrals. There really isn’t a lot of shade here, and depending on which race you are participating in, your child (and you if you or someone in your party decides to go with them), can be standing around for quite awhile, so you may want to bring a fan, bottled water, or something to keep yourselves entertained (the Pack&Go activity booklets or even having your child play Simon Says, do jumping jacks or other exercises, and even just stretching. The key is to keep them occupied!) Also, while there are tv screens displaying what’s going on near the starting line, most people (especially children) will have a hard time seeing and hearing what’s going on.

Another downside is that the races aren’t really staggered… they just move onto the next one as soon as the previous one finishes. Personally, I wish they started with the 100m at 9am, followed by the 200m at 9:30, the 400m at 10, and the Diaper Dash at 10:30, and have kids line up 30 minutes before rather than having everyone arrive by 8:30am. To me, that would alleviate a lot of the waiting, and would also allow parents more time to switch from running with one child to the next (or at least allow you more time to find a spot to view them).

The line moves reasonably quickly considering the number of participants, but can still take awhile to get through, with about 8-16 kids running at a time. The race itself goes fairly quickly, and there are lots of photographers from Marathon Foto to take pictures.

The Marathon Foto Photographers seemed to take a lot more photos of the kids’ races than the other runDisney events, but with limited viewing areas and the possibility that you might be running with your child, it is reassuring to know that someone else is catching the magic and experience for you. 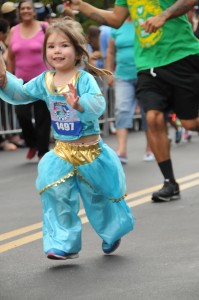 Disney Diva Tip: While my daughter and mom (who ran together in the 200m race) seemed to get several pictures, I don’t feel I got as many when my son and I did the 100m race dash. I think that is mainly because my daughter was so charismatic and smiling and waving to everyone, and Little Man was more bashful and just focused on his run. There were times I would see photographers focusing on him (particularly when he was close to Cruella De Vil) who were posed ready to take the pictures, but never actually pushed the button (much to my annoyance). And I’m kind of kicking myself now for not having my son run over and high five Cruella (who was holding her hand out to the kids, but Little Man was more interested in finishing the race). That would’ve been such a great picture to have and such a magical memory and I’m sure the photographers would’ve been all over it. So don’t be afraid to stop and run over to get those once in a lifetime moments captured on camera.

After you cross the finish line, you go slightly further to where some of the VoluntEARS are passing out the medals to each of the kids. It doesn’t matter which kids’ race your child participates in… whether it’s the Diaper Dash, the 400m, or somewhere in between, the kids’ medals are all the same. Unlike the 10K, ½ Marathon, or challenge medals, the kids’ medals are made of colored plastic, similar to the 5k medals. This year’s Disneyland ½ Marathon had a Villains theme, and so the kids’ medals had a picture of Sleeping Beauty castle, along with Maleficient as a dragon, and Flora, Fauna, and Merryweather. Personally, I would’ve preferred if it had four or five villains to fit the theme better, but I suppose they wanted to make more of a Disneyland reference and give a tribute to its iconic Sleeping Beauty theme. 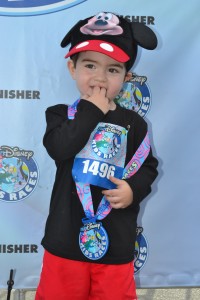 From there, you go to the area where you can pick up your child (or if you were with them, escort them out). Now you can’t simply take your child and walk off and leave. There are voluntEARS with clipboards waiting to verify who you are and have you sign for your child. To get out of the running area with your child, you need to have a strip from their bib with their bib number attached. DO NOT LEAVE THIS ATTACHED TO YOUR CHILD’S BIB! If you want to run with them, you can carry this strip with you. Or if you want to leave it with another person in your party, they can show it to a voluntEAR and have permission to go back and pick up your child.

Once you have made it through the security checkpoint, you are treated to an area for more photo opportunities, as well as bottled water, powerade, and TONS of bananas. Nothing ends a race quite like a refreshing, healthy snack, especially after a busy morning! 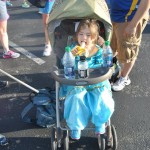 Disney Diva Tip: Of course, if you are meeting other people, it is always highly recommended that you have a designated meeting area. Whether it is the giant sponsor balloon, near the stage, or even by a location in Downtown Disney like Earl of Sandwich, Rainforest Cafe, or the ESPN Zone, you want to make sure you can be reunited with your group quickly. This is also a great time to stop and have a meal to celebrate all of your child’s hard work!