runDisney Marathon Weekend: What We Wish We Had Known 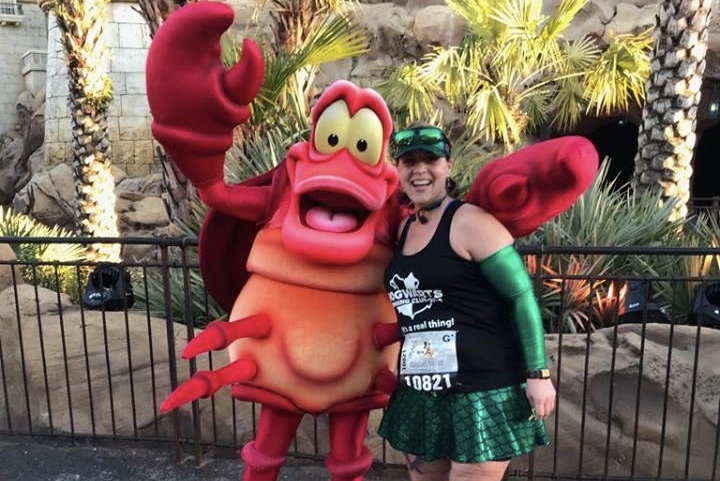 An Interview with Disney Marathoners
(and Goofy and Dopey, too!) 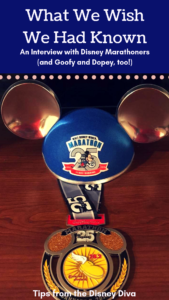 Across the interwebs (or just instagram), runners are gearing up for their first big race of the year— the Disney Marathon! Marathon weekend is January 9-13, 2019, and you can be sure the parks will be packed with accomplished runners wearing jingling and jangling medals on every ride. If you’ve got it, flaunt it, right?

As we prepare for this year’s races, or look forward to crossing an item off our bucket lists in 2020 or beyond, I thought it would be fun to check in with those who have gone before us to conquer Disney’s marathon, Goofy, and Dopey challenges.  For those wondering, the marathon is a full 26.2 miles, run on Sunday.  To turn up the heat just a little, Goofy Challengers complete both the half marathon (13.1 miles) and the full marathon (26.2 miles) on two consecutive days– Saturday and Sunday.  For those counting, that’s 39.3 miles.  And, if that isn’t enough mileage for you, Dopey Challengers run all four Marathon weekend races– Thursday’s 5k (3.1 miles), Friday’s 10k (6.2 miles), Saturday’s half marathon (13.1 miles) and, finally, the full marathon (26.2 miles) on Sunday, for a total of 48.6 miles by foot in four consecutive days.  Oh my!  Those who conquer the Dopey fly away with a total of six gorgeous medals.  Registration for these races is not cheap, so runners definitely will want to make the most of their runDisney weekends.  With this in mind, I set out to ask former runDisney participants:

What do you wish you had known going into Marathon weekend? 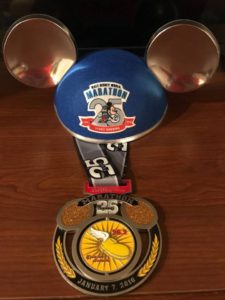 Let me introduce you to my friends, Marathoner Nicole Cooper and Goofy and Dopey Challenger John Senger. Being a super-planner, my first question for Nicole and John had to do with timing.  Tiki Husband and I both run local races, and we even have a couple of run-cations under our belts.  Being a Disney Diva, I have often debated the merits of arriving in Orlando a week prior to a runDisney race, giving us time to explore the parks, or showing up just in time for the expo.

So, what’s the best thing to do?

John:
For both Goofy and Dopey, we arrived at Disney on the first day of the expo. We have a second home in FL near Cocoa Beach, (nice) making it an easy drive over since we’d head there the weekend before the races. If I were flying in, especially from a northern state, I’d aim to get there on Tuesday or Thursday night for Dopey & Goofy respectively. If you plan on a day of expo arrival and your flight is delayed or canceled, your race weekend is not off to a good start. (You’re right– that would not be a good start.) Emergency bib pickup is normally available before each race at 4am, but why chance it? 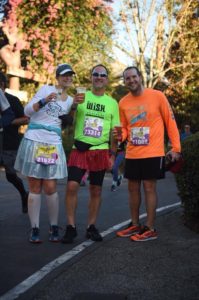 Where did you stay?  On property or off? 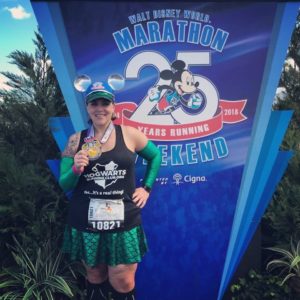 Nicole:
We stayed at an Airbnb that was poorly described/advertised. It didn’t accommodate our needs very well. (My mom ran the half on Saturday; I ran the full on Sunday.) We were supposed to stay with friends in Orlando but that fell through at the last minute. (ouch) We scrambled to make the best of it. Because it was off-site and the fact that the roads surrounding the park shut-down incredibly far ahead of the race, we had to get up and out the door on race day so much earlier than had we stayed on-property. (Tiki Husband and I have encountered this on our few run-cations, too.  The closer you can stay to the parking area for the start line, the better.  One time, we had to leave our hotel a full 3.5 hours before the race began and napped in the parking garage, once we found it.)

John:
We’ve stayed at All Star, Caribbean Beach, Boardwalk, and Beach Club/Yacht Club. We prefer the Epcot resorts because they’re close to our two favorite parks, and because they’re an easy drive to the start on race morning.

I never had a problem with taking the bus from either All Star or Caribbean Beach Resort. Both had plenty of buses going both to and from the race. Lines to get back to All Star were extremely long in 2010, the Disney on Ice year, so I took one to another resort and called my wife to ask her to come and get me. (You could also opt to use an Uber, Lyft, or Minnie Van).

Staying in one of the Epcot resorts makes it easy for friends & family to come and see you during the 10k and the full, for both cheering and handing out booze. (haha Handing out booze.  That’s fantastic.) Yeah, we’ve had beer and mimosa stops several years now.

While Disney is increasingly making it easier to choose to stay off-property by offering extra magic hours and early access to fastpass+ for Good Neighbor Hotels, this may be one Disney trip where it makes perfect sense to go ahead and stay in the Disney bubble.

Nicole:
The expo was great! I was able to pick up a few cool items, including arm warmers that I wore for my race because it ended up being remarkably cold that year– iguanas were falling out of the trees! (Wow! That’s so crazy.) I also got to meet Jeff Galloway, which was a true delight. He’s the reason I’m running today! (This is one hundred percent true.  He’s also the reason I’m running today because Nicole was kind enough to refer me to his interval method.  If you want to run any long distance, but just don’t think you can go that far for that long, check him out.  There’s a whole army of Galloway run/walkers out there! 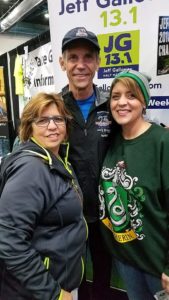 John:
I’ve never had a bad experience at the expo. Probably jinxed myself for 2020 by saying that. (No way.  It will be great!)  I don’t go first thing in the morning. I wait until 1 or 2 in the afternoon. (This is quite the opposite for what we usually recommend for parks and parties, but maybe it works.  By afternoon, most people are probably off riding Space Mountain or cruising down the Nile with a punny skipper.) I don’t buy much or any of the official merchandise, but I like checking out the vendors to stock up on running shoes, fuel, and compression gear. Great deals and sales at the expo on many basics like those.

What was your favorite part of the race?

Nicole:
My favorite part of the race was when the race route took us through the parks. There were lots of characters and cast members to take our pics with our phones for us. That said, I was not mentally prepared for the amount of time we would spend running on long, stretches of fairly blank, bleak roadways. BUT there were so MANY medical and water stops, which I greatly appreciated, as I needed my hamstring stretched at mile 10 and without that, I don’t know if I could have finished the race. That kind of support was very nice. (Thank goodness they were there.  This was Nicole’s first marathon and I’m super proud of her for pushing through and completing it!) 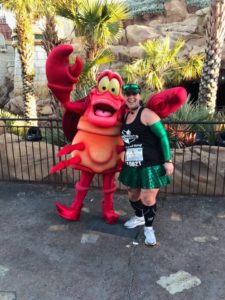 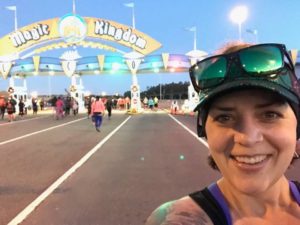 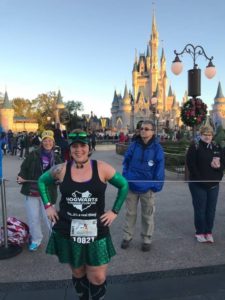 John:
This is a tough one. My absolute favorite part of the full course – running though Epcot in the dark in the first few miles – doesn’t exist anymore.  There was something peaceful and serene about running around World Showcase in the dark with the fire torches lit and the music playing gently in the background. (That sounds amazing. I love the world showcase at night anyway. Running it with the lights and fire and all would be lovely.)

Now, I have several favorite parts of the course. The 10k through the Boardwalk area and Epcot is great, even worth all the parking lot and road running it takes to get there. For the full, I love several parts of it. One, the entrance to Magic Kingdom and the run up Main Street with the castle lit up. Two, the quiet of the miles past the golf course and over to Animal Kingdom. I don’t notice the treatment plant the way others do. Three, the Thirsty River bar in AK near mile 13. They open around 7:30 AM, and we were the first customers two years ago.Three, riding Tower of Terror and Rock n Roller Coaster in Disney’s Hollywood Studios. Not many other races allow you to ride rides. (That’s exactly what I’m most looking forward to when I get to go. Hoping for the 30th anniversary!)  Stopping for beer and margaritas in Epcot. Not many races where you can do that either. 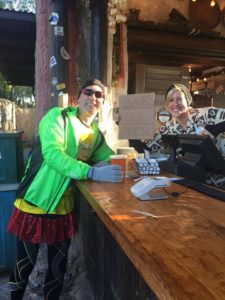 We are Open! Thirsty River Bar

What would you do differently if you ran the Disney marathon again?

Nicole:
Done differently, I’d do it with a friend. Especially if I did the full. I chatted with different folks along the way, but many people were doing the race with friends and/or family and I found myself often wishing for that kind of real-life connection to help me through the mental challenges of doing a 26.2. Furthermore, I’d stay on-site next time. (Yes and yes.  I’d be thrilled to run with you!) 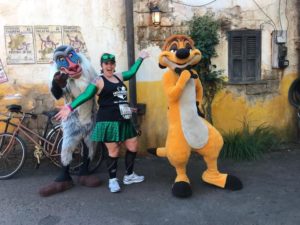 I Just Can’t Wait to be King (er, Queen) 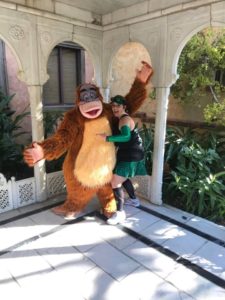 Dance with me, Louie!

John:
I wouldn’t do anything differently. We’ve landed on a good plan which allows us to make the most of the races while having plenty of fun. We take it easy during the 5k and 10k. We race the half. We goof off during the full – running between water stops, stopping for most character photos, hitting several bars, and riding several rides. (Sounds like a blast!) 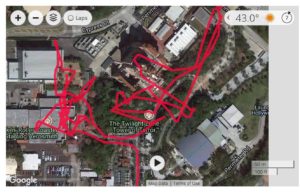 John’s Garmin stats were all over the place as he conquered the rides.

What do you wish you had known before you arrived?

Nicole:
I wish I’d known about the long, out-of-park stretches. I wish I’d known that I was going to have a mile long walk to the start corrals and then an hour long wait for my corral to go. I wish I’d known how bottle-necked some parts of the route would be (single-file!) and folks weren’t always using the best “share-the-course” etiquette. I spent many hours that morning not feeling “the Disney” of it all. Overall though, it was one of the most memorable and rewarding achievements in my running life! 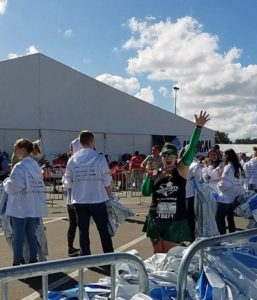 John:
Before my first Goofy in 2010, I wish I had known how much fun it was to goof off and have fun. I tried to balance fun and serious running (it is a marathon after all), and didn’t do well at either. Since then, the half has become our serious race since the course is the same as the full for the first part and pretty boring in total, and we have a blast during the full. 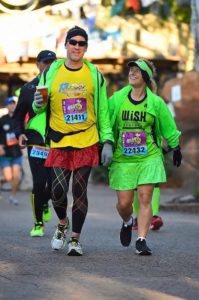 Thank you to Nicole and John for sharing your experiences with me.  As I’m looking ahead, I definitely want to go do these races one year, even moreso now that I’ve had the chance to chat with both of you about your experiences.  All I need is a little faith, trust and pixie dust!

Know before you go:

Ready to book your Walt Disney World runDisney trip? Patricia at All 4 Dream Travel is here to help you! Contact her today.