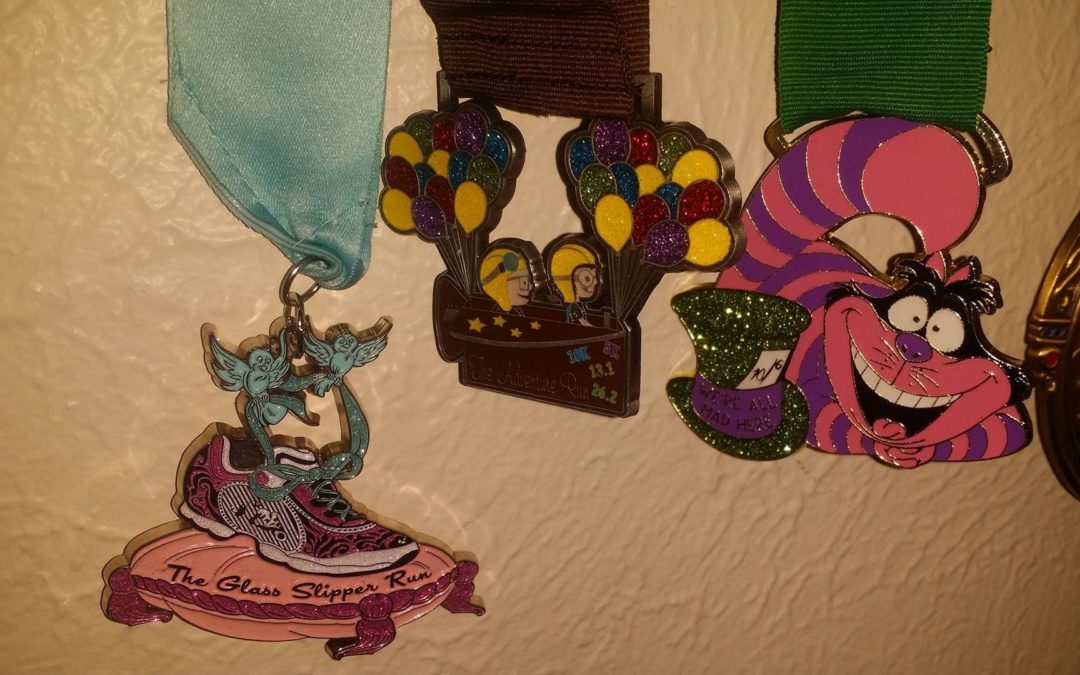 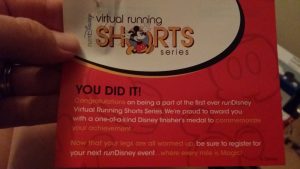 If you’ve read any of my other runDisney posts, you’ll know that my mom’s side of the family is big on running. So I suppose it was only natural that at some point, I’d give it a go. And while I don’t enjoy running very much, I do love Disney, and nothing is a bigger motivation to run than getting to run through a castle. 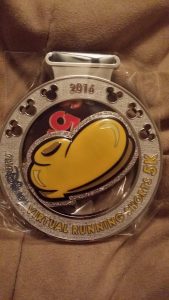 But for those of you who want to participate (without the expense of traveling to one of the Disney theme parks), or if you just want to show your Disney side while training for your next runDisney event, you can always try a virtual race! 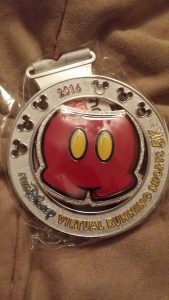 What is a virtual race? Basically you register for the race of your choice online and are sent a bib and medal in exchange for you agreeing to go a certain distance. A virtual race generally runs on the honor system. You usually aren’t required to prove that you actually went completed the race, and like most other races, you have the option of donating to a specific charity or cause, which is a nice benefit knowing that your running, walking, skipping, crawling, limping or however you reach that set distance will be benefiting others. 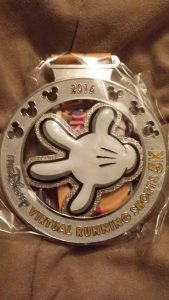 runDisney recently released their own summer Virtual Running Shorts series, which gave you a choice of participating in three 5k’s that were spread out over a couple weeks of each other. You also could participate in a “challenge” and earn a bonus 4th medal if you registered for all three, and who doesn’t love a good challenge (and the extra bling)? 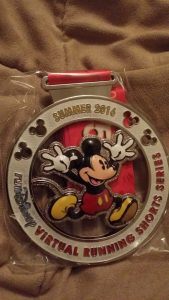 Another perk of participating in a virtual race is that you can set the date, time, and location of when you do it. Feeling sick one day? Good news! You can do it when you’re feeling better. Is the weather super hot or really windy, stormy or snowing? Go a different day, or run indoors! Want to get ready for your next Disney vacation? Why not do it while watching your favorite Disney movie? As long as you are willing to put the time in, virtual races are much more accommodating and flexible than some other races you might participate in. 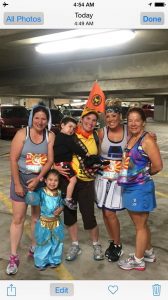 Disney Diva Tip: If you’re training for a runDisney event (or just want to fit on theme), you may want to wear a costume, just to feel like you’re really running at Disneyland or Disney World, but if not, you can wear an old runDisney shirt or even just your favorite workout clothes. The main point is to have fun! 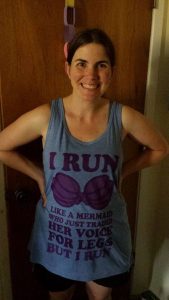 If you are able to convince a friend or family member to sign up with you, I would definitely recommend it. For me, I always run better with “a running buddy”. Not only are they there to encourage you and push you along, but it makes the race go by quicker when you have someone along (plus if there’s an emergency, you also have someone to get help). 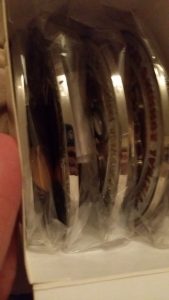 As far as the medals go, they are a decent size and weight, which is nice, but don’t expect to be showing them off right away. Unlike other virtual medals, you won’t receive these until the series is over…. which for me, was closer to the end of July (the series officially ended June 30th.) Still, if you do the challenge and earn all four medals, they will come in a nice little box along with a runDisney tumbler… a little different than the average t-shirt for doing a race, but in honesty, something I’d probably use more. 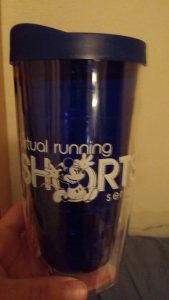 If you can’t get enough of virtual races, or just want something to show off your Disney side while you train, I really recommend you check out Best Race Bling. Personally, I love their story. They are a women and veteran owned company  created to encourage others to live a fit and healthy lifestyle. They also donate a minimum of 20% of their total income to various charities, so it’s nice to know that your purchase is still benefiting those in need.

I will be the first to say that their bling really is the best.  They have all kinds of medals to choose from, such as superhero medals, Star Wars inspired medals, medals featuring flowers or butterflies, princesses, and even Pokemon balls for those of you wanting something to show off how well you’re doing at playing Pokemon Go! I love that you can find a medal for all kinds of running themes… including Disney inspired ones! 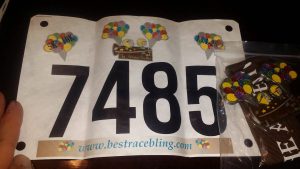 My sister-in-law first showed me their “Adventure is Out There” Up inspired medal. Up has always held a special place in my heart, and so I knew this medal was perfect…. Especially since I had dressed as Russell for my first runDisney event. The medal was a little smaller than I had imagined, but it was beautifully done, focusing on Carl and Ellie together with a bunch of balloons ready to start their adventure. 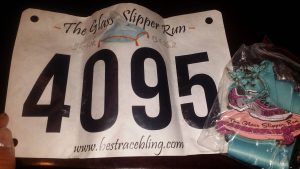 Another great Disney-inspired medal is The Glass Slipper Run medal. It focuses a running shoe on a pillow, along with two little bluebirds holding on to the shoelaces. For those of you who can’t compete in the Glass Slipper runDisney challenge, or the Princess ½ Marathon (or even those of you who are just training for it and want something to commemorate your progress, that could be a perfect choice as well. 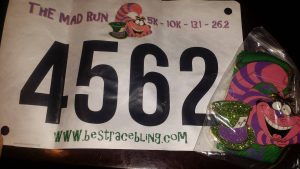 My favorite medal from Best Race Bling, however, happens to be their Cheshire Cat medal for “The MAD Run”. I love this medal, for several reasons: 1.) Alice in Wonderland was one of my favorite movies growing up 2.) I think you have to be at least a little “mad” to enjoy running and 3.) It is just so beautiful! I cannot get over the detail on this medal. The Mad Hatter’s hat next to the Cheshire cat is perfect, and it is so well done, it looks as if Disney could’ve released it themselves. The medal is also very sparkly and has a decent weight to it, so you really feel like you accomplished something when you’ve completed your run. 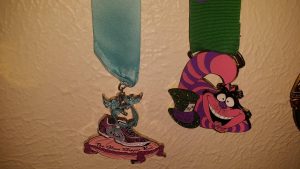 So are you ready to get started on your own virtual race? Well, I have some good news for you! Best Race Bling has offered to give away two medals and bibs to two different runners! You will have a choice of winning either “The Mad Run” Cheshire Cat medal or “The Glass Slipper Run”. You get to determine the distance you want to walk/run/crawl/skip/or saunter on down to complete the medal in the setting of your choice, and you don’t even have to pay for the medal and bib registration fee (though I do recommend you consider making a donation to the favorite charity or cause of your choice).

You must LIKE each Facebook page for the entry to count! Tips from the Disney Divas will verify each entry received. Good Luck!