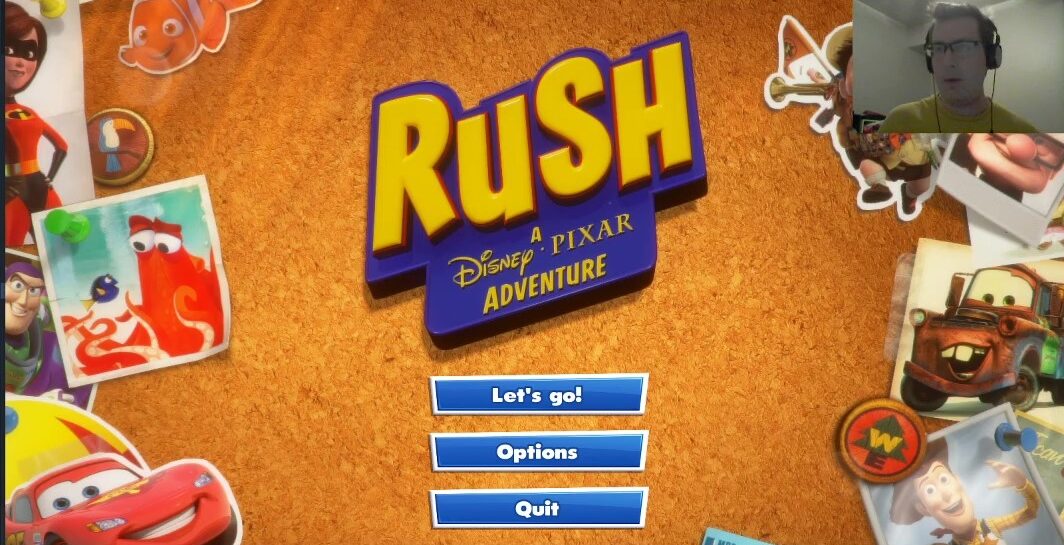 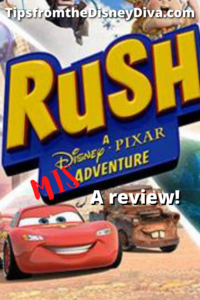 This looks just about the right size for a pinterest board. If I had one, that is. But I’m sure you do!

Disney has had a long history of video games and many of them, while not available in stores, are available on PC stores like Steam. A while back I reviewed “Disneyland Adventures” which was an enjoyable sim game oozing with atmosphere that made my travel-starved heart very happy.

The same people made another game that looked similar enough and I wanted to give it a shot. “Rush: A Disney Pixar Adventure” was a game made for the Xbox Kinect motion sensed system but was adjusted and brought over to PC and Xbox as a regular game. Now anything that has Toy Story in it is something that catches my eye, so let’s hop in and give it a shot.

Immediately I’m greeted with a Problem #1– but I’ll address that in a minute. For now, let’s just dive into the game. 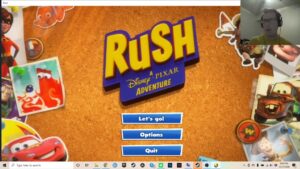 I mean, it looks like it could be good. But looks can be deceiving. Don’t judge a video game by it’s cover.

First thing we do is make our character. The character creation is a bit more robust than it was in the Disneyland game but, unlike that other game, you don’t unlock any cool extras like hats or t-shirts. This is it.

After a good solid 3 minutes of character options we are let off the school bus for our field trip to Pixar Park! Now at this point the game starts to show it’s muscles. The game is gorgeous! The characters look very Pixar and details like the grass and the buildings all look fantastic.

We are then instructed to go talk to the other kids, which I don’t want to do. I just want to play Toy Story games. So I get to the Toy Story world and problem #2 pops up.

Here’s a kid who says “wanna play Toy Story? I’ll be Sheriff Woody. You can be your own toy!” and I’m all like “No. if anyone gets to be Woody, it’s me!”

It’s clear that the game is capitalizing on the “worlds” of Pixar, but a big reason why the worlds of the movies are so cool is because of the characters. I don’t really want to be “nameless robot 3” when the opportunity to be Buzz, Woody, or Jessie is a potential.

The same basic premise goes for all the Pixar movies. A kid want’s to play a Pixar movie, casts themselves as the main character, casts you as a nameless extra, and then you run. 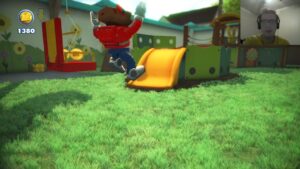 Gameplay! I guess. it’s a lot of running in a straight line. and even though it looks great, you’re moving too fast to enjoy it most of the time.

Your job is basically to follow a straight path with very limited puzzle solving (by limited I mean VERY limited. The hardest puzzle was “stand on this button”).

This presents problem #3. You’re running so fast in most cases that the beautifully crafted gameworld you are a part of doesn’t get any chance to resonate. You can’t soak in all of the neat details. Comparing it again to the Disneyland game, Disneyland is so slow paced that you can soak up every tiny detail of the world and that was where most of the fun of the game was. This Pixar game takes that opportunity and throws it out the window. I mean, how cool would that be? A walkabout game where you leasurely explore pixar worlds with a few minigames thrown in? That’d be WAY better!

I played Toy Story, Cars, and then went on to The Incredibles and then Problem #1 showed it’s ugly face again. The game crashed.

Now as far as specs go, my computer is about middle of the road. There’s plenty worse and a few better and I even made some special modifications myself. But my computer just didn’t have the processing power that the game apparently needs. This isn’t something I can just open up and change. This is an issue that requires a full new computer to adjust.

Now I went into the options and turned down a bunch of the features but my computer still couldn’t hack it. So the big question is as follows:

Is this game worth sinking a couple thousand dollars on a new high-end computer? No. no question about it.

There’s a cool game hiding under this game. If it was slower and more thought out in terms of gameplay rather than atmosphere then this would be a favorite, but it doesn’t hold up on nearly any terms. You don’t get to enjoy any of the real characters, the in-game premise is kind of dumb, you can’t even enjoy the atmosphere which is easily the best part of the game. I’d give this a solid pass. 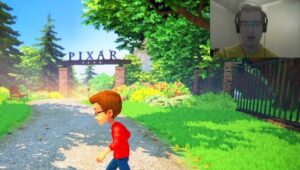 Look at it! It’s so pretty! I just wish it were better.

If you want a Pixar game experience, go to the same Steam store and get Toy Story 3 (an excellent puzzle/ platform/ sandbox), get Cars 3 (a wonderful racing game), get Disney Universe, or Disney Infinity, or Lego Incredibles. Get Kingdom Hearts 3 on consoles, anything would be more fun than this game.

And in the meantime, why not tell me what your favorite Disney video game is in the comments below! I’m always looking for something more to play and maybe I’ll do yours. But until then, thanks for visiting us at Tips from the Disney Diva and remember to keep wishing on stars.