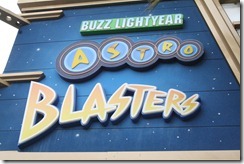 Buzz Lightyear and the Galactic Alliance need your help. Yes YOU!

Evil Emperor Zurg wants to steal batteries from toys everywhere so he can make a secret weapon. Your job, new Space Cadet, is to shoot your Astro Blaster at enemy targets. These targets are disguised as triangles, diamonds, squares and circles throughout the ride. Just point, aim and blast! 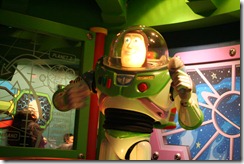 Buzz Lightyear Astro Blasters opened in 2005 at Disneyland. It is located in Tomorrowland, across from Star Tours and next to Astro Orbiter. The building formerly housed the Circle Vision Theater.

DIVA TIP: Do not be deceived by the long line that is out in front of the ride, as most of the queue for the ride is outside, and it moves fairly quickly thanks to the constant turnover of new cadets.

As cadets enter the building, they are welcomed to Star Command and the problem with Emperor Zurg is explained. Next, cadets are briefed by Buzz Lightyear himself, who gives the cadets a map of the Galactic Alliance and instructions on their mission.

Space cruisers seat two cadets. Heads up, unlike WDW, the blasters can be removed from the console. 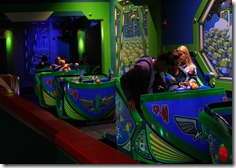 Space cruisers spin and turn to give cadets the best shot possible. You are in charge of how much spinning your cruiser does, so have no fear if you “don’t like spinny rides”. Each astro blaster has an optic safe laser that can be lined up in the center of target. Cadets simply shoot to rack up the points as the ride continues. Even the littlest of cadets can do it! 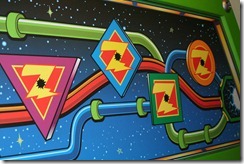 Diva Tip: Keep squeezing those fingers when you hit a target and watch those points rack up! Your blaster will light up when you hit a target, so you will not have to guess (like you have to do at Walt Disney World). If you miss targets continually, do not fret, after five times of missing targets, Cadets receive 100 points. Now for those SUPER competitive Cadets, hit the targets that are lit up for double the points. There are also secret hidden targets, worth BIG point values.

As Cadets exit the ride, there is a room with several computers that allow you to look at a picture of you completing your mission and your scores. This picture can actually be emailed to yourself, your spouse (ha, I scored more than you) or your Mom and Dad who want to know everything about your trip.

Diva Tip: You can send multiple emails, which makes this an AWESOME souvenir.There is also a screen which shows the highest point values for the day. I am proud to say that my husband has been on that list several times! The computers will record your initials to put up on the screen just like those old time arcade games.

The ride is accessible, with wheelchairs and electric vehicles waiting in the standard queue. There is a door right before boarding the cruiser that Cadets enter and there is an accessible cruiser available.

Children under age 7 must be accompanied by another rider age 14 or above.

I would give this ride has a scream factor of 2, simply because it is loud. My little ones are used to the noise by now, but they used to hide their head. I ride with my littlest in a Bjorn. My three year old can sit on his own, but has also sat on my lap to see. 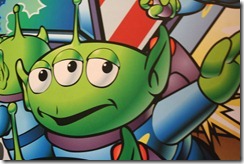 So the next time you head on over to Tomorrowland, be sure to stop by and help Buzz Lightyear and the Galactic Alliance on their mission.

After all, who can resist those cute little green faces?