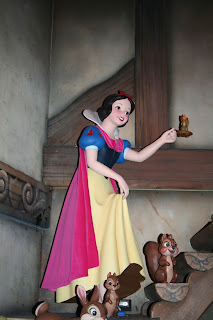 Snow White’s Scary Adventures, located in Fantasyland, was not originally designed to be a dark ride. Oh, it was designed to be a dark ride in terms of being a ride that is indoors with physical darkness. The original ride, however, was not dark in it’s storytelling. One of the few rides left in Disneyland that was there on opening day, Snow White’s Scary Adventures was originally called Snow White and Her Adventures. The idea was that you, the guest, was Snow White and then the ride took you through her story. Both the earlier version and the modern day version are based on Disney’s Snow White film from 1937. The transition to the darker storytelling came with the Fantasyland renovations in the early 1980’s.

Diva Tip: Find the apple on the book stand at the start of the cue. It’s magical! Above the ride, be sure to check out the moving curtains and you might catch a glimpse of the Evil Queen.

On the way to the ride, the guest pass through a castle and right by a dungeon. This is somewhat of warning of what is about to come. Guests are loaded onto mine cars, as the beginning of Snow White’s journey is quite jolly. The mine cars seat four guests and are all named after one of the Seven Dwarfs. Quickly, guests find themselves in the dwarf’s cottage and are treated to a sight of precious gems that they are mining. 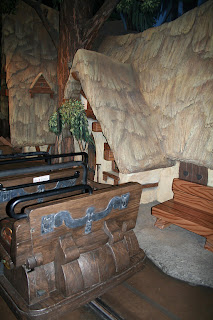 It is just around the corner, however, that the story becomes darker. The mine car heads through a dark, creepy forest. The trees seem to come alive, and the car heads through a magic chamber and dungeons with skeletons. The evil queen even tries to present you, the guest, with a poisoned apple!

The ride then shifts as the queen falls from a cliff. The next room proclaims that they all live happily ever after.

If the ride seems to present a disjointed story, it’s because it does. It starts out jolly, then is scary and then is jolly and all within a two and half minute time period.

The D’land Diva family finds this ride entertaining, but it is not one of our favorites. Perhaps this is because it focuses so much on the dark storytelling, when Disney is focused on happier things. 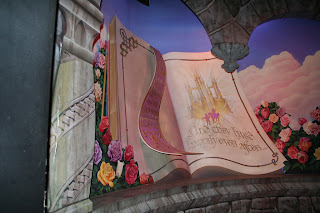 The scare factor on this ride is a good solid 5, simply because it can be menacing in spots- and young children might be frightened of the skeletons. The mine car is not fast moving or particularly jerky, it is more the content in the ride that makes it scary for some.

Wheelchair and Electric Vehicles enter through the exit of the ride and are assisted onto the vehicles.

Diva Tip: Visit this ride in the evening. The wait times are far shorter.