Star Wars Family of the Day at Disney’s Hollywood Studios 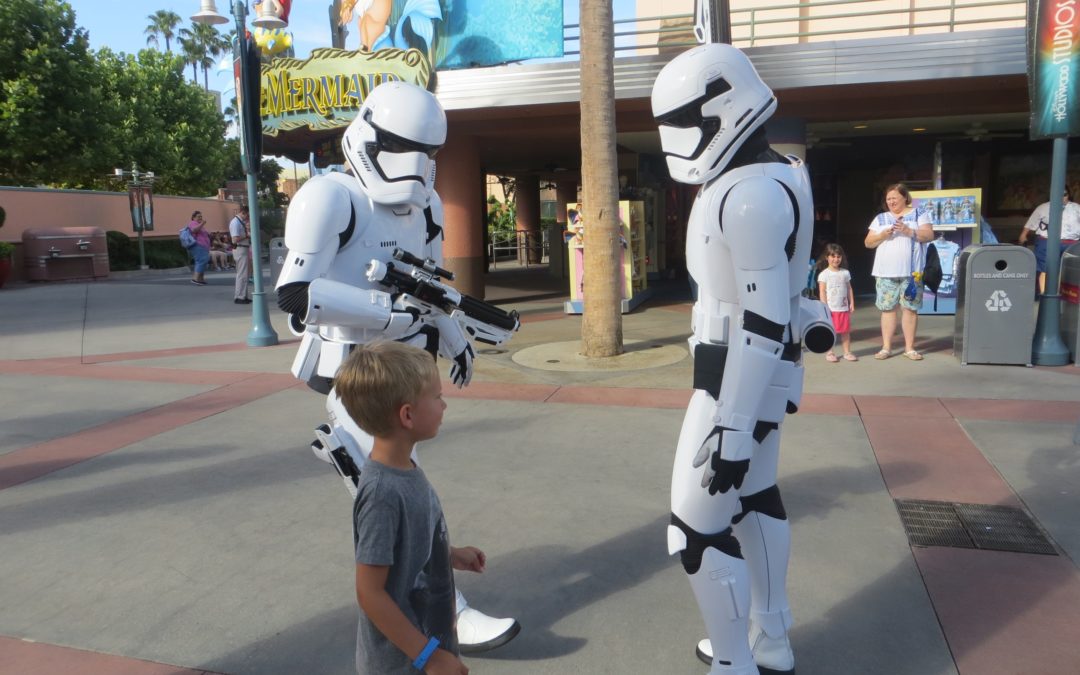 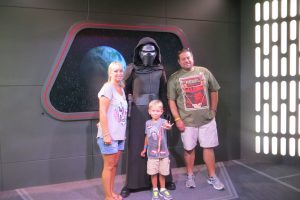 If you are like me you may not have even known there was such a thing as Star Wars Family of the Day… but we got picked to be that family! On our Hollywood Studio day, we had arrived early so we could sign my son up for Jedi Training. We managed to get that done very quickly, in fact the actual park was not even open by the time we had finished sign ups.  Once people were allowed in the park, we decided to  head over to meet Doc McStuffins before the line got too long, but when we got there she was not yet out for meet and greet’s. The Storm Troopers happened to be walking out so we stopped to watch them and after they left, we started talking to a couple of cast members who were standing outside the Star Wars Launch Bay controlling a BB-8 droid.  After we traded a couple of pins with them, one cast member was asking my son some general questions about where he was from and then told him we had been picked to be the Star Wars Family of the Day!

Well of course we were excited, even though we had no idea what that meant. She asked us to follow her and we all went into the Star Wars Launch Bay Cargo Area. Once we were in the cargo area, she informed us we would each be given an official Star Wars badge. You could choose the light side or the dark side and you could choose to be a specific type of character or an inhabitant of a Star Wars planet.  My son chose to be a Bounty Hunter, I chose to be an inhabitant of Jakku and my husband was from Yavin IV. After making our choices we wrote our names for the cast member and she had our badges  printed up with our names in the Star Wars language of Aurebesh. (Tip: these are available for purchase in the Star Wars Launch Bay Cargo Area). 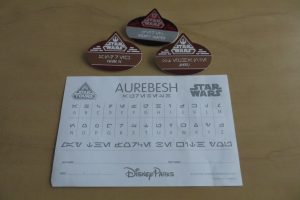 Once we were given our badges our Star Wars Tour Guide took us on our personal tour of the Star Wars Launch Bay. We were first taken to meet the Jawas. My son was able to make a trade with them (TIP: They prefer to trade for shiny or jeweled objects). 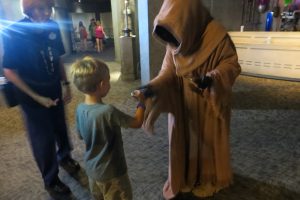 Next on our tour we were taken to the front of the line to meet Kylo Ren and then Chewbacca. My son was wearing a Kylo Ren shirt and this made Chewbacca upset. My son had to explain to Chewbacca he was a rebel spy and not really a bad guy. Chewbacca wasn’t so sure but when he saw my husband and I had on shirts from the light side, he decided to give my son the benefit of the doubt. 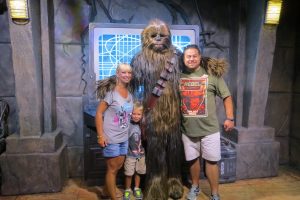 After our visit with characters ,our tour finished up with looking at the memorabilia located in the Star Wars Launch Bay and then a return to the Cargo Area where we were then told we could be on our way. This was a great experience, especially for my Star Wars crazed son. I know many people will ask how they can get chosen for this, and I honestly can only say it’s about being in the right place at the right time and talking with the cast members. Always be nice to the cast members, you never know what can happen!