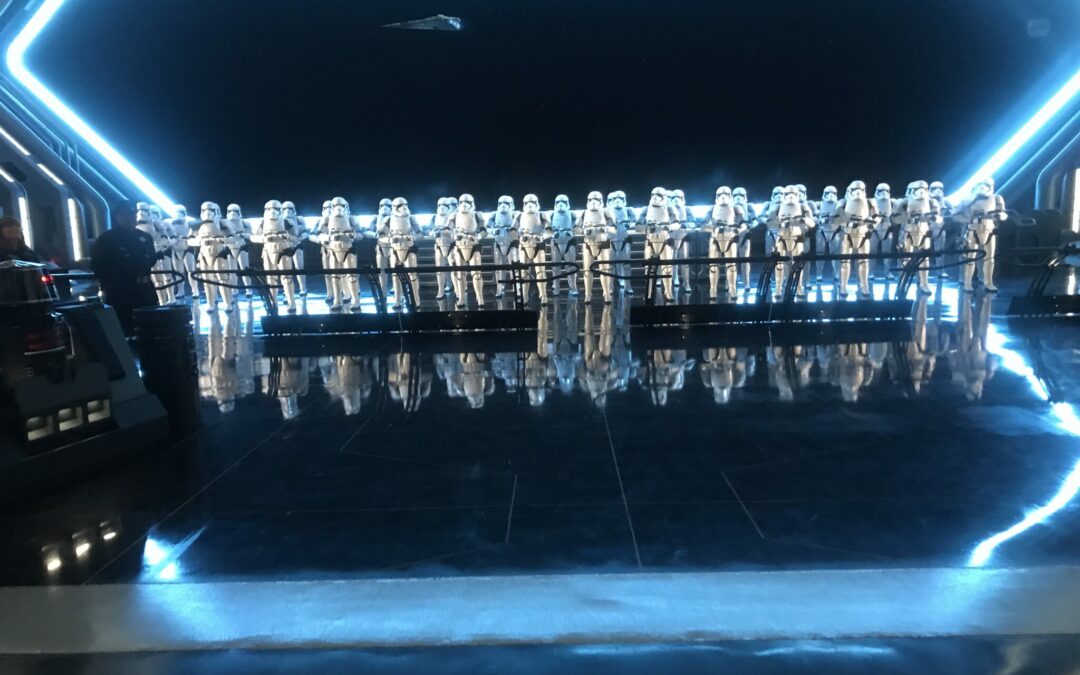 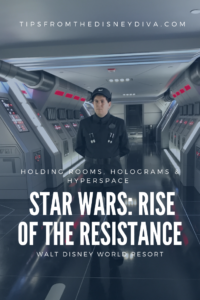 Despite the impressive attention to detail, when Star Wars: Galaxy’s Edge opened at Disneyland in May and Walt Disney World in August, it felt a little incomplete. Sure, flying the Millennium Falcon was a dream come true, and finally stepping into Oga’s Cantina, sipping blue milk, and casually passing by Rey as you stroll through Black Spire Outpost was an experience any Star Wars fan relished. But the main attraction had not yet opened.

On December 5, 2019 that changed – at least at Walt Disney World Resort. (Disneyland – January 17, 2020.) Star Wars: Rise of the Resistance,  the most anticipated attraction at Galaxy’s Edge, opened. And the galaxy noticed.

I don’t want to spoil the experience for anyone, so while I’ll outline some general information so you can get an idea of what Star Wars: Rise of the Resistance is all about, I won’t get into spoilers until later (and there will be a warning before so you’ll know when to stop reading if you want to have the full, unbelievable, jaw-dropping experience a first-time rider can anticipate.)

The general theme of the attraction, as you would expect from its name, is a Resistance battle against the First Order.  Guests are recruits to the Resistance cause. Since it has become evident the First Order has infiltrated Batuu, Resistance fighters have come to evacuate us. But along the way the transport ship is captured by the First Order, we’re taken aboard a Star Destroyer for interrogation, and a rescue mission ensues.

Star Wars: Rise of the Resistance is an attraction anyone can certainly enjoy.  You don’t need to be a devoted Star Wars fan to have fun – it is engaging for everyone.  In fact, while you aren’t assigned a role of any consequence (you don’t need to shoot stormtroopers or pilot a ship, for example) you are kept involved in the story in a way that made me feel like an extra in a film!

There are several “holding” areas before you actually board the “ride,” but each is very interactive, and the cast members do such a tremendous job of staying in character that I hardly noticed it was a holding room.  The Imagineers did an outstanding job of completely immersing you in this story!

Although the experience is family-friendly – we saw many young children having the time of their life! – there are loud noises, some dark moments, and the cast members who play First Order roles can be slightly intimidating. Disney labels the attraction as appropriate for kids, tweens, teens and adults.  The height requirement is 40.” There are some minor virtual drops and scenes, comparable to what you might experience on Star Tours.  The cars you ride in move both forward and backward as well as spin, similar to the cars in Toy Story Midway Mania, but not quite as jerky.

Diva Tip: If you’re planning to visit while boarding groups are required, the most important tip I can provide is to arrive AS EARLY AS YOU POSSIBLY CAN! Do not assume arriving at the published opening time will allow you to join a boarding group.  (Note, due to COVID the boarding process has changed, and changed again you will want to make sure you check the process before you travel!)

It’s also important to know you DO NOT need to join a boarding group to enter Galaxy’s Edge. Boarding groups only apply to Star Wars: Rise of the Resistance. You are free to visit Batuu, enjoy Millennium Falcon: Smuggler’s Run, or anything else you’d like to do at Hollywood Studios.  You also do not need to stay in Hollywood Studios once you have joined a boarding group. You can leave and return to the park when you get the push notification that your group is now boarding.

With that general background, I’ll share some of the details of precisely what the attraction entails.  If you can avoid spoilers, I’d recommend doing so.  My first time on Star Wars: Rise of the Resistance was absolutely phenomenal, partially due to my lack of knowledge as to what to expect. But if you just can’t help yourself or need to know what will be suitable for your family, read on.

SPOILER ALERT!!! The remainder of this article will contain spoilers for Star Wars: Rise of the Resistance. 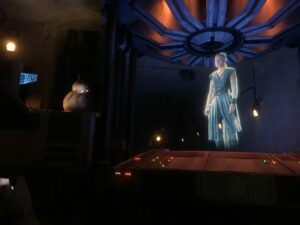 As new recruits to the Resistance, you’ll be gathered in a holding room and told that BB-8 is preparing your briefing. Soon you’ll enter a ready room where you’ll watch BB-8 roll in and out of view, preparing for your transport.  You’ll also receive a briefing from a holographic image of Rey, which is extremely well done from a technology standpoint.  She explains a covert Resistance team led by Finn has infiltrated a First Order Star Destroyer which is now headed to Batuu.  We are no longer safe on this outpost. Rey also stresses how vital it is that we not disclose the location of the new secret base on Bakura.

Next you’ll walk outside (yes, outside!) to board your transport ship.  The cast members do a wonderful job of creating a sense of camaraderie here – you really feel as though you’ve joined the Resistance and have a sense of resolve to escape Batuu.

Diva Tip: In Star Wars lore, the Resistance forces might greet each other with “Ignite the Spark” and the response is “Light the Fire!”  If you want to be an outstanding recruit, try saying it to one of the Resistance fighters helping you escape. 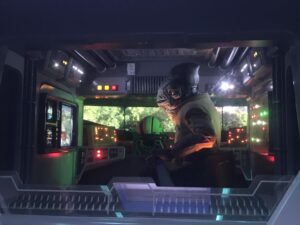 Once in the transport ship (another holding room where you stand), you’ll see multiple video screens with different Resistance fighters.  Lieutenant Bek is in command, and Poe is commanding a squadron of X-wings to escort us to Bakura.  Both will be on video monitors.  At the back of the transport ship is a window where you can see virtual images of what’s happening outside the ship – your take-off from Batuu, the battle you eventually are engaged in, everything!  The ship has some slight movements from side to side and up and down, so be sure to hold onto the many handrails available.

Shortly after your transport ship takes off, it is intercepted by the First Order.  You’ll watch on the video screens as the battle unfolds, and feel the ship shake and rattle.  The Star Destroyer eventually gets its tracking beam on your transport ship, and you are captured.

When the doors open for you to board the Star Destroyer, you’ll find an impressive scene. Most impressive.  The room you enter is enormous and there is a squad of stormtroopers greeting you.  The entire tone of the experience changes, as all the excitement and urgency up until this point is suddenly replaced with an ominous and somber atmosphere.  You’re being taken for interrogation.

Diva Tip: It was at this point we noticed some of the younger children begin to show some apprehension. The change in atmosphere is dramatic and could be a little too realistic for some children. 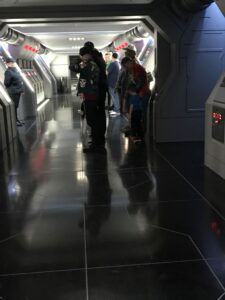 Occasionally, the officers will speak to recruits. “Stand up straight, this isn’t a luxury hotel!” “Hands off that bulkhead! I just had it scrubbed!” Or, as someone was taking photos, “Your scanner won’t save you now!” The cast members ability to remain in character adds such a level of immersion to the story.

As you’re placed in groups, you’ll be told to stand on certain colored lines and to remember your color.  This is how they eventually assign seating for the ride portion.  But first, you’ll be ushered into an interrogation room.  It’s a small, rather dark, triangular shaped room with no windows.  There’s a balcony above you, and General Hux enters. (Actually, this is a video, but it is incredibly realistic!) Kylo Ren quickly steps in and interrupts to personally conduct the interrogation. However, before he can begin, he is needed on the bridge, and leaves. 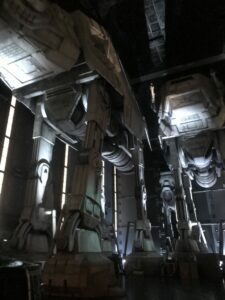 As you stand in silence for a moment or two, you begin to wonder what’s next.  Then a red laser beam emerges on one of the walls.  It’s Finn’s team of Resistance fighters here to get you off the Star Destroyer and take you to Bakura!

Again, the sense of urgency is created.  You’re hurried into ride vehicles based on the color you were assigned.  Your vehicle is piloted by an R-5 droid, and you begin your adventure to get off the Star Destroyer. There are plenty of twists and turns, loud noises, scurrying under AT-ATs and a few minor ups and downs.

It really is a little sensory overload – there is so much going on you can’t possibly see everything. We rode four times over the opening weekend, and each time we discovered something new.  You might even spy Finn!

Diva Tip:  The Disney Parks Play app associated with Star Wars: Rise of the Resistance is centered on Finn’s mission on the Star Destroyer.  Try playing the game while you’re waiting to enrich your experience! 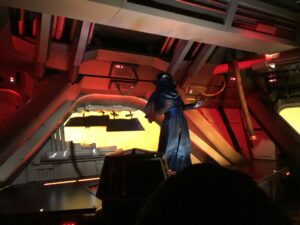 Of course, since this attraction is the “Rise of the Resistance,” you eventually are able to escape the Star Destroyer and land safely outside (yes, outside again!).  May the Force be with You.

So, are you ready to join the cause? To help plan your trip to Batuu, I’d suggest contacting Patricia at All for Dreams Travel.  She has excellent advice and tips for booking your vacation to Walt Disney World (or Batuu!) and her services are FREE! So Ignite the Spark!  I’ll see you in Galaxy’s Edge!