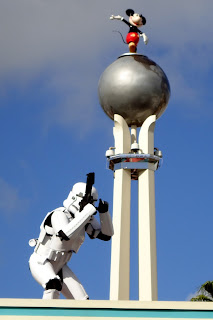 For four 3-day weekends each year, Disney’s Hollywood Studios is invaded by characters from the Star Wars universe. It’s a great time for those with a Disney and Star Wars obsession. My family was a little unsure about going because we’d heard that the crowds can be crazy! I finally convinced them that it would be fun to give it a try. We decided to go on a Friday during the second weekend in 2012. This was the perfect time to go. Star Wars Weekends are a blast!

There are several special events during Star Wars Weekends: Jedi Training Academy, the Star Wars Celebrity Motorcade, the Padawan Mind Challenge, celebrity autographs, character Meet & Greets, behind the scenes shows, as well as the Hyperspace Hoopla. Each day is packed with a lot to see and do.

The Star Wars fun begins before you enter the park. Stormtroopers have been stationed above the gates and make comments about the crowds. They point out odd looking characters to each other and talk about what strange creatures the crowds are. Our favorite part was when the Stormtroopers decided that everyone must be holding up those little boxes (cameras) and pointing them as a way of greeting. The Stormtroopers then decided to greet the crowd in the same manner. It was hilarious! Throughout the park, you can hear many different themes from the Star Wars saga. I have always loved John Williams’ themes, so I really appreciated this touch.

The Jedi Training Academy is extra special during Star Wars Weekends. The sign up station is moved near the Indiana Jones Stunt Spectacular and they take 30 kids for each show. Diva Tip: If you want to get a guaranteed spot, be there when the gates open and head immediately to the sign up station. Spots are filled very quickly, so you may wish to sign up during the week when it’s less busy. 15 Padawans, or Jedi Trainees, are up on the stage and 15 are on the ground in front of the stage. Jedi Master Vance Nadal trains those onstage and Ahsoka Tano, Anakin Skywalker’s Padawan, trains those on the ground. The Padawans are taught a series of moves that they will be using to fight the Dark Side. Then, Darth Vader and his Stormtroopers arrive, along with a female Sith named Asajj Ventress. When my niece was selected to participate, she was delighted to be trained by Ahsoka and fight Asajj, as you can only see them during special times, like Star Wars Weekends.

Star Wars Weekends feature many character Meet & Greets that can only be found during these four weekends each year. The lines can be long, but you should be able to meet at least a few of the characters with relatively short wait times. Each character location has a fantastic backdrop from the films and a brief description of the characters that appear there. In Darth’s Maul, we met a young Luke Skywalker. He was really nice and looked enough like Luke to be convincing. Sometimes, R2-D2 and C-3PO appear with Luke. After Luke, Princess Leia was meeting fans in the same locations. She also appears with R2-D2 and C-3PO at times. Near the Star Tours face painting station, we met Queen Amidala. The line for Amidala was fairly short and we only waited about 15 minutes. Near the speeder across from Star Tours, Chewbacca and a couple of Ewoks were posing for photos. In the Streets of America, near the San Francisco backdrop, you could meet either Anakin Skywalker, ShaakTi, Mace Windu, or Kit Fisto. Near the Phineas & Ferb and Cars Meet and Greet areas, you could find Captain Rex, Clone Troopers, Asajj Ventress or Ahsoka Tano. In the covered area near the Backlot Tour was a very long line to meet Darth Vader. By the ABC Commissary, you could meet Darth Maul or Goofy in his Darth Vader costume. Across from him, you could meet Boba or Jango Fett and stand with your arms and legs in shackles. Between the ABC Commissary and the Great Movie Ride was the area for Jedi Mickey, Leia Minnie, and Duck Maul. In addition to these character locations, there are also wandering characters, including Jawas, Tusken Raiders, Stromtroopers, and Tam Wesel.

During our visit, we only met three characters, but they were all fantastic! Luke was very personable and kind to my niece and even spent several minutes talking with her and looking at her autograph photobook. Amidala was very in character and told us about her time in the Galactic Senate. ShaakTi suggested unique poses for each group of guests and really had quite a variety of fun poses to choose from. She was fantastic at putting guests at ease and getting them involved in some Star Wars fun.

In addition to the various costumed characters, different celebrities are available for autographs each weekend. To meet these celebrities, you must obtain a Fast Pass for that celebrity near the entrance to Hollywood Studios. There is a limit of one Fast Pass per person, so you must choose wisely. Also, the guest whose ticket was used to obtain the Fast Pass must be present to receive the Fast Pass, so you can’t send one person with all of the tickets for a group to get your Fast Pass. Once you have a Fast Pass, you can go the the autograph for your chosen celebrity at the designated time to get your autograph. Also, you can only have one item autographed and one photo taken. Honestly, I’m not sure it’s worth all of the hoops you have to jump through, so my family and I decided not to get any celebrity autographs.

The Star Wars Celebrity Motorcade is a parade of Star Wars characters. The parade lasts about 20 minutes and features groups of Stormtroopers, classic Star Wars characters, Mickey and friends in their Star Wars costumes, and cars full of Star Wars celebrities. Unfortunately, the celebrities can be somewhat obscure, such as a voice from the cartoons and may not be interesting to young children, but the costumed characters are a lot of fun. If you want to watch the parade, you’ll need to get a seat early. I would recommend finding your spot at least 90 minutes before the parade starts as spaces fill up quickly.

The Padawan Mind Challenge is a trivia trial for kids age 11 and under. You do have to preregister to participate in this challenge. Kids use their knowledge of Star Wars: The Clone Wars to become Padawans, or Jedi Trainees. You can signup near the ABC Sound Studio, beginning when the park opens, but spaces fill up fast. There are only two shows a day, around 2 PM and 6:30 PM. The shows take place on the large stage set up in front of the Sorcerer’s Hat. The crowds in this area can be very large, so if you’d like to watch the challenge, be sure to check your Times Guide and arrive early.

There are several special Behind the Scenes shows each weekend, hosted by one of the co-hosts of Star Wars Weekends. Ashley Eckstein, the voice of Ahsoka Tano, hosts Behind the Force: an insiders look at Star Wars: The Clone Wars cartoons. James Arnold Taylor, the voice of Obi-Wan Kenobi in Star Wars: The Clone Wars, hosts two different shows. The first, Stars of the Saga, invites that weekends celebrity guests to sit down for an interview about their work. The second, Obi-Wan and Beyond, is a glimpse into the world of voice acting. James Arnold Taylor voices around 150 characters, so he is the perfect actor for such a show. 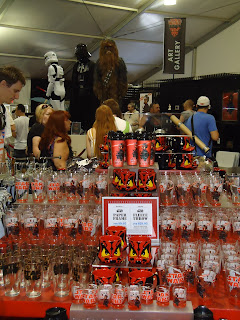 One of the favorite stops for collectors during Star Wars Weekends is the special shopping area. Available only during Star Wars Weekends and located through the gates near Rock ‘N’ Roller Coaster, the name and theme changes yearly. In 2012, the shop was called Darth’s Maul. During the opening weekend the line was a 90 minute wait to get in and a 90 minute wait to get out. By the second weekend, there was no wait to get in and very little wait to get out. Darth’s Maul was a giant tent filled with Disney exclusive Star Wars merchandise. Limited edition merchandise is also available. 2012 saw the release of a new collection of women’s clothing designed by Ashley Eckstein, the voice of Ahsoka Tano. The Her Universe collection debuted at Darth’s Maul and included many shirts for women and girls as well as a few costume hoodies. The Princess Leia hoodie sported her famous hair buns and the girls Ahsoka hoodie looked just like Ahsoka. for the true collector, there were Darth Vader and Chewbacca costumes that cost over $100,000 each. Some of the limited edition goods were only available as a purchase with purchase. One was a photo frame with Duck Maul and Jedi Mickey. There was also a polar fleece throw with Duck Maul and a pin with the same design. There were quite a few pins that had been created especially for the event and two series of Vinylmation as well. We waited about 5 minutes to make our purchases, but the wait to purchase limited edition merchandise was 20-30 minutes. One of my favorite items was the Star Tours name tag. I purchased one with my name in Aurebesh, the language of the galaxy. You can also choose your home planet from one of the 15 available. I chose Endor because I love Ewoks. And new for 2012, the Droid Factory, a fun build-a-droid spot now permanently housed at Tatooine Traders. 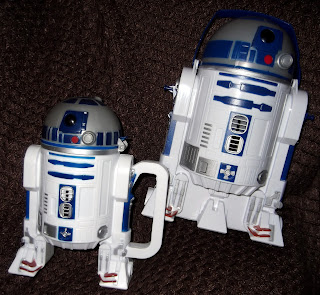 One of my favorite collectibles from Star Wars Weekends was the R2-D2 popcorn buckets and lidded cups. The buckets were available filled with caramel popcorn, churros with chocolate sauce, a kids corndog and chips meal, or even a kids power pack with a cheese stick, carrots, yogurt, goldfish, and a cookie. The cups were available with either frozen lemonade, a milkshake, or hot fudge sundae. Other Star Wars treats included a Darth Vader cupcake, chocolate peanut butter flavored.Yum!

The final show of the night is the Hyperspace Hoopla. Described as an intergalactic dance competition, this show is loud and raucous. The characters dance to modern music with modern accessories. I have to say, this show was my least favorite part of Star Wars Weekends. The music is very loud! It can be heard throughout the park and is especially loud near the stage, which is located in front of the Sorcerer’s Hat. I was also disappointed in the music, accessories, and dance styles that were used for the show. They were rather suggestive and not very family friendly. I wouldn’t recommend taking small children to the Hyperpace Hoopla as I consider it to be an adult show.

In all, I really enjoyed attending Star Wars Weekends. The characters were a lot of fun, the shows were great to watch, and the atmosphere was fantastic. I have always loved Star Wars and would recommend going to Star Wars Weekends to any fan.