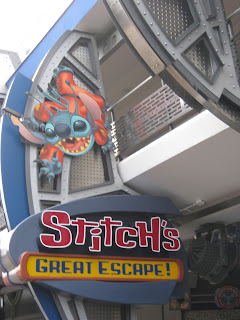 Stitch’s Great Escape
By Florida Diva All photos by Florida Diva
This attraction in Tomorrowland has guests enter a futuristic briefing room where you are assembled for training. Your job? To transport level 1 galactic criminals to the holding facility. It is explained that you’re not ready to deal with level 2 criminals and as the overview continues an alarm sounds and you are informed that a level 3 criminal has just been captured. As the sergeant pleads with the commander, insisting that you can’t handle a level 3 on your first day, it becomes clear that there is no choice. 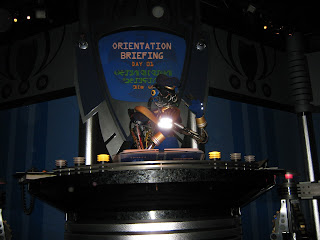 Everyone is quickly moved into the holding room to take their positions and await the arrival of the level 3 criminal; you guessed it, Stitch.

As you sit in the round room with shoulder bars securing you in your seat, the transport begins and soon Stitch is in the center of the room, held in his transport vial. But it isn’t long before he’s up to his old tricks and outsmarts the plasma cannons pointed at him. He runs rampant through the ride and cuts the electricity plunging everyone into darkness. You can hear him running around and even feel him come up behind you to sniff your hair.  He finds someone’s lunch and you’re treated to the lovely aroma of his loud belch when he’s finished. 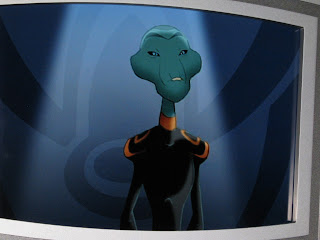 Eventually they get emergency power back on and he runs through the rafters as the plasma cannons miss with every shot they take, causing further damage to the facility. In darkness once more, squeals come from other members of your group as he bounces around on shoulder harnesses causing them to press down on the occupants of that seat. Finally, the lights come back on and Stitch is on the transport platform once again. He’s hotwired the system and transports himself to Earth as he taunts everyone upon departure. Tracking systems reveal that he has ended up in some sort of Kingdom in a place called “Flor-i-dah” where you see him climbing the castle walls and barging in on Cinderella. With the mission failed, you are officially dismissed and free to try and spot him as you continue roaming the park. 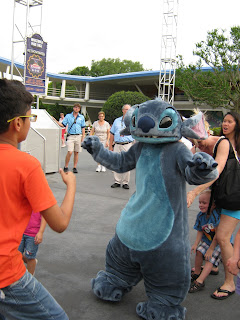 This attraction replaced the original “Alien Encounter” and there are many fans who are disappointed with the Stitch conversion. Although this version is milder in comparison, it still may be too intense for younger children who have a fear of the dark.
My overall impression is that it’s another testament to Disney’s eye for detail as it encompasses all your senses in the experience, but it lacks the classic charm of the all time favorites. Its fun the first time, but there’s no need to do it twice.
Restrictions: Must be 40 inches or taller to ride and is wheelchair accessible. Rider swap is available if you have children who are too small or may be afraid to ride.

Disney Diva’s WARNING – Kids have a tendency to FREAK OUT on this attraction. If time is tight or you have a little one, you might want to SKIP IT!