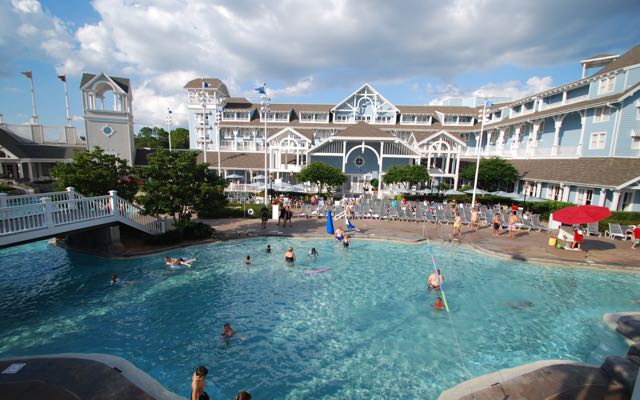 My wife and I have been Disney Vacation Club members since 2007, when we bought a small resale contract, and have added on with small point purchases periodically since. We have a very small 30 point contract at the Beach Club Villas, which we acquired directly from Disney. I essentially added this small contract because of it’s great pool, Stormalong Bay, which is only accessible for guests at the Yacht and Beach Club.

What makes Stormalong Bay such a great pool? Well, for one, it’s more like a water park than just an ordinary pool. It’s 3 acres consisting of 795,000 gallons of water and several different aquatic experiences which can be enjoyed by every member of the family. 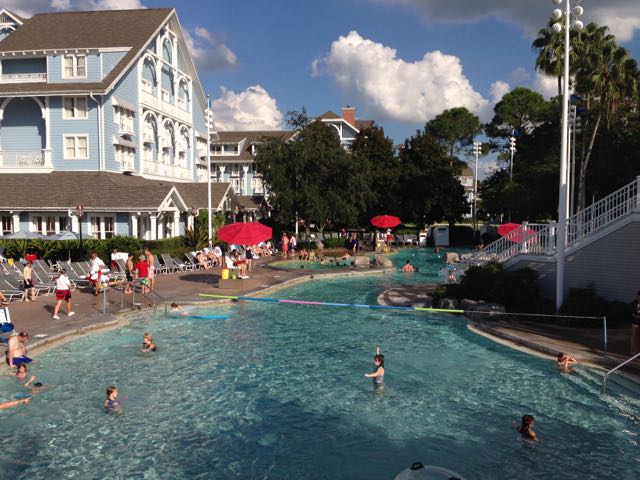 The pools are sand bottomed, but, as the currents and people move the swirling silica around, it tends to bunch, so you may find clumps in one area, and none in others.

Speaking of swirling, one fun feature, located by the end of the massive water slide (more on that in a minute) is a whirlpool. Hop, well, float in, and throw your legs up, and jets will have you going in circles!

On to that slide. Climb to the top of the replica shipwreck, and take a ride down the 230 foot long slide, which is one of the highest on Walt Disney World property.

TIP: Get there early, the lines get very long as the day wears on and the heat beats down! 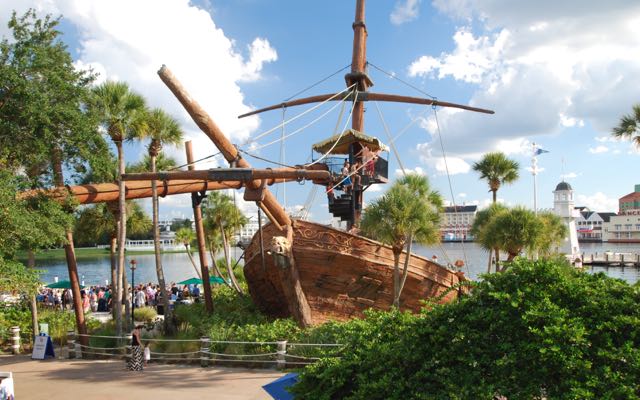 My favorite part of Stormalong Bay is the lazy river. I can spend hours just floating around here, until my wife has to insist we leave due to excessive pruning! I’ve read that you can rent tubes. I’m not sure where from, as I have always just found tubes floating unattended at all hours of the day! 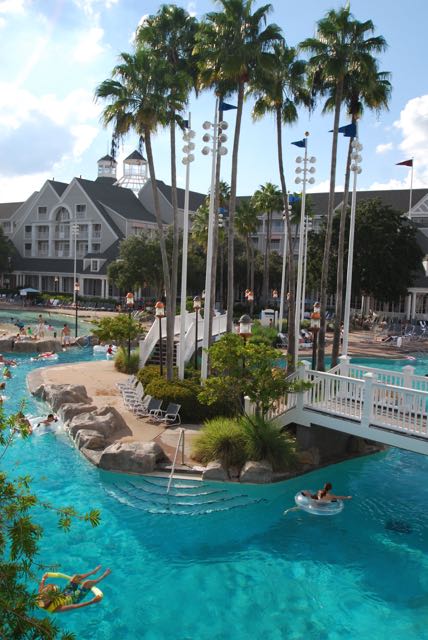 There are bridges that connect different areas of the complex, and it’s a great place to view the surrounding area, offering great views of the entire Boardwalk area as well. 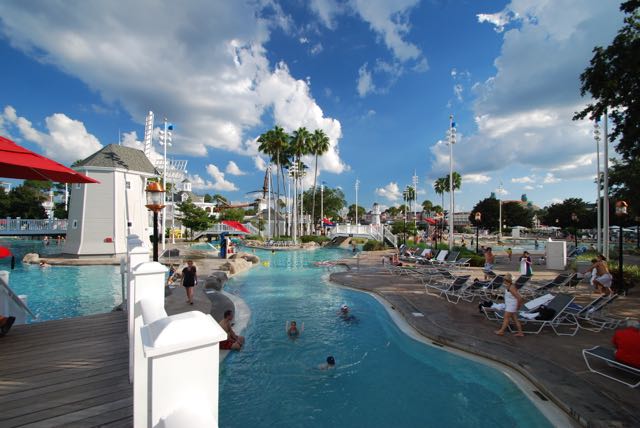 For kids, and kids of all ages, there are pool parties held each day. For young ones, there are sandy beaches for them to play on, with a gentle slope into a wading pool. 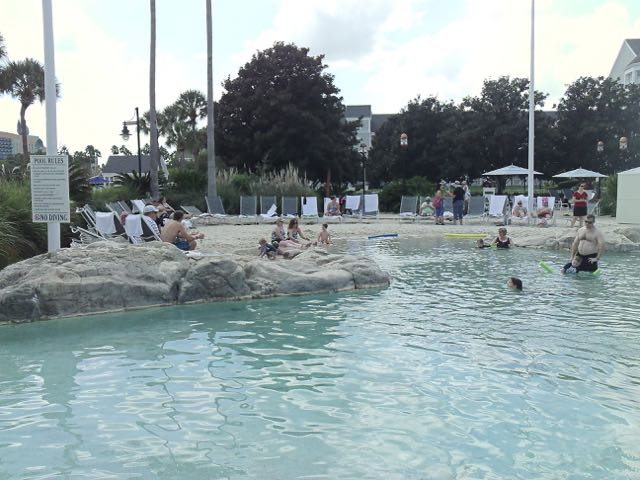 For grownups, looking for an adult beverage, Hurricane Hanna’s Waterside Bar and Grill offers great views with your beer and signature cocktails and frozen beverages. 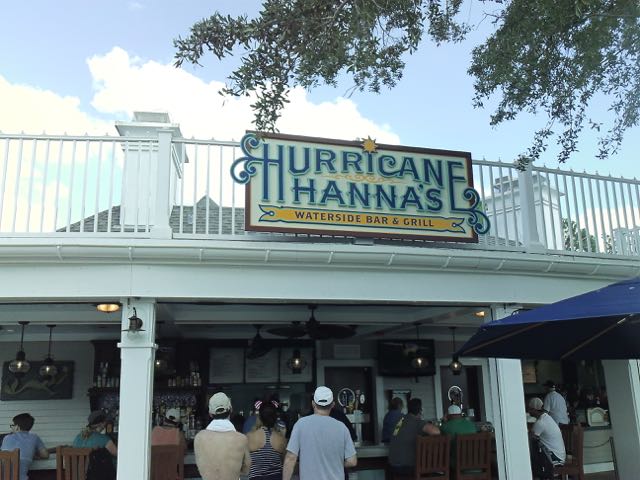 After a meal and drink or 3, you can soak in the quit and fairly hidden hot tub, or find a secluded spot under a waterfall. 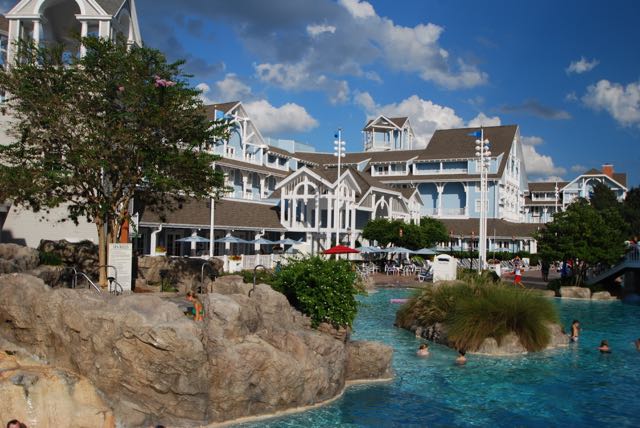 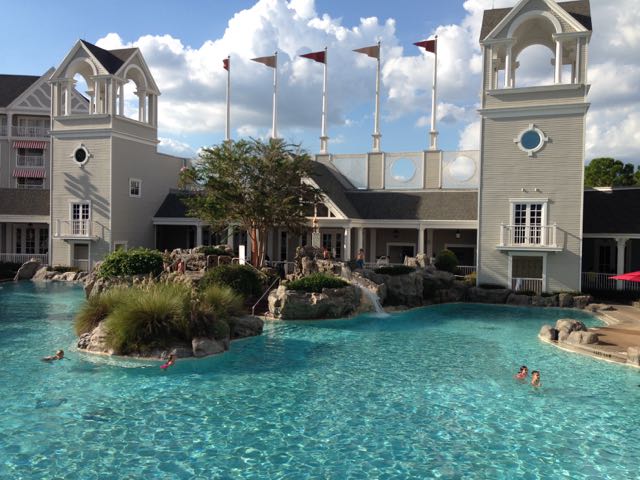 As mentioned above, Stormalong Bay is accessible to Yacht and Beach Club guests only, and there is actually a Cast Member located at the entrance checking Magic Bands. Hours change depending on the season.