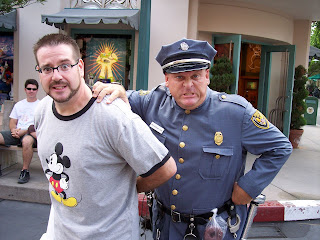 Me, being taken into custody by Officer William Club.

Author: Nick the Disney Devo (tee)Disney’s Hollywood Studios evokes the Hollywood of yester-years and that never was. It has it’s own cast of characters to help sell the nostalgia. The Citizens of Hollywood are a group of street performers that appear throughout the day, primarily on Hollywood and Sunset Boulevards.They perform largely improvised shows that are sometimes truly inspired. These shows are never the same twice, as they obviously change depending on what character is involved, and, of course, the audience participation.

My wife an I have personally been involved in one such performance!I was picked out of the gathering crowd, as I am, of course, a “world famous actor”who has agreed to star in the world renowned director Flavio Fellini’s next movie. 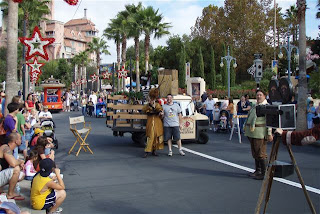 Here I am acting in a scene, with the Hollywood starlet, Victoria Throckmorton. As you can see, I’m channeling my inner William Shatner. 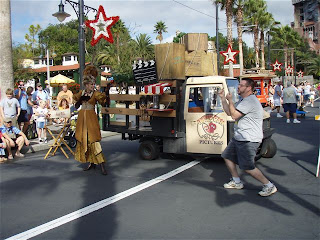 My leading lady has discovered I have been untrue, and is about to visit retribution upon me. 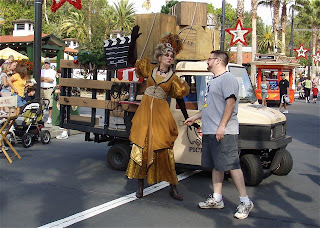 But, as I am too big a star to be involved with such a dangerous stunt, the director calls in my double, Hubert Hayseed. 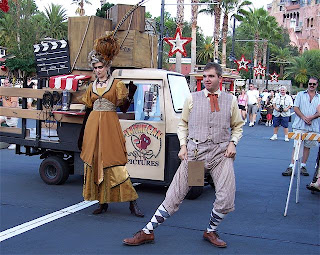 Hubert takes the wrath for me. 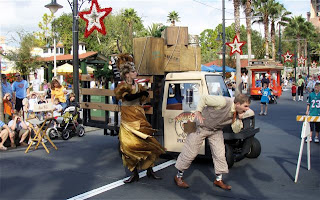 Up next is our make up kiss scene. 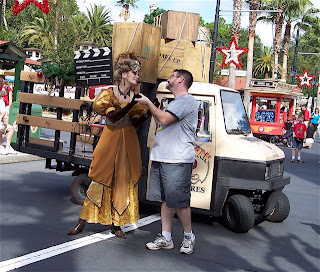 But I have it in my contract that I will only kiss my true leading lady…. 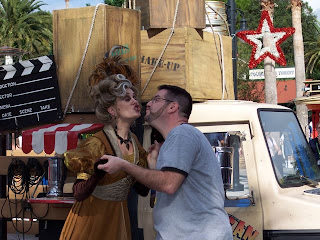 ..my wife, who is called from the sidelines…. 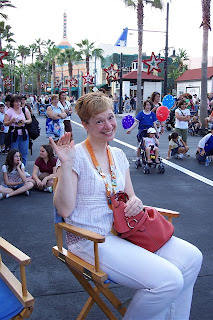 .. and we kissed. (the director missed the shot!) Here we are, giving a bow to our adoring crowd. 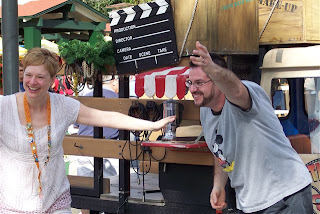 That was awesome. Look for an article in the future telling how you can perhaps get picked to be in a production too!You can often just have a one on one experience with a citizen. Here, I am getting a Lavatory FastPass from aspiring actress, Paige Turner. 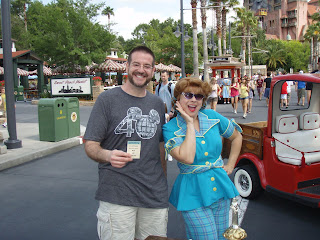 There are many different shows and skits the Citizens perform throughout the day.This one was early in the morning of our last trip. My wife and I were just finishing up our cupcakes at Starring Rolls, when many of the citizens walked, and rode by. This is Officer Percival Peabody. 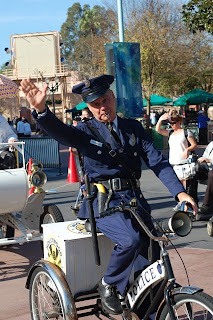 We followed them over to in front of the Sorcerer’s Hat, and watched the Roll Call. 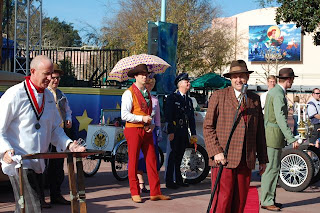 Tricks were performed, and trivia contests were held, with FastPasses given out as prizes.Ben Appetit performing a trick, assisted by Paige Turner. 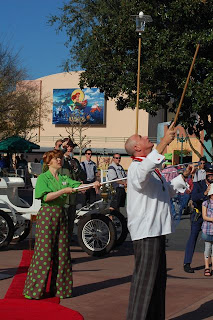 Also on our last trip, we saw the “Funniest Citizen in Hollywood Contest”, and it was great. The host, Jack Diamond, asks a random guest what they did for a living, and an item they used for their job, and the citizens would then have to tell a joke based on that item, in the form of “99 (insert item here) walk into a bar, and are denied service by the bartender” joke. The Citizens must come up with a funny one-liner to end the joke. For instance, someone said DVD.”99 DVDs walk into a bar, and the bartender says, “We don’t serve your type in here, get out!” and the DVD says “Hey, you’re making me blue-Ray!”Officer William Club, telling a joke. 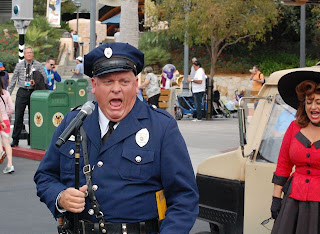 Evie Starlight, Stone Granite, and Beau Wrangler wait their turns to prove they are the funniest Citizen of Hollywood. 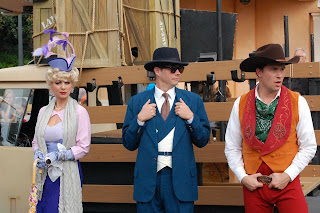 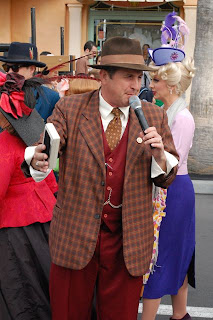 Bottom line, if you are in the Studios, and you see a Streetmosphere show starting, or just a lone Citizen, stop and take the time to enjoy one of the most unique and funny experiences Walt Disney World has to offer.

Nick is co-writer of the Disney Musings Blog with his wife Barbie.