Taking a Look from the Inside Out: a Review of Pixar’s Newest Feature Film

Have you ever thought about what it would look like if your emotions and thoughts were portrayed through animation? Well lucky for those of us who have, Disney’s new animated feature “Inside Out” does just that. I had the privilege of attending the Disney Visa Insider Access screening of “Inside Out” on Tuesday.

The movie takes us into the mind of Riley from the time she is born to age 11. Inside her mind, in Headquarters, are her five main emotions: Joy (Amy Poehler) Sadness (Phyllis Smith), Fear (Bill Hader), Anger (Lewis Black) and Disgust (Mindy Kaling). In Headquarters, these core emotions watch, monitor and control Riley’s day to day life and reactions to the world around her. They also have the task of storing all of the memories, including the five “core memories” that are responsible for forming Riley’s personality. These core memories form themed islands inside Riley’s mind (Family Island, Honesty Island, Friendship Island, Goofball Island and Hockey Island) that come to life in response to different situations and reactions in Riley’s life. 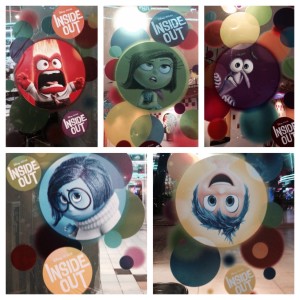 The story starts with Riley and her parents making a move from Minnesota to San Francisco, and Riley (and her emotions) are not thrilled. So when Sadness and Joy get literally sucked out of Headquarters through a transport tube and end up in Long-Term Memory, along with Riley’s crucial core memories, things go a little haywire. This leaves Fear, Anger and Disgust in charge of all Riley’s reactions and responses. You can imagine how that goes.

The storyline then follows Joy and Sadness and their epic journey to make their way back to Headquarters. Because what would the world be without Joy and Sadness? Along the way they encounter different parts of Riley’s mind including her Abstract Thought, Dream Factory, Imagination Land and her Train of Thought. They also meet some other characters that work and live in Riley’s mind including Riley’s old imaginary friend, Bing Bong (Richard Kind). Bing Bong is a fun creature that helps Joy and Sadness in their journey. However, Joy and Sadness become more worried the longer they are gone from Headquarters as they see Riley’s personality literally crumbling before their eyes without being able to feel joy and sadness. They know that the faster they make it back, the quicker Riley will go back to her normal peppy self. Along the way we learn that a balance of both joy and sadness in everyday life can lead to emotional harmony. 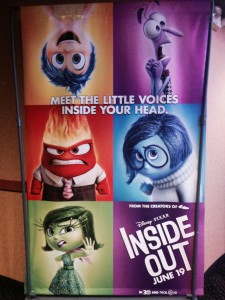 Overall I thoroughly enjoyed Inside Out. I thought the storyline was well developed and moved along nicely. It was funny and thought provoking at the appropriate times. There were many moments that appealed to the children in the audience and equally as many that will appeal to the adults (which is one of the many reasons why I love Disney/Pixar so much). The technical aspect of the movie that most impressed me was the animation of the emotion characters. Each one has an aura of pixie dust-like particles that float around their bodies. We especially see this in Joy and in Anger. When Anger starts to get steamy we can literally see his particles start to vibrate before he “blows up” with anger. We can also see them in close up shots of Joy and Sadness’ hair throughout the movie. Inside Out truly is a story of learning how to balance your emotions. 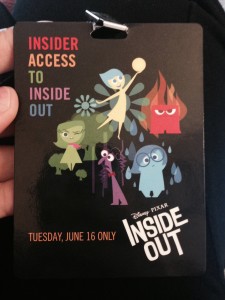 A few precautions to those of you considering going to see Inside Out. There are quite a few times in the movie that can be fairly emotional. Especially for those of you who are sappy, like myself- so bring your tissues. The other warning I will give is for anyone who has little ones who may have a clown phobia. There is one scene with a large, fairly scary looking clown that could bother children.

Aside from the movie itself I also enjoyed the short that played before the movie. The short, called “Lava”, tells the story of a lonely volcano. Through Hawaiian style song we learn that the volcano has a dream of finding love and not having to live his days alone. ((*Spoiler Alert*)) In the end, he finds love in a volcano that forms next to him. I loved the music in this short. The love story made me teary eyed. 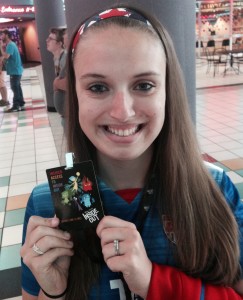 In review, would I recommend you go see Inside Out? Absolutely! I think it is a very well written and well executed storyline that has lovable characters with funny dialogue and heartwarming moments. I think Pixar hit it out of the park with this one. It is definitely one to add to my list of favorites.