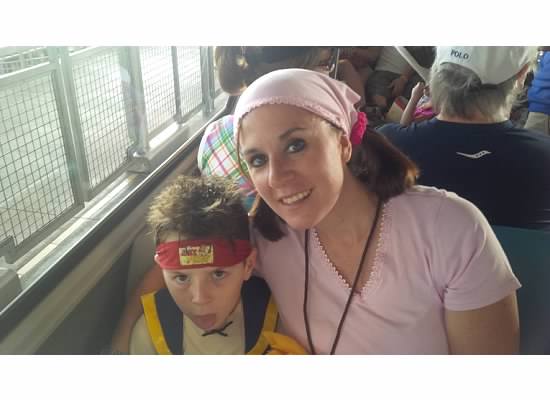 Our favorite time to go to Walt Disney World is in the Fall, especially in mid to late September.  Typically, school has just started so the crowd levels have died down significantly from the summer.  It is also a lot cooler than it is in the Summer months.  Not quite blue jean weather, but you are going to be comfortable in shorts or capris.  But, our favorite reason for loving Disney in the Fall is Mickey’s Not So Scary Halloween Party (MNSSHP).  We went for the first time last September and are going again in just a few weeks.  As the name states, it is “not so scary,” so it is friendly for all ages.  The only potentially scary part for little ones would be the headless horseman who kicks of the parade and some of the Disney villains.  I will warn you that tickets are a little pricey in my opinion.  But, I, and others have agreed, truly believe that MNSSHP is one of the best things that Disney does and well worth the extra dough. 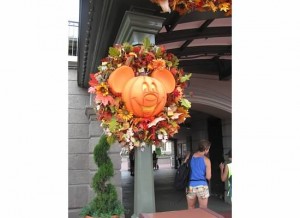 Before I give you my top eight favorites, I thought I would start with some recommendations about MNSSHP:

NUMBER ONE – DRESS UP – The biggest recommendation that I have for attending the party is to be sure and pack your costume.  It is so much more fun if you dress up.  Last year, my son and I went as Jake and Izzy from Jake and the Neverland Pirates.  This year we are going as Luke and Leia (not the metal bikini–for those who have seen my video rant urging people to please cover it up at Disney, you know the white robe was the only option for me).  But, be warned, there are people that let it all hang out at the party, so be ready to shield your eyes. 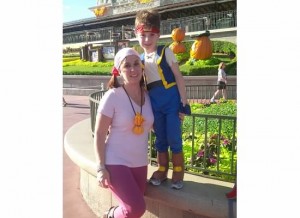 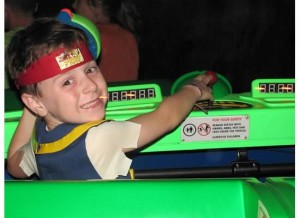 NUMBER TWO – TAKE A NAP BEFOREHAND – Also, the party goes until 1:00 AM.  While most recommend it, we never ever nap in Disney.  Our son, partially due to his ADHD, can go for hours on end without rest.  But, even he fell asleep right before the parade.  We let him sleep until the headless horseman came and work him for the parade.  I would highly recommend taking a nap before the beginning of the parade.

NUMBER THREE – GET THERE EARLY – The party does not start until 7:00 and all Disney personnel will tell you that you cannot get in before then.  But, you CAN get in starting at 4:00, so get their early.  We did not have hopper passes when we were there, so this was our one day to park hop.  We started in Animal Kingdom and headed to the party after the Jammin’ Jungle Parade (no longer there) ended.

NUMBER FOUR – FOR THOSE VISITING MAGIC KINGDOM AND NOT GOING TO MNSSHP – If you are planning a trip to Disney and particularly Magic Kingdom and DO NOT plan to go to MNSSHP, make sure you plan your Magic Kingdom on a day that the party is not schedule.  Otherwise, your day will end at 7:00 PM as you won’t be able to ride anything (See #7 below).

NUMBER FIVE – GET A MAP/TIMES GUIDE – Even if you know Magic Kingdom like the back of your hand, be sure and get a map.  It will tell you when and where all the special MNSSHP events take place, and, most importantly, where to go to get the candy!!

NUMBER SIX – RIDE HAUNTED MANSION – Had we actually ridden it during MNSSHP, this would have probably made the “favorite” list below.  But, we did not ride it.  I’ve been told by multiple people that the eerieness of the mansion takes on another level during the party.  So, you won’t want to skip it.  We plan on doing it this trip.

BELOW ARE THE TOP TEN REASONS WE LOVE MNSSHP!!!!

NUMBER ONE.  DISNEY VILLAINS – The Halloween Party is one of the rare times that they Disney Villains come out.  In fact, they have their very own show in front of the castle (Villains Mix & Mingle) ,and you can even get your picture made with them at the end.  Since we were dressed as Jake and Izzy, we quickly rushed to Captain Hook after the show was over and were able to get our picture with him.  As you know, some of the villains can be a little scary.  But, you know your kids and whether or not this may be something they are interested in.  Maleficent is typically the longest line.  It often starts forming even before the show starts.  And, I will warn you, these aren’t traditional Disney lines.  They don’t have ropes are anything, so people just can’t of jump up there when they can.  At least that is how it was for Hook. 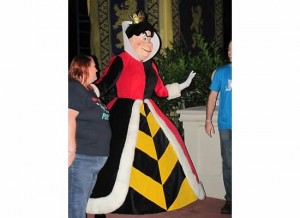 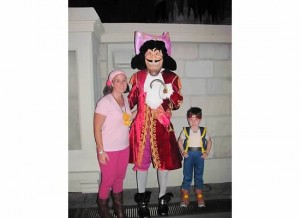 NUMBER TWO – HALLOWISHES – The traditional Wishes fireworks show gets a Halloween makeover during MNSSHP.  There is only one showing for this (9:30 PM), and you definitely don’t want to miss it.  When we were there, the show started right after the Villains show in front of the castle.

NUMBER THREE- CANDY!!!!! – Holy cow at the candy.  I’ve never seen so much in my life.  They have HUGE tubs of it at all the trick-or-treat locations, and they magically never run out!  They provide you with a trick-or-treat back, but, honestly, I would bring your own, and make sure it is a big one.  The small ones that they provide fill up very fast.  Also, the trick-or-treating is not for the kids.  Adults, you paid for a ticket to, so be sure and get or bring your own bag.  Our son doesn’t eat most candies, but even he enjoyed getting the handfuls that they placed in your bag each time.  Check your map to see where the locations are.  They are easy to spot too as there is a lit pumpkin marking the location of each trick-or-treat line. 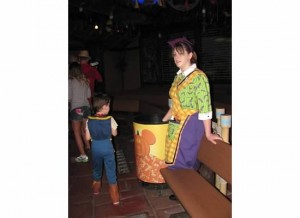 NUMBER FOUR – BOO TO YOU HALLOWEEN PARADE – Next to the relatively new Festival of Fantasy Parade, this is my favorite Disney parade.  The headless horseman kicks it off and then the fun begins.  My favorite part was the grave diggers who made sparks with their shovels.  It is little details like this that we discovery each time that keep us coming back for more. 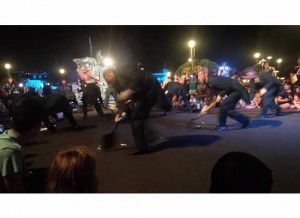 NUMBER FIVE- SPECIAL TREATS AND MERCHANDISE- As with other special events like Star Wars weekends and Mickey’s Very Merry Christmas Party, there are special treats/snacks that go along with the Halloween theme as well as merchandise.  They are usually listed on your map/times guide so you can pick which ghoulish treat you dare to try.

NUMBER SIX- THE SEVEN DWARFS – Another rarity that comes with MNSSHP is a chance to meet all seven dwarfs. We found this to be one of the longer lines, and, since our son is not really into the characters, we decided to forego the wait and just snap a quick pick of all of them. 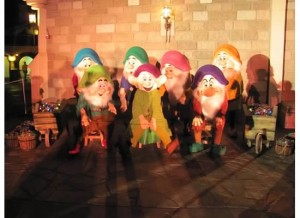 NUMBER SEVEN- VIRTUALLY NO LINES – Obviously, they can’t feasibly kick everybody out of the park ones the party starts, so there are people there that did not purchase tickets to it.  But, they cannot get in certain areas.  So much so that it is really pointless for them to stay.  And, they can get on ZERO rides. They give you a wrist band when you come in the door, and only those with these especially magic bands can get on the rides or in certain areas.  It is rumored that the attendance is capped at 25,000.

Hope these tips and favorites are helpful in planning your next Disney trip!!!

One thing I did want to address briefly was a new app that was supposed to be part of the MNSSHP–Mayhem a the Mansion.  This app was supposed to be used to catch escaped ghosts causing mayhem in Magic Kingdom during the party.  You download the app from the App Store or Google Play, and the fun begins.  You could even take pictures and unlock rewards.  However, while it is in the 2014 brochure, I cannot find it in the app store.  I did a little research and found that numerous others had this problem.  One person even downloaded it, and it is no longer showing up.  If we learn that the app is working again, we will be sure and let you know via our Facebook page.  But, I wanted to at least warn you in case you were trying to find it without success.