Tangled The Series: A Champion of Fantasy 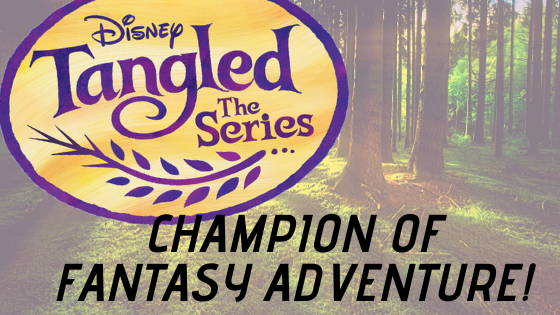 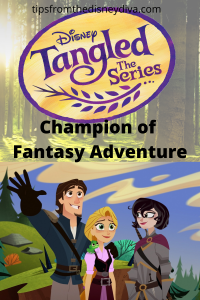 You know, This would be a pretty good time to save this image to Pinterest and share it with your friends. Just saying.

One of my fondest memories here at Tips was the one time I wrote a review for the TV movie Tangled: Before Ever After. This was an important moment for me personally as a writer but also it unironically created one of my favorite Disney movies, theatrical or otherwise. Beautifully crafted if a bit impossible to watch as a stand-alone movie.

Of course, this movie was actually a pilot for a TV series based on the Tangled and I was excited to watch the series on Disney Channel. But like it happens to all of us, I got busy. My TV schedule didn’t match my personal schedule and so I didn’t get to see any episodes of the show.

Thankfully, a convenient option for episodic TV appeared in the form of Disney Plus. The first thing I did? I watched Forky asks a Question. I mean, who do you think I am (see my pen name above). The second thing I did was start watching Tangled the Series. Once I binged the whole thing I decided that this show was the champion of fantasy adventure! Let me show you why:

Tangled The Series: Where The Story REALLY Begins

The first episode takes place minutes after the tie-in movie ends and begins to play with the characters introduced. The three characters we’re going to be following are Rapunzel, Eugene, and Cassandra- a new character who is Rapunzel’s lady-in-waiting and daughter of the Guard Captain.

Initially, the season eases us into the world of Corona and how it’s affected by its princess coming back. For the most part, everyone loves her but there’s plenty of flavors to go around. Plenty of episodes discuss some of the unconventional choices that Rapunzel makes as the princess and that the king and queen must now make in response.

Rapunzel doesn’t wear shoes! Former criminals now have free reign in the castle! The banner has been redesigned! The annual Good Will Festival doesn’t feel the same, LITERALLY, EVERYTHING IS PAINTED NOW! And just due to her inquisitive nature, Rapunzel seems to find her way into everyone else’s hobby. Usually, it’s a change for the better but it’s still hard on some people who, unbeknownst to the princess, end up stepping on people’s toes. 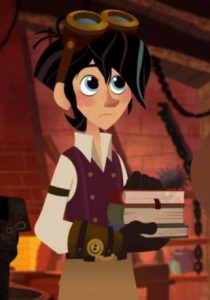 Varian became the center of the second half of season one. He’s initially friendly to our heroes but then things happen… The image is presented for promotion use.

One of these people is a boy named Varian. Varian loves the princess, has a huge crush on Cassandra, and grew up with the exaggerated tales of Flynnagin Ryder so meeting our three protagonists is a huge deal for him. He’s primarily an alchemist who believes that science is the new magic and can answer questions that Magic has left behind for hundreds of years.

Now Rapunzel needs to find out why her hair grew back and the only one who can really answer that question is Varian. Through him, we learn that there is some kind of connection to some mysterious black rocks that have been slowly creeping their way to Corona (see the movie for more information on that crazy important tidbit).

And then things get serious very quickly.

An old demon has been reawakened and sent a huge blizzard to Corona, freezing the people in (I’ve seen this story before. But… where…). Varian’s dad is in trouble and Rapunzel has to make a hard choice and break her promise to help Varian to save her kingdom. A beautiful predicament since, as we all know, promises are a huge part of what makes Rapunzel so great!

Of course, the problem is solved but the mysterious black rocks still exist leading Rapunzel, Eugene, and Cassandra on a journey into Season 2!

Season 2 is a giant road trip! The main trio and some of the more lovable characters in the show head off on an adventure where almost every new episode introduces a new location, a new problem, and new revelations about the characters, particularly Eugene. Where did he grow up? What was life like before Tangled? Former Allies? Current Foes? 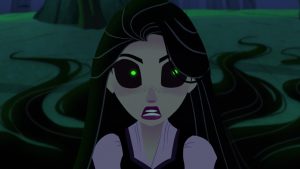 To be fair, this show gets really dark sometimes. I’m alright with a bit of dark fantasy but if you have sensitive kids, be watchful. Still, I don’t think this bars the show from family viewing or a PG audience. The image is presented for promotional use.

I knew I was in for a treat starting with the first episode. They go to Eugene’s old stomping grounds where the whole town is run by corrupt criminals and the old sheriff left. Three seconds in and I know- I’m watching a western. I love westerns! I loved these first few episodes!

We go from western to some crazy D&D style dark fantasy real quick! Curses, Alternate dimensions, ancient (dark) prophecies, a song opposite to the healing song (leading to some very intriguing implications)! And each episode goes bigger and more fantastic than the previous leading to a finale too good to spoil here!

There is a season three that is about half-way finished. It’s unfortunately not on Disney plus yet so I haven’t been able to see it but if these first two seasons are any indication, I’m going to be a really sad person to see this series end.

Just like the tie-in movie, the characters in Tangled The Series are the best part of it. The previously known characters shine bright and are reinforced by the new coming regulars. Cassandra is the biggest addition to the cast often becoming the main character herself, but along the way we also get Lance, Eugene’s old crime partner, HookFoot The brother of HookHand, and wonderful villains like Varian, Stallion, The Baron, King Trevor, and many many more! 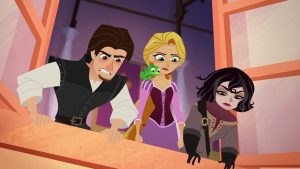 I mean, look at it! It looks SO GOOD! The image is presented for promotional use

Then the art style! It almost looks like paper cut-outs mixed with traditional animation that kinda makes me sad that we don’t see more 2D animation being used in theatricals. Dare I say, after watching two seasons of the show, it looks better than the theatrical movie!

There’s also a ton of original songs from the title “Wind in my Hair” to the season two anthem “Next Stop: Anywhere” that are real toe-tapper earworms! I still hum these songs when I’m not noticing! Of course, the reason is that the music in this show is composed and written by Disney legend Alen Menkin (you know, the guy who did Beauty and the Beast, Aladdin, The Lion King, and everything else you love?)

Essentially all the best parts of the tie-in film are included in the show and we’re better off for it. The world-building is solid, the magic makes sense, and each episode had me begging for more!

Tangled The Series: A Champion of Fantasy!

But is there anything bad about Tangled the series? “Nothing is perfect” I shouted in the previous review. Honestly, I have a hard time thinking of anything. It’s extremely solid and well built. Hilarious when it needs to be, mind-blowing when it wants to be, and emotional when it has to be. When I reviewed the movie I initially said that bringing Rapunzel’s magic hair back into the franchise felt like a mistake and a bit lazy, but I fear I spoke too soon when it’s revealed its implications for the show and the dangers it presents to Corona. So even my very valid complaint no longer stands to reason!

Note: As I was editing this, I did realize that the dark fantasy elements in Tangled The Series could be scary for younger viewers. While I wouldn’t say it’s anything “wrong”, and it services the story well, I think parents of children under 6 should keep an eye on their kids around the second season.

There have been pillars that could hold the title of “Champion of Fantasy” that everything is judged off of. Lord of the Rings, King Arthur, The Chronicles of Narnia. They’re all great.

Tangled The Series may not be the best fantasy adventure ever created, but it is to me.

Other than that, yeah. This whole thing was just a long review of a currently on-going series telling you that you need to see this show. Do yourself a favor. Turn it on. Binge it. Love it. And come back and tell us what you think about it in the comments. I enjoy our conversations.