Teen Review The Twilight Zone Tower of Terror at WDW 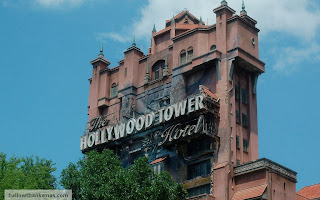 Author: Mini-Diva
In this teen’s opinion, the Hollywood Tower of Terror is one of the best thrill rides at Hollywood Studios!
As you meander through the queue, you learn about the legend of the ride…..

Halloween 1939: five unlucky souls were on their way down the maintenance service elevator in the Hollywood Tower Hotel, when lightning struck the hotel and dropped 13 floors. The people were never to be seen again! When you experience this paranormal drop, remember you are now past the 5th dimension into the Twilight zone!

From my personal experience, the “build up” to the ride is actually scarier than the ride itself. The queue is long and winds as well as twists, as it takes you down towards the “basement”. Then, once you load into your “elevator”, the story replays again, this time visually, as you are moved into position. Suddenly, the “window” pops open and down you go! Actually, you’re not dropping, the ride is pulling you down! Pulling you faster than the speed of gravity, which is why you see those awesome photos of people screaming with their hair straight up in the air!
And there’s another reason to ride this ride again and again. It’s different EVERY TIME. The ride randomly chooses which floor to rise and drop from, so it is different from ride to ride. So fun!
If you want to take the young ones on this ride, remember that there is a height requirement of 40 inches or taller! Also, think of the little ones because I have seen some kids being told to get on the ride by parents even though they were TERRIFIED! Don’t bully your children into riding rides. Do a rider exchange instead and let them ride things on their own time-table.
As a teenager, I love this ride and believe your teens will too! Be careful if you have motion sickness, as this ride can “take your stomach” and leave you queasy for the rest of the day. Also if you have a fear of heights, you might want to avoid it, or at least keep your eyes closed for most of the ride.
This is a MUST DO at Walt Disney World, especially for thrill seeking teens and adults.

The only reason I would give it a 4 is because most of the time, you are just plain SPEECHLESS!
Share this tip!