Ten Tips to Navigate Mickey’s Not So Scary Halloween Party 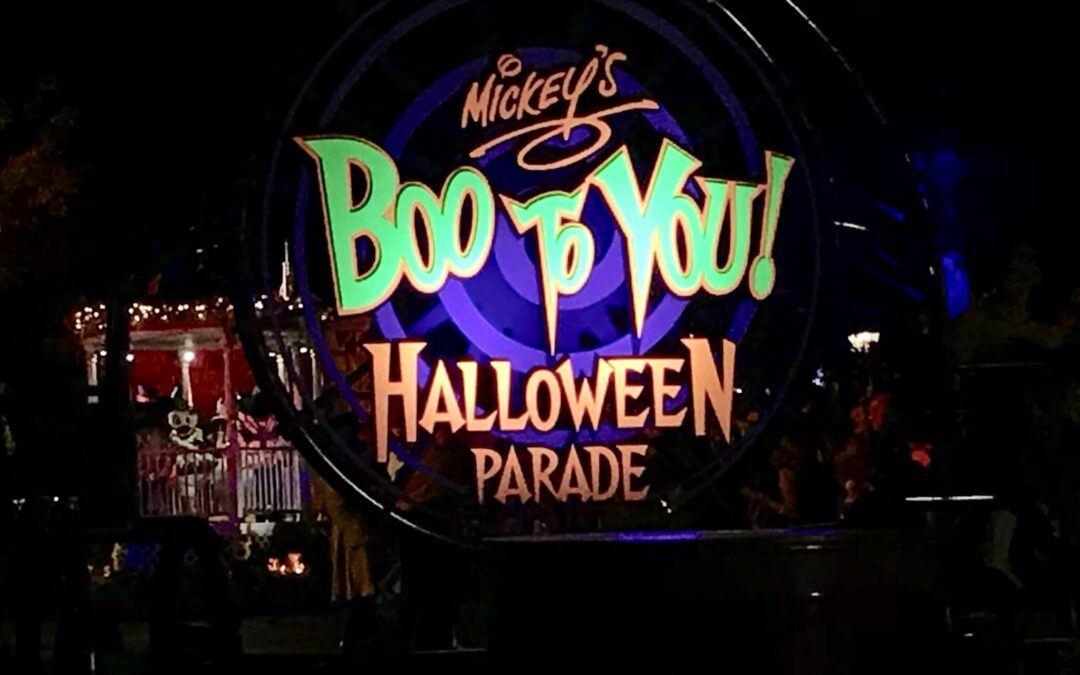 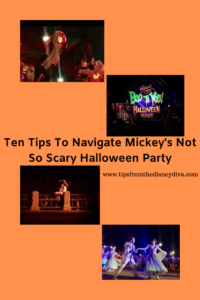 Ten Tips To Navigate Mickey’s Not So Scary Halloween Party

Mickey’s Not So Scary Halloween Party at Walt Disney World’s Magic Kingdom has long been one of my favorite hard ticket events. From the adorable Halloween decorations to the fun of being a kid and trick-or-treating, everything about it has always brought joy to my heart.  There Used to be a time when the party had a much lower attendance than the park saw during regular operating hours.  That time seems to be long gone, though.  Parties now have crowds that, at times, are much larger than the park sees during regular hours.

My husband and I attended the September 10th party this year.  I don’t know if it was because there was still a fairly low attendance due to Hurricane Dorian changing people’s plans, but the crowd level during the day for the week we were at Walt Disney World were the lowest we have seen for quite a few years.  Until the Halloween Party came, that is.  Suddenly, the crowd more than doubled.  It used to be worth it to pay the extra party ticket money just to avoid long lines to ride your favorite attractions, but now the lines seem to be even longer.  It appears that the old line about the number of tickets being sold is very low is now just that, an old and unrealistic line. 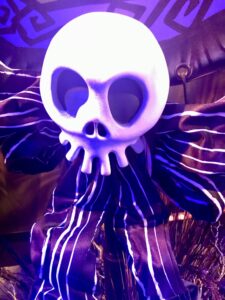 I’m telling you all of this to let you know that even on a good night, it’s impossible to do everything at Mickey’s Not So Scary Halloween Party, there simply aren’t enough hours in which to get everything done.  The lines for some of the more rare characters can be incredibly long, the waits for some of the top billed attractions are longer than they were in years past, and if you go to the party, you MUST attend one of the Boo to You parades, your night won’t be complete without seeing it, but yes, it does eat a chunk out of your precious party hours.  I can, however, give you a few tips to attempt to make the most of your night.

TIP 1: Do NOT make dining reservations during your party hours.  I see this mistake all the time.  This can easily take at least an hour out of your five-hour party, leaving you with only four or less hours to party.  You have spent a lot of money to attend this party, make the most of the time you have.  If you have to eat at a sit down restaurant, try to make the reservations for a time before the party starts, but your best option would be to save a quick service dining selection for party hours. 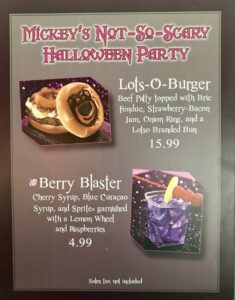 Special food options at Mickey’s Not So Scary Halloween Party 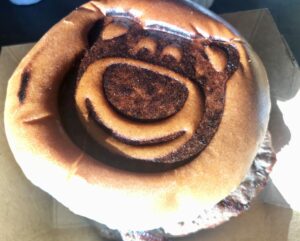 We enjoyed a quick stop into Cosmic Ray’s Starlight Lounge right before the party actually started.  My husband opted for the party exclusive Lots-O-Burger with Lots-O’s face on the bun.  He really enjoyed the flavor and it was a super cute burger!

TIP 2: Line up early for the more rare characters!  By early, I mean as close to 4:00pm as possible for some of these characters.  Characters with notoriously long lines are the Seven Dwarf’s and Jack and Sally. 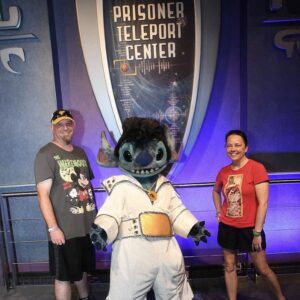 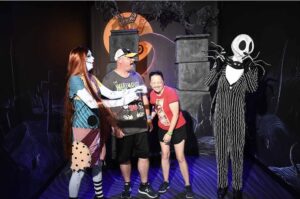 Jack and Sally Meet and Greet 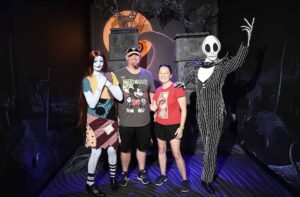 We only had two character meets on our to do list for this party, Jack and Sally and Stitch with his Elvis costume on.  We’ve never attempted a meet and greet with Jack and Sally because we have heard about how long the wait can be, but we decided to bite the bullet and give it a shot this year.  We didn’t make it by 4:00pm, it was a little after, so our spot was a little far back, but not so much that it worried me.  By the time they came out to start the meet and greet, it was very close to 5:00pm. I was actually a little dismayed over how slowly the line moved, I wasn’t prepared for it to take so long.  It turns out, it takes a while because Jack and Sally are really big into interaction (I wish I had known this to begin with so I would be better prepared for the sloooooow moving line.) Because of their interactions, this was actually one of my favorite meet and greets to date, and I’m not even a Nightmare Before Christmas fan (don’t hate me.) Check out this picture with my husband and I and Jack and Sally. I’m not going to tell you what was being said, but I was literally crying laughing.

TIP 3: Stake out your Boo To You parade spot early, no matter which parade you plan on attending. People can be really aggressive trying to get a spot. Pick out a spot at least 30 minutes or even more to view the parade from and have someone stake a claim. There are a few new appearances at the parade this year and you don’t want to miss them! 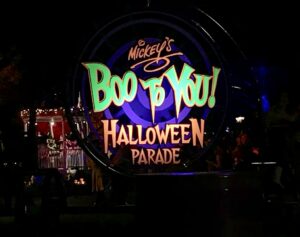 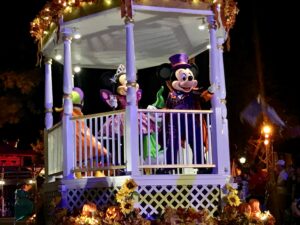 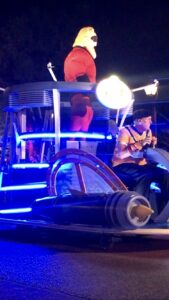 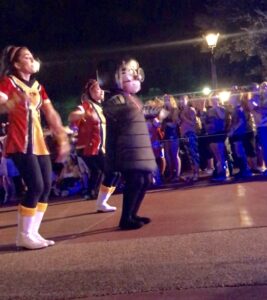 Edna Mode in Mickey’s Boo to You Parade 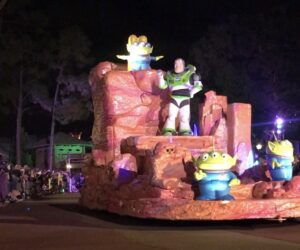 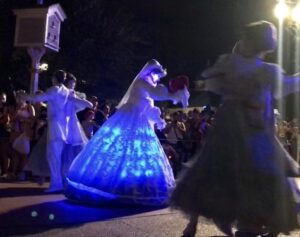 Mickey’s Boo To You Parade

I believe we grabbed our spot about 45 minutes before the parade if I’m not mistaken. We picked a really nice viewing area and took a seat, spreading out as comfortably as you can when seated on concrete for so long.  Having a good spot up at the front gave an excellent view of the Headless Horseman and all of the parade.  If you are up at the very front, please be kind.  There are little kids behind you, it’s okay if you stay seated through the entire parade so those smaller kids can have a view of the parade also. Don’t stand up and block everyone’s view behind you when you are at the very front, there’s no reason in the entire world you would need to do that, unless you just enjoy blocking the view of a young child.

TIP 4: If you aren’t set on watching the fireworks, take advantage of those really short lines at rides and attractions while everyone else is on Main Street waiting for fireworks.

We had an absolutely stunning view of fireworks while on Big Thunder Mountain Railroad and we only had to wait about 5 minutes to board our train since everyone else was waiting for the show.

TIP 5: Have fun trick or treating, but don’t waste your entire party doing it.  There’s so much to see and do, hit a few trick or treat lines, but try not to make it to every single one.  Another tip for trick or treating is to wait a little later in the night to do it.  The lines at the beginning of the party are crazy long, but if you wait until during or after the first parade, it goes much quicker. Also, if you hit a few lines at the very end of the party, they tend to give a little more candy than they do at the beginning.

TIP 6: Make sure you ride Pirate’s of the Caribbean, Haunted Mansion, Space Mountain and even Tea Cups during the party.  They have a few extra party exclusive things going on for these attractions during the party! 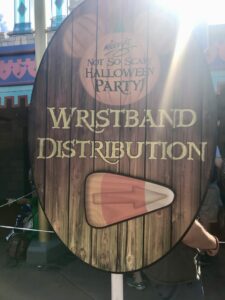 Mickey’s Not So Scary Halloween Party wristband distribution sign-Make sure you get your wristband as soon as possible!

TIP 7: Don’t forget your Mickey’s Not So Scary Halloween Party exclusive Sorcerers of the Magic Kingdom cards, these are extra cards exclusively for the party you can grab at the fire station.  You can begin getting these at 4:00pm as long as you have already picked up your party bracelet to show you have paid to attend the party. This is actually the reason we weren’t able to get into Jack and Sally’s line right at 4pm.

TIP 8: Go in with a plan! You and your family need to figure out what’s most important to you and prioritize it. Make a plan of what you want to do first. Not in to meeting characters? Great, you just saved yourself a ton of time, start hitting those rides. Don’t care about candy? Skip trick-or-treating and do something else fun. It doesn’t have to be a plan set in stone, but at least make an effort to have some kind of plan in mind so you can do what you actually want to do and enjoy the party.

TIP 9: Check your party guide for special magic shots available exclusively for the party.  We didn’t do any magical shots this year, but we did last year. They turn out really neat and there are several spots that have them available.

TIP 10: Be ready to have fun! If you went in with your plan and things just didn’t work out, take a breath, it’s okay. You are at one of the best after hours events Walt Disney World offers, just relax, enjoy the atmosphere and have fun!

Are you ready to start planning your magical vacation and maybe try one of the Mickey’s Not So Scary Halloween Party events, but you aren’t sure where to start? Contact our recommended travel agent, Patricia at All Dreams for Travel, and she can do all the work for you. Best of all, all of her services are FREE, all you have to do is click here to request a quote!