The 4 Scariest Rides at WDW, According to a 4-Year Old 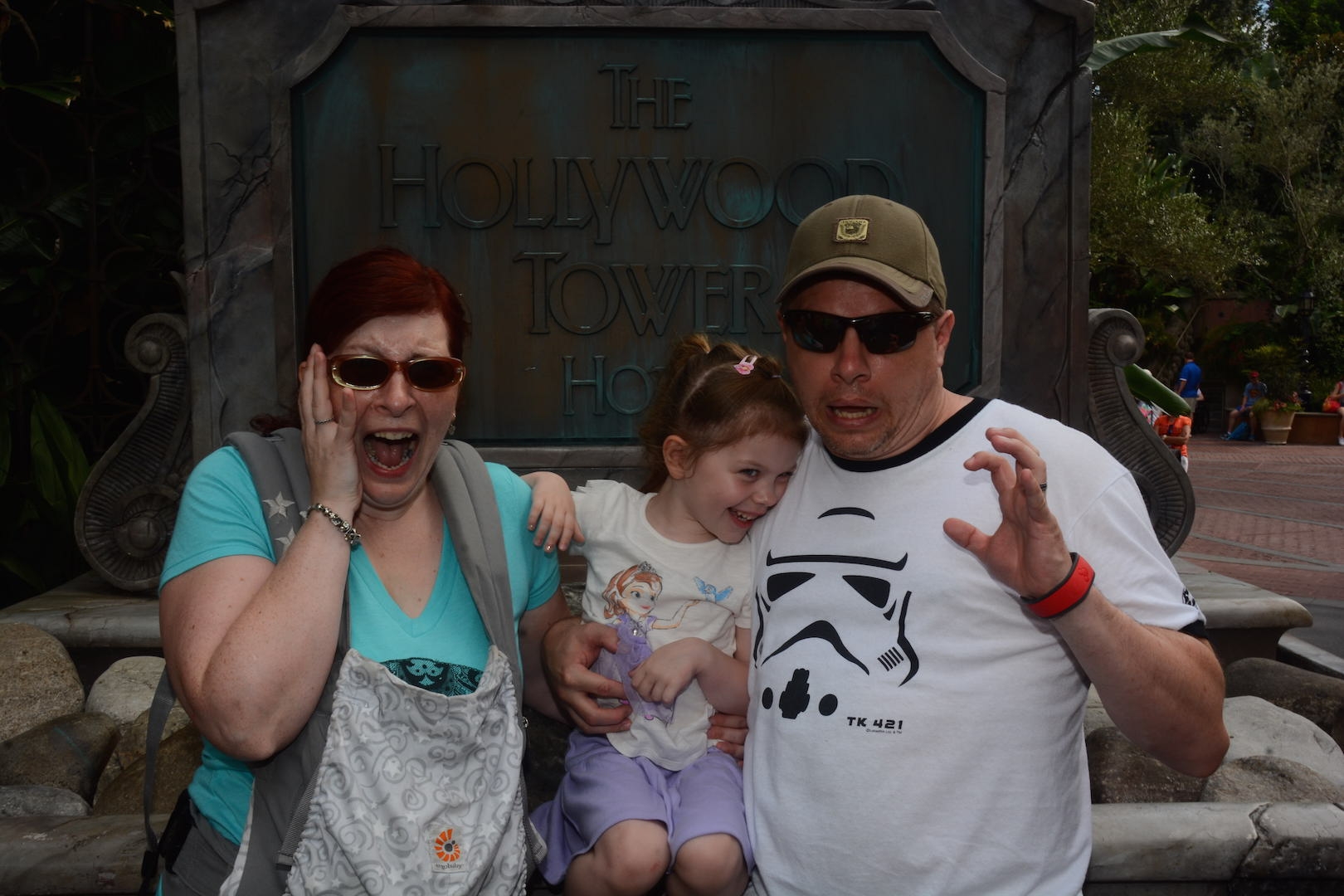 My 4-year old daughter and I were talking after school the other day, and I told her that one of her friends was going to go to Walt Disney World.  Fancy Free Daughter, though only 4, has already been to Walt Disney World 4 times as a result of our annual trips, and she considers herself an expert on the subject.  As soon as she heard that her friend was going to WDW, though, she immediately got concerned.  “Mommy,” she said, “I hope she doesn’t go on those rides.  They’re scary!  I don’t think she’d like them.  I should warn her.”

As my daughter and I talked about this, it occurred to me that her warnings to her friend might also serve as warnings to others who plan to bring their small children to WDW, mostly because not all of the rides that my daughter finds scary are the ones you might expect.  For the record, though, Fancy Free Daughter has not been tall enough on any of our previous trips to ride any of the rides that have a height requirement above 40″, including: Space Mountain, Expedition Everest, Mission SPACE, Primeval Whirl, or the Rock-n-Roller Coaster.  Out of all of the other rides available to someone of her height, though, these are the 4 that she deems the scariest and would warn her friends about.

Diva Tip: Click here to get more information about the height requirements at WDW. 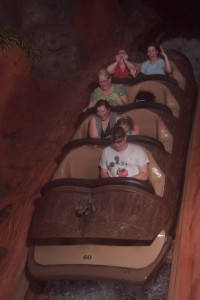 Fancy Free Daughter is in the second row, freaking out!

2. The Really Unexpected One, aka It’s Tough to Be a Bug! at Animal Kingdom: Honestly, I was super shocked when we walked out of this attraction and my daughter swore that she would never go again.  Ever.  This is a girl who will ride the Haunted Mansion over and over and not be phased in the slightest, but here, Hopper scares her out of her wits!  “Mommy, he said he was gonna squish us!”  The appearance of the Hopper audio-animatronic is a little unexpected in this attraction, and he is quite menacing, but it seems that the 4-D effects made things a little too real for my daughter.  “I never want to see him again,” she exclaimed about Hopper at the end of the show, saying, “he shouldn’t squash people.  It’s not nice!”

3. The One That’s Themed Too Well For Its Own Good, aka DINOSAUR at Animal Kingdom: Fancy Free Daughter loves all things dinosaur.  She plays for what seems like hours in the Boneyard.  We’ve eaten at T-Rex, and she loves the meteor showers.  Dinosaurs have captivated her since we read that first Magic Tree House book together, so I thought she would like this ride, too.  I was wrong.  “I thought we were gonna die!”  That’s what she had to say at the end of the ride, continuing with, “we almost didn’t make it back!”  I talked to her after the ride about how it was a story and that the ride wasn’t real, but she said, “it seemed real to me,” and that was that.  In this case, I think Disney did such a good job with the story and the theming that it captured her imagination and transported her back to the late Cretaceous period.  When I asked her about the darkness of the ride or the bumpiness, she said that’s not what bothered her: “I thought we were gonna get blowed up!”  She’s talking, of course, about the meteor effects at the end of the ride.  Even though I think I’ve convinced her that it wasn’t real and that the CTX Time Rover didn’t actually take us back to the time of the dinosaurs, I’m not sure she believes me.  That’s the magical power of a child’s imagination (and the thing that will, apparently, prevent us from riding this ride ever again). 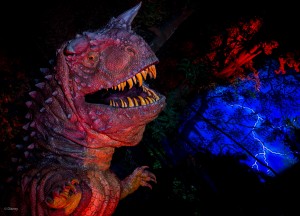 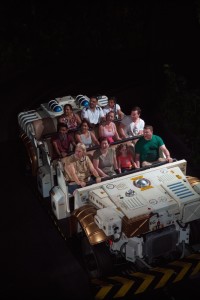 4. The One That’s Not Surprising at All, aka The Twilight Zone Tower of Terror at Hollywood Studios: What’s most interesting about this one, for me anyway, is the fact that after our daughter rode this ride for what she says was her first and only time, she made me tell the story of the ride over and over and over again.  She was captivated by the narrative: it was the height of Hollywood glamour.  The movie star’s family checked into the hotel and boarded the elevator to go up to their rooms when, all of a sudden, the elevator was struck my magic lightning that transported all of the elevator’s occupants into the Twilight Zone.  Of course, I went into lots more detail, spinning the story of the attraction for all it was worth, hoping it would be enough to encourage her to try it again.  Nope.  She just wanted the story.  Interestingly, she was so intrigued by the notion of the Twilight Zone, which I told her was a strange place where nothing is as it seems – you take a bath, but you get dirty instead, for example.  She loved it.  She also wanted to know more about this “magic lightning.”  Was it real?  “And where, exactly, is this Twilight Zone, anyway?” she demanded to know.  Of course, the thing she hated about this ride was that “it went up and down and up and down and up and down.  It felt like my belly was going to come up out of my mouth.  I thought the ride was gonna break me in pieces, Mommy!”  Needless to say, she’s quite convinced that nothing her father and I could ever do would compel her to ride this ride ever again.  She’ll keep asking me for the story of it, though.  Go figure. 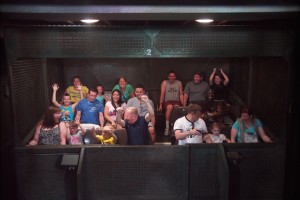 Fancy Free Daughter’s in the front row again (middle, right), and she’s on her way to the Twilight Zone!

Honestly, my daughter can find something redemptive and worthwhile in every other attraction in WDW, including, much to my chagrin, Stitch’s Great Escape.  These 4 rides, however, she wants Disney to get rid of.  In her words, “they’re terrible and scary.  They should never have rides like this at Disney!”  So there you have it.  If you’re traveling to WDW with small children, you may want to think about taking my daughter’s advice and avoiding these 4 rides altogether.  Maybe there is wisdom in her youth.

Diva Tip: If you’re concerned about how your small children (or even the bigger kids or kids at heart) in your party will respond to a particular ride or attraction, and if you’re not concerned about spoilers, there are plenty of YouTube videos you can watch before your trip to get an idea of what you’ll be in for.  Our favorite ride videos come from Big Fat Panda.  Here’s a link to his Twilight Zone Tower of Terror ride-through in multi-angle Pandavision.  Enjoy!

**Disclaimer: We at Tips from the Disney Divas and Devos hope you enjoy reading our articles, and encourage you to share any you feel may be of interest to someone else. We do ask, however, if you choose to share the photographs attached to our articles, you give credit to the photographer. Thank you for your cooperation and sharing our love of Disney!