The D Files: Something Strange is Going On in the Disney Universe

There are a lot of things that Disney doesn’t explain and are just plain weird. Here are three unsolved mysteries of the weird in Disney

Welcome to the D files. 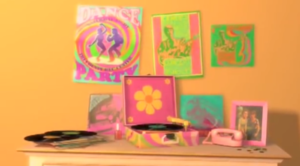 The two posters on the top left advertise a fictional concert for a fictional band called “The Lemurs” and on the Blu-Ray copy, you can see the date of the concert amongst all the green swirls as Nov. 25th, 1999. It’s not an important date, but it’s close enough to the release of the film to not have some significant meaning. We just don’t know what it is. Image owned by Walt Disney Studios and Pixar Animation.

So I’m not even going to pretend. I’m biased. I love Toy Story and as a fanatic of the franchise, I get questions about fan theories and such about the movie. One of the fan theories I get asked about a lot was whether or not Emily, Jessie’s former owner in Toy Story 2, is Andy’s Mom. After doing some heavy research into this popular fan theory and exploring everything from genetics to the timeline, I found an unexplained poster in the background of Toy Story 2 in Emily’s room during the “When She Loved Me” musical sequence.

The poster wasn’t in connection to the fan theory in question but opened up a whole other set of questions. the advertisement is for a fictional band called “The Lemurs” and a concert they are to hold on November 25th, 1999. At first glance, this sounds like a simple Easter egg referencing the release of the film in 1999, but Toy Story 2 was released on the 13th that month and later on the 24th nationally. This poster was predicting an event in the future in relation to the film’s release. Toy Story 1 was released on the 22nd. The other movies Pixar had at the time were Bug’s Life and upcoming Monsters Inc. and neither of them has any events associated with November 25th.

So what is so important about this date? What was supposed to happen on the 25th of November, the day after Toy Story 2 was released? Honest mistake? Deliberate intent? Who knows?

Walt Disney himself becomes the subject of this D file. The film mentions Walt Disney by name a couple of times and Goofy’s keys have a Walt Disney keychain on them. At first, this doesn’t seem like a big deal, just a fun Easter egg in the innocent air of ‘90s cartoons. This is where the plot thickens though.

In the TV Cartoon “House of Mouse”, we see a couple of episodes with Walt’s nephew, Roy D. Disney, making an appearance and interacting with the classic Disney characters, including Max and Goofy.

If Roy is a real person in relation to these characters, then Walt must be too. What did Walt do in this universe to make him such a big star? What do Disney characters do when they visit Disneyland? Is there a Disneyland? These questions just keep piling up and it all starts with a few frames of film that don’t even last a full 2 seconds.

Belle lives in a small, provincial town full of little people living their provincial life with nothing better to do than breathe and maybe attend the local tavern. A large contributor to the lack of innovation and the low social economics likely comes from a lack of education. Gaston says that “It’s not right for a woman to read” implying that Belle is the only woman who does read in the town and I think it’s safe to say that the men don’t read either (except maybe Gaston, but that’s a story for a different time). 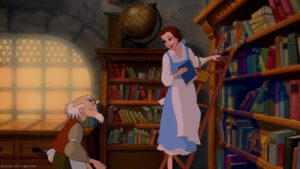 Three strikes against this shop! The local economy can’t support it, he gives books away for free and on loan, and it’s an anachronism. image owned by Walt Disney Studios.

So let’s talk about this bookstore then. At maximum, the bookkeeper gets three customers coming in (Belle, Maurice, and maybe Gaston). That’s not enough for him to support himself, especially

with the highly inflated price of eggs. When Belle walks into the store, she just assumes that she can borrow a book from the store which means that it’s a fairly regular occurrence that Belle gets to take books without payment for purchase or rent.

“What if it’s a library?” I hear you ask. I’d be inclined to agree, but public libraries didn’t exist, especially in towns that small, until the early 1900’s and later than that outside the United States. This bookstore should not exist. This problem was remedied quite nicely in the live action version, but the fact remains immortalized in the original.

What are some weird things you’ve found in Disney? Let’s talk about it in the comments and we can highlight them. Have a great day wherever you are and remember to keep wishing on stars. 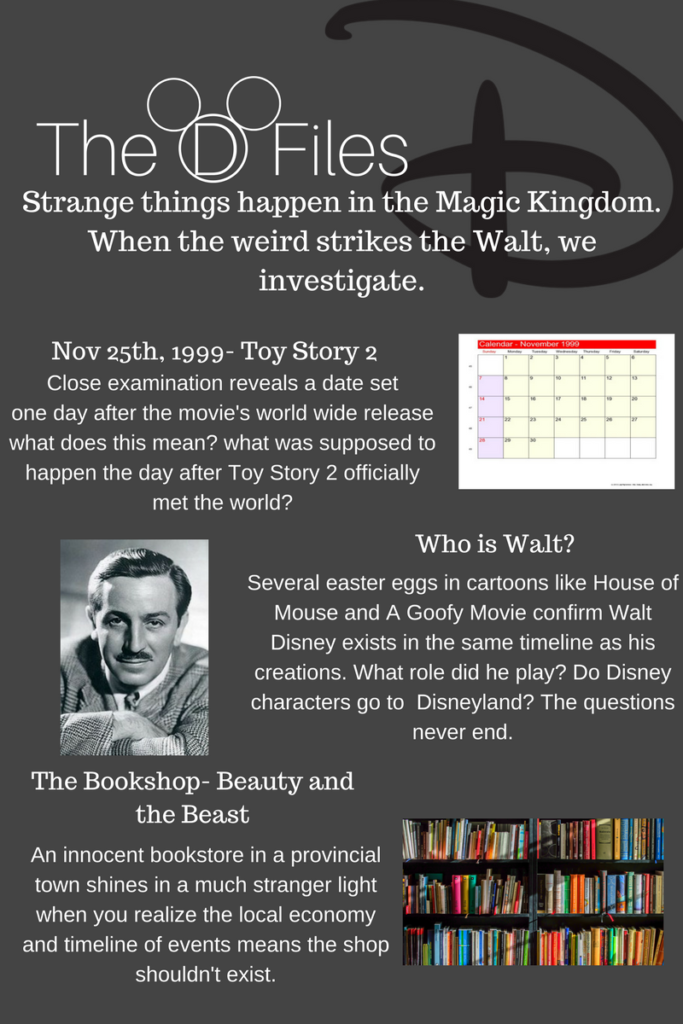