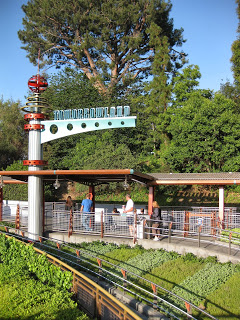 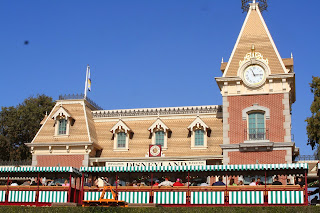 We are a train loving family. If there is a train somewhere, we will want to ride it and know all the facts about it. Walt Disney was also a huge fan of trains. He had his own trains set up in the backyard of his home, labeled the Carolwood Pacific. In all of the early and later artist renderings of the Disneyland Park, there was ALWAYS a train included. Walt himself built a special caboose for his wife Lillian to ride on at Disneyland. Trains are and have been an important part of Disneyland history.

From the moment guests enter the park, they are greeted with a view of the Main Street Train Station. There are, in fact, four train stations throughout Disneyland. If guests get on the train on Main Street, they can take a “Grand Circle Tour” of the park. This tour includes stops at the other four stations: New Orleans Square, Mickey’s Toontown and Tomorrowland. The great thing about the Disneyland Railroad is that it gives guests an overview of the park.

Diva Tip: Take the Grand Circle Railroad Tour on your first visit to Disneyland. It will give you a chance to see the park. Then you can go back and visit the places that looked interesting to you!

Walt Disney built the Disneyland Railroad to serve two purposes: To take guests to various places throughout the park and to keep guests from seeing the outside world. You will notice that the railroad sits up on berms so it is not in the way of other attractions, but it is also serves to make Disneyland really seem like it is in a different place than the outside world. There are four train stations and one trip through a diorama (the Grand Canyon and Primeval World). The train is slow going and quite pleasant for guests of all ages.

There are a total of five train engines, with most of the cars facing right to make it easier to see the park while the train is in motion. The latest of the engines, the Ward Kimball, was dedicated in June 2005.

Diva Tip: The Disneyland Railroad is a great attraction to go on in the middle of the day or in the evening, when your feet are tired!

While the train does not stop in every land, the engineers are great about letting you know which exits are closest to the attractions. For example, if you are stopping at the New Orleans station, the engineer will also let you know that this is the place to get off the train if you want to ride on Splash Mountain in Critter Country.

The scream factor for this ride is 1- and that is simply because of the dark tunnels of the Grand Canyon and Primeval World section of the ride. These tunnels are between the Tomorrowland and Main Street stations.

In general, wait times for the trains are under 10 minutes. On a normal day, there will be between two and three trains running. On busy days, the wait may be as long as 20 to 30 minutes and all five trains will be on the tracks. 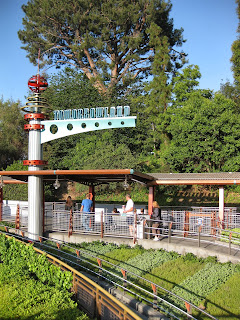 So how about some Disneyland Railroad trivia?

1) A model of the “Lilly Belle,” Walt Disney’s 1/8 scale model railroad is on display at the Main Street station.

2) The Grand Canyon diorama is the longest diorama in the world- measuring 306 feet long and 34 feet tall.

3) Some train engineers have nicknamed the T-Rex inside the Primeval World diorama Mr. Cuddles.

4) The train “C.K. Holliday” is a larger scale version of the Lilly Belle engine that was in Walt Disney’s backyard.

5) The C.K. Holliday and the E.P. Ripley were built at the Walt Disney Studio (from scratch) before Disneyland opened.

6) Signs on the Main Street station display the elevation of the park (138 feet above sea level) and the number of guests who have visited Disneyland since its 1955 opening (500 million).

7) When the trains first started running in the park, guests were given a railroad ticket that was stamped at every station.

8) At the New Orleans station, guests will hear a Morse code message being relayed. The message reads the opening day dedication speech.

9) The railroad is not the fastest way to travel through the park, unless there are fireworks or parades going on.