The Most Important Disney Movie Scenes in History 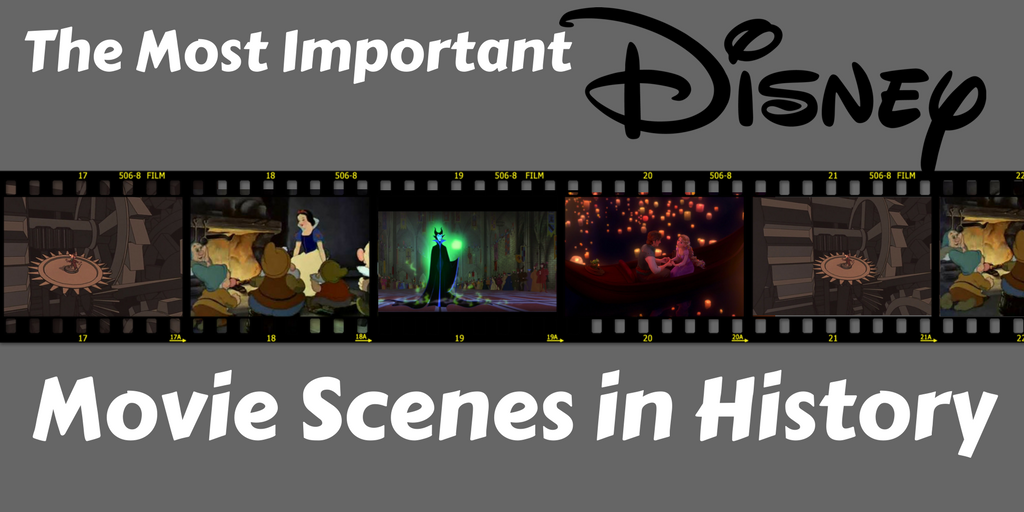 So I’m walking through a major book/ magazine store and I just finished going through the Graphic Novels and made my way over to the film magazines and I saw one that said something like “history’s 101 most important film scenes”. I pick it up and perused the magazine only to come away disappointed. Their choices were really strange and some of history’s arguably most important films, including every single Disney animated and live action feature before 2011, was omitted from the list.

The Walt Disney company has done so much for filmmaking and animation that I felt it was only appropriate to add my official unofficial list of Disney movie scenes that changed history.

This is not a “top favorite scenes” list, but scenes that actually changed the way Disney and others make their films based on my observations. If you’re looking for an influential movie for movie night or you’re a student of film that’s interested in how Disney changed the film-making scene, then this is a good list to start with!

Someday My Prince Will Come- Snow White and the Seven Dwarfs 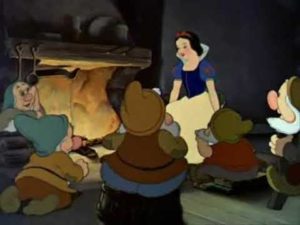 The brilliance of this scene isn’t what’s there, but what isn’t there. Image presented for promotional use.

When you watch this scene it looks a bit like nothing is happening and that is exactly why it’s so important. The original plan for this scene was to have a couple of cartoony stars dance in the background during this scene. Walt cut that idea in favor of having a simple, nonbusy scene to back the song. This placed greater emphasis on the song, giving it its place in the Disney music library, and set a pattern to how music should be handled in Disney films creating a balance between what you are hearing and what you are seeing.

This scene is contrasted by the song “Heigh Ho” which is very busy in comparison. Walt understood when it was time to give and time to hold back. These songs demonstrate how to do musical sequences correctly. If it’s been a while since you’ve seen Snow White, I suggest you watch it again and check out the balances during the songs.

If “Someday My Prince Will Come” established the Disney Style of balance, this scene where Cinderella’s torn dress transforms into her famous white/ blue dress cemented his animation technique. 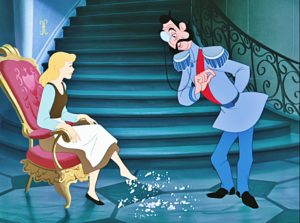 Notice the design of the film. Ultra realistic environments like this are, in part, what makes the dress transformation scene so fascinating. Image presented for promotional use.

The magic of this scene starts with the overall look of the movie. Cinderella has a unique aesthetic, full of beautiful swirls, bright and vibrant colors and textures on walls and floors that look ultra-realistic. Small details like reflections in the polished tile on the floor make a huge difference in how easily someone can insert themselves into the movie.

When the actual transformation happens, you’ll notice that the magic swirls have the same kind of round swirl to them, instantly placing them in the atmosphere. Placing the swirls center-screen puts your focus on it. Your eyes are forced to follow the swirls as they move backwards to how your mind naturally likes to follow things (rather than left-right up-down, the swirls move right-left down-up) grabbing your focus even more. The dress plumes from the downward falling sparkles and climaxes on-point with the music. Everything in this transformation is built to place emphasis on the action and leave a lasting impression and it certainly worked. Walt Disney has stated several times in his life that this is his favorite piece of animation. 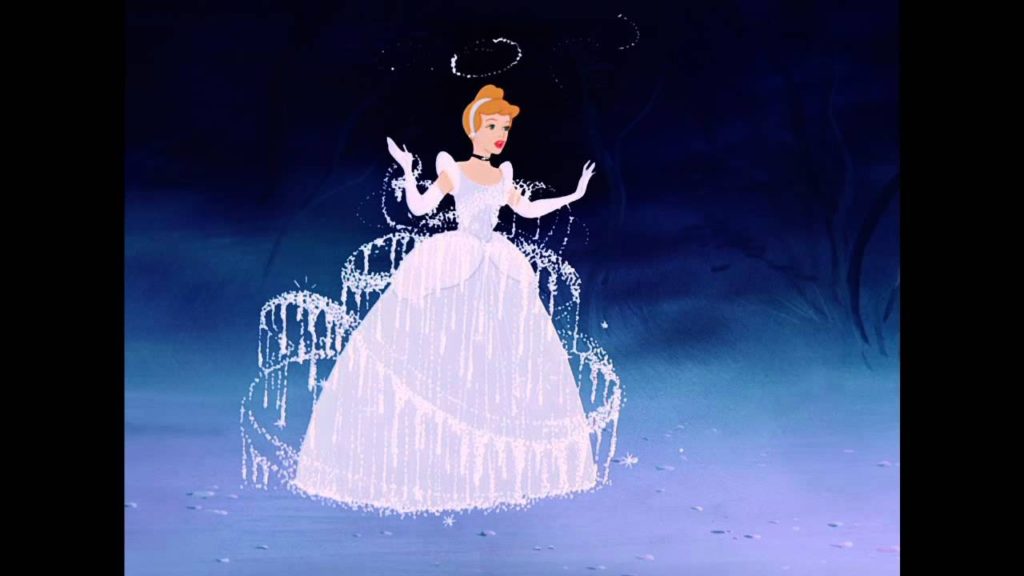 A perfect example of what Animation is capable of pulling off. Image presented for promotional use.

This example of Disney’s realism married with impossibility set a template for future films and you can find traces of this through all of Disney’s animated films even today (compare this to Elsa’s dress transformation). 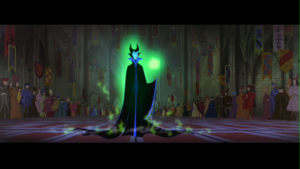 Note the contrast in colors and the sharp shapes that build up the characters. Certain choices were made to give the film a 14th-century feel. Image presented for promotional use.

First of all, I’d argue that Sleeping Beauty is Walt Disney Productions most beautiful movie. The non-organic shapes in the background contrasting heavily with the organic movements of the characters which then contrasted with the sharp and defined angles that build up most of the characters. The grand color spectrum and the choice to animate the film in cinemascope also contribute to the unique nature of the movie and the opening of the movie shows that off perfectly.  The grand parade in all of its bright colors and Maleficents entrance casting a dark and evil shadow over everything creating a real feeling of dread when this brand new and scary villain first appears.

Sometimes filmmakers are just showing off and this is one of those instances.

Odd enough, Sleeping Beauty did not gain the financial ground that the company was hoping for and it took years for Disney to adapt another fairy tale princess. Even so, this film is absolutely beautiful. If you want to see top-notch art and filmmaking, then this is a great choice.

Fun Fact: Maleficent is a completely original character created by Walt Disney. She is the only character in Sleeping Beauty that doesn’t have a perfect counterpart in the original fairy tale. The original film concept also had 7 Good Fairies but this was changed in part to separate the Good Fairies from the Dwarfs. 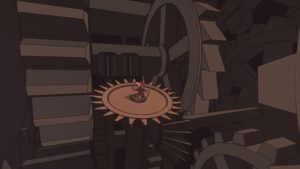 Using computers allowed the scene to be a lot more advanced and have more moving parts than 2D hand-drawn animation. Image presented for promotional use

In the years prior to this film, Disney animation fell on some hard times with the loss of Walt Disney. There were questions if the animation studio could really continue without guidance from the founder and there was serious talk about closing the animation studio and outsourcing further animated features. All of these decisions rested on a Hail Mary pass with The Great Mouse Detective. It had a small budget and an even smaller team to work the movie, but there was one scene that changed everything and that’s the clock tower battle.

While there was talk in the studio, no one approved trying to put CGI animation into a feature length animated film like this. The mentality was that if it wasn’t cheaper, then it wasn’t an option. That’s when this new generation of creators decided to take a hint from the life of Walt Disney and try it anyway.

Up until the clock scene, the movie was pretty simple. The story was easy to follow, characters easy to understand, the design was familiar enough at this point, and then boom. History made. The practice of placing CGI animation into a 2D world changed the way people viewed Disney’s animation and The Great Mouse Detective was the first film in years to make a reasonable profit for Disney. A difficult and risky idea paid off. It also paid off The Little Mermaid and opened up the Disney Renaissance.

The biggest thing that this scene did was prove that Disney Animation would be able to continue to innovate and entertain without Walt Disney’s presence. Still, there’s one more movie that guaranteed the studio would last forever.

I See The Light- Tangled

In 2006, Disney re-organized the head of the company and placed John Lassiter (director of Toy Story and president of Pixar) as the new head of animation at both Disney and Pixar studios. During this time, shareholder meetings were filled with questions about whether to cancel Disney Animation and move all features over to the much more successful and consistent Pixar Studios. John Lassiter said “No” and started getting to work. Princess and the Frog represented a possible turning point, but it was Tangled that proved that Disney Animation was not going away anytime soon.

Tangled was Disney’s first foray into CGI animation since Dinosaur but it succeeded in ways that no one could have imagined at the time. The one scene that proved Disney could use this new technology sufficiently was “I See The Light”. Note how the background scenery exists at the beginning of the song but as it moves forward towards the climax, the background grows dimmer. The water under the boat reflects the hundreds of lanterns in the sky, isolating Eugene and Rapunzel as they learn nothing else in the world matters to either of them, framed by the beautiful paper lanterns of the kingdom wishing the return of their princess who is only just now finding herself. 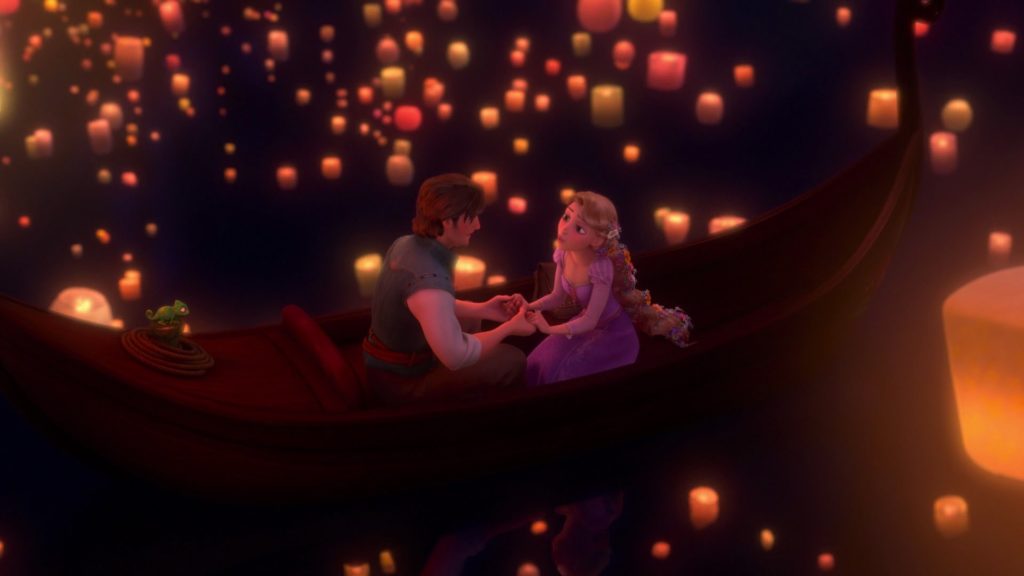 CGI animation makes experiences possible that otherwise would have been shelved. this beautiful reflection scene in Tangled is an example of that. Image presented for promotional use.

You know the rest of the story now. Disney Animation kills it at the box office with every new release, their content is full of variety, and we keep getting beautiful and amazing scenes, all thanks to this scene in Tangled.

So there you go. The most important scenes in Disney History. What movie scenes have made the biggest difference in your life? Let’s talk about it in the comments, thanks for checking us out on Facebook and Twitter, and remember to always keep wishing on stars… 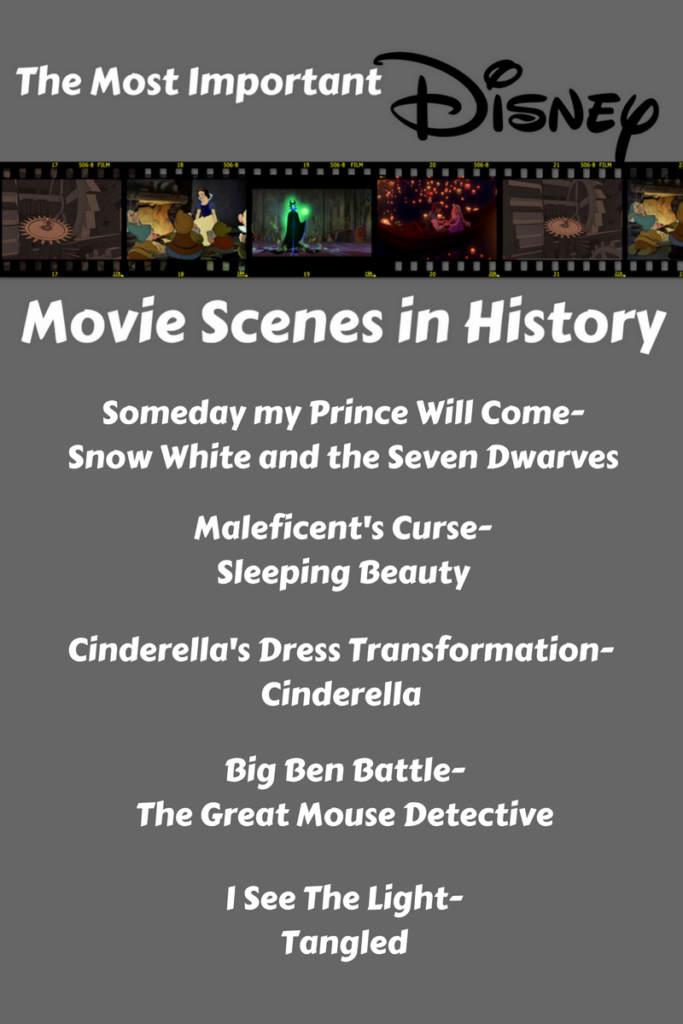