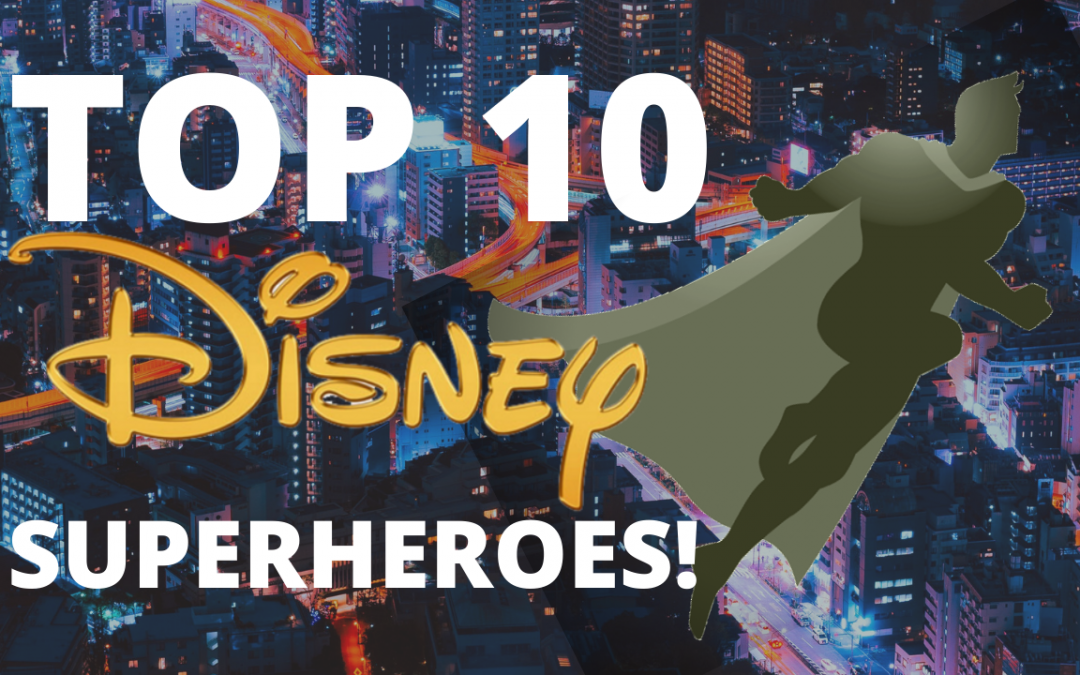 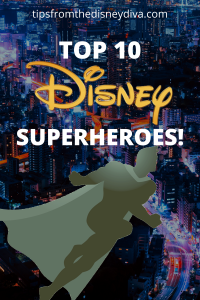 I can think of at least 4 Pinterest boards I could save this to. What about you?

Summertime means superheroes. Now usually this means that I’m talking about Marvel characters or the Justice League or something like that but here’s a fun fact- Disney has plenty of their own superheroes in house. So now seems like a good time to go ahead and countdown my favorite superheroes from the House of Mouse.

Darkwing is better than GizmoDuck.

This Canine Crusader was the result of genetic experiments that granted him superpowers! In a TV show. In reality, Bolt is an actor raised as a puppy to believe the show he was a part of was real. In the end, Bolt learned that superpowers were not the most important thing a hero could have, but it’s their heroic deeds. How sweet. I suppose.

Phineas and Ferb built the most dangerous skateboard ramp ever. So dangerous that they can’t use it. (and that’s compared to their usual hijinks).

So to use their skateboard ramp, Phineas and Ferb built a mechanical suit with all of the safety equipment needed for dangerous skateboarding adventures. Like a grappling hook and lasers and rockets and a titanium alloy shell! But after rescuing a geek from a tree and making headlines in the early-mid morning edition newspaper, Their destiny as Disney Superheroes was sealed.

While being a parody of superhero tropes, I’m impressed with how good this episode actually is. Check it out if you have time. On Disney+ it’s listed as Season 2 Episode 28.

Back in the golden age of heroes, several accidents and a vote of no confidence with superheroes forced the government to ban all superhero activity. But when the city is in danger, someone has to stand up and that someone is Mr. Incredible, Elastigirl, Violet and Dash: The Incredibles! Their actions lifted the ban on superheroes and The Incredibles have become the resident hero team of Metroville. It’s the classic family story but with a superhero twist!

Odd how Pixar made a better Fantastic Four movie than anyone else has, huh?

There’s not a good way to summarize Mighty Ducks without sounding crazy, but here goes. 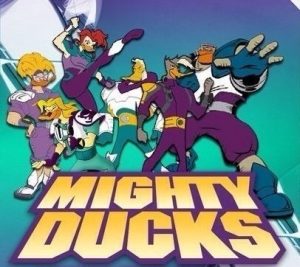 Hmm… White, muted evergreen, Grape purple… yep. It looks like a cup. must be from the 90s.

There’s a planet in another dimension called Puckworld where everyone is a duck, and everyone loves hockey. It was a peaceful planet until the evil Saurian Empire, lead by the mastermind Dragaunus, attack the planet for its resources and sentenced all the ducks to slavery. A small resistance group was able to take the main base but they were pursued through a dimensional portal by Dragaunus and his top lieutenants. The portal dumped both onto the planet Earth. Now the Mighty Ducks use their advanced alien technology to first seek out Dragaunus and then find a way home. Also, they play a lot of hockey.

It’s weird, it’s very 90s, I used to stay up way too late to watch it on Toon Disney and I still like it. But I do admit it’s not very… what’s the word?… Humble? Relaxed? Conservative? But it’s the stuff of comic books. It’s Power Rangers meets Star Trek meets X-Men but it’s Disney!

He’s a much more compelling character in the DuckTales reboot and he’s more than just a “let’s laugh at the stupid character”. In the new Ducktales, GizmoDuck actually presents a deep superhero story. He wants to be a hero but he struggles along the way with making the right choices. Questions like if he should monetize his image, or if he needs to quit his job. Does Scrooge own GizmoDuck? No one’s been a superhero before him and so it’s up to GizmoDuck to essentially blaze the trail.

GizmoDuck became compelling, but Darkwing is better than GizmoDuck.

I mean, they’re sort of Disney Superheroes, but they were created initially by Marvel. Regardless, Disney’s version of the team and characters breathed a lot of life into the story, turning them from a 4-issue mini-series into a full-fledged team! You look at the old Marvel team and compare them to the Disney Superheroes and they’re completely different characters.

You all know the movie- Hiro Hamada’s brother is trapped in a fire and dies. This sends Hiro on a tumultuous journey to get revenge on his brother’s killer. Hiro turns his robot and his friends into a team of crime-fighting superheroes and together they fight crime and become the in-residence superheroes of San Fransokio. they beat the snot out of bad guys. Along the way, Fall Out Boy sings a song.

There’s a lot of places to get Big Hero 6 stories from a movie, a tv series, and even some comic books. 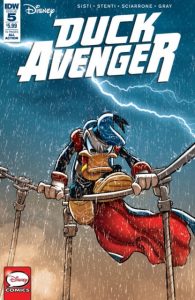 Who is this mysterious vigilante? He looks nothing like any Disney character I’ve ever seen!

There’s a lot of ducks that become Disney superheroes, aren’t there.

After constant frustrations with his overbearing Uncle Scrooge and his infuriatingly lucky cousin Gladstone, Donald decides to get his revenge. He finds a diary in an old villa that belonged to a master criminal and as the Duck Avenger, Donald rights all the wrongs done to his life, often in a villainous manner.

Realizing villainy will only take him so far, The Duck Avenger was reborn as a dark symbol of justice. Now he uses the instructions from the diary and his various gadgets to avenge the wrongs done on the city of Duckburg!

The Duck Avenger is a story more prominently used in the Italian Donald Duck comics though several stories have been translated for international audiences recently by IDW publishing. This is an aspect of Donald that is just obscure enough to make you sound smart when you bring it up, so your welcome! Now if he’ll just show up in Ducktales then all will be peachy.

Sent to earth from another world, young Hercules grew up on a farm learning about his immense strength and god-like powers. After a particularly dis-enchanting event where Herc’s powers failed to stop a disaster, Hercules traveled off to Zeus’ temple (A fortress of solitude if you will) where he learned about his origins and his importance to humanity. And after a training montage, we then find Hercules as the hero of Thebes.

So I really like Superman. He’s my favorite superhero generally speaking and Hercules is basically a remake of the old Superman movie with a bunch of greek jokes. So yeah. He gets the number two spot on my list of Disney Superheroes. 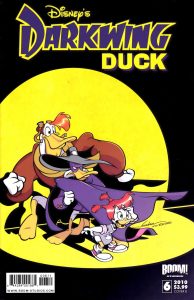 Darkwing, being a superhero parody, can make a tongue-in-cheek reference like this comic cover while giving a critical and unique look at superhero tropes.

He is the terror that flaps in the night! He is the batteries that were not included! The overstuffed burrito that falls in the lap of crime! The busted hyperdrive in the spaceship of villainy! The pineapple on the pizza of justice! He’s Darkwing Duck!

Darkwing Duck started as a parody of the then-popular Batman The Animated Series and a few concepts from the Ducktales universe. The show itself is a fun mix of superhero action and slapstick comedy while the heart of the show is Darkwing’s struggle between being a famous hero or doing the right thing regardless of public opinion.

But being a parody of other superheroes also means that Darkwing is one of the most versatile characters out there. There’s a spy element (Nick Fury), alternate dimensions and villains (The Flash), a plethora of themed gadgets and vehicles (Batman), and a long-time rivalry and frustration with GizmoDuck (Batman v Superman). All of this superhero action is wrapped in a sweet story about a single father doing his best for his little girl, a premise unique to Darkwing.

Of course what makes Darkwing so endearing is the supporting cast. His best friend and pilot Launchpad McQuack, His adopted daughter Gosling, HIs complicated relationship with sorceress Morgana Macawber, and the plethora of villains like Quackerjack (a combination of The Joker, and Toy Man from DC Comics) and Negaduck (an alternate universe evil Darkwing)!

Darkwing Duck only became more interesting with the Ducktales Reboot. In that, Drake Mallard is an actor who played Darkwing Duck in a failed movie reboot and, with the help of Launchpad McQuack, he chose to do his superhero work for real as the real-life Darkwing. Because as he points out several times: He is better than GizmoDuck. 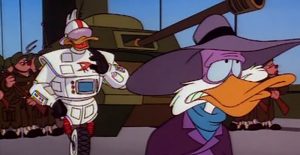 No, really. It’s like a character theme in the show. Darkwing is better than GizmoDuck. I’m not just hounding on GizmoDuck. Well, maybe a little.

Tell me who your favorite Disney Superhero is in the comments. Trust me, I love talking about this kind of thing. And hey, until next time, remember to keep wishing on stars.