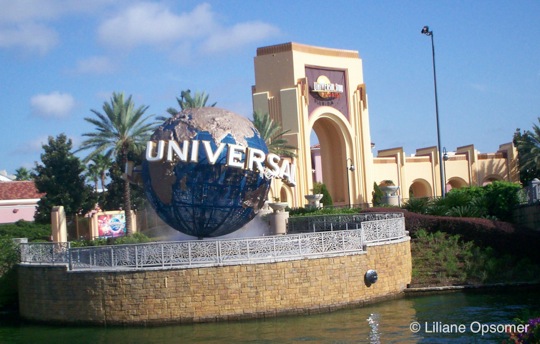 Since 1992, The Unofficial Guide to Walt Disney World has included a small section in the back of their guide for Universal Orlando as well as Wet ‘n Wild and Sea World. A few years ago, when my husband bought me, my very first The Unofficial Guide to Walt Disney World (it was a romantic and sentimental gift, but that’s another story), I noticed the Universal section. It seemed to me like an afterthought. Although I love Universal films,  the Universal Theme Parks didn’t appeal to me and I’m guessing this is the case for many who visited Orlando. For vacationers across the globe, Walt Disney World was the “world” when visiting Florida. In recent years however, Universal has upped it’s theme park game, so much so, that according to this guide book; Attractions, Dining, Resort Accommodations and overall Themed-lands of Universal Orlando have been on par and in many areas, even surpassed Walt Disney World. And of course, with Harry Potter literally taking the “universe” by storm, Universal Orlando is definitely no longer an afterthought!

First, you may be wondering why they are called “Unofficial” guides. They are “Unofficial” because they are not affiliated in any way to the Walt Disney Company or to Universal Orlando. The research team are independent writers, much like our team of writers here at Tips from the Disney Diva and Devos. By not being affiliated with the above companies, the Unofficial Guide team is able to give you HONEST reviews. If they don’t like something, they will tell you. Their honesty will help you get the most of your vacation, with their thorough ratings on attractions, hotels and restaurants as well as detailing what to avoid. Their goal is to help visitors make the best decisions for their vacation.

Fun Fact: Author Seth Kubersky was a former employee of Universal Orlando’s entertainment department and has been living in Orlando since 1996.

Before you read any further, let’s take a look at who this guide may not  appeal to:

Now, let’s take a look at why you would want to own a copy of The Unofficial Guide to Universal Orlando:

I’m a bookworm, but I have to admit something, I have never read a Harry Potter book by J. K. Rowling or seen any of the Harry Potter movies in it’s entirety (I know, it’s blasphemous!). If you are a true “muggle” (no idea what this is)  fan, then  The Unofficial Guide to Universal Orlando is right up your ‘Diagon Alley’. It has everything you need to know to make the most of your Harry Potter experience; from why you need a “Park to Park” pass when riding ‘Hogwarts Express’ to what phenomenon in ‘The Wizarding World of Harry Potter’ The Unofficial Series Guide staff have never seen in the decades of  covering theme parks.  You will get such detailed vacations tips like, the best line to wait for a ‘Butterbeer’,  to the FIVE page (yes, 5 page) description of the “Super-Headliner” attraction, ‘Harry Potter and the Forbidden Journey’. The Castle is said to be even more incredible than Cindy’s and under the stern and careful direction of J.K. Rowling herself, according to The Unofficial Guide to Universal Orlando, you will be completely immersed with everything Harry Potter.  After reading all about Harry Potter in this guide, I might become a fan myself and take their suggestion on page 22.

You are a Walt Disney World FAN but want to try Universal Orlando.

You are a Foodie.

The word ‘Foodie’ seems to get tossed around more than a garden salad, but if you love to eat, The Unofficial Guide Series have amazing restaurant and counter service (or quick service) reviews. I never read the food section of The Unofficial Guides hungry! Under the direction of  Derek Burgan, The Unofficial Guide Series’  “Universal food consigliere”, they give a very honest and descriptive rating system for the over hundreds of restaurants and eateries in Universal Orlando including inside the resorts and in CityWalk.  With this guide you will find out such things as; which restaurant is best to order appetizers, drinks and desserts but not entrées , how “Green Eggs and Ham” really taste like,  which restaurant is the BEST THEMED they have ever seen, which Italian restaurant  is the best table service on Universal Property and oh my goodness I have to try ‘Cowfish’! They also give you tips on making dining reservations, dress code and noting dietary or allergy restrictions.

The comparisons do not only stop at Walt Disney World! Here is just a small snippet of what you will find out about Universal Orlando through The Unofficial Guide to Universal Orlando‘s research team:

Canadian Diva Suggestion: Cut out which touring plan page is best for you, laminate it and carry a dry erase marker with you to map out your touring plan while on vacation.

If you are a fan of Shrek, The Simpsons (Television’s longest running sitcom, which I found out in this book), Transformers, Dr. Seuss, Jurassic Park, Men in Black, Hop (I disagree with them on page 275), Terminator as well as many other Universal films, television, cartoons and the Golden Age of Hollywood, you will love to visit the many attractions, shows and parades based on the above at Universal Orlando. And our family is super excited about the proposed Nintendo themed land, which I found out about in this book! 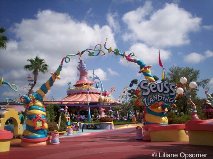 More fun facts: From reading this guide, I found out that I  will probably get more wet than visiting Niagara Falls, as Universal Orlando has a thing for water, they teach you on how to prepare for this!! And you can have fun reading this book while playing  a drinking game, with the amount of times they say “Immersive”, ‘Bottleneck”and ‘queue” (on page 46, you receive a grammar lesson on the word “queue”)

Warning: if you have a sense of humor, do NOT drink coffee or have a glass of water while reading any of The Unofficial Guide Series. Don’t let their sterile appearance fool you because some of the comments, descriptions,  “Author’s Ratings” as well as witty sarcasm will make you laugh out loud! I would get an Unofficial Guide Series book just to have a good chuckle on it’s own, they are that funny! Their twitter account and articles on their site touringplans.com is informative with many of their trademark humor mixed in.

Some of my favorite humorous moments (among many):

I also liked the “reader’s comments” seen in  light blue italics throughout. The Unofficial Series Guide team have surveyed over 47,000 Universal Orlando vacationers and included many of their comments as well as feedback in the Unofficial Guide Series Books. Not only do the feedback from readers include great tips, some of the comments made, can be more funny and witty than The Unofficial Guide Series team themselves. My all time favorite is the last reader’s comment of the book.

In conclusion, The Unofficial Guide to Orlando is a wonderful wealth of entertaining information. I really enjoyed reading this book (many times actually) and it made me more excited to visit Universal Orlando as well as guide me on the best way to avoid stress and  have the perfect vacation at Universal Orlando.

And don’t forget, we all need help planning our vacation and a Vacation Specialist will help you plan your trip as well as SAVE YOU MONEY. With this guide, our own site and a Travel Specialist like our favorite Patricia Payne, she can help you make the most of your Florida Destination – yes, she can plan your  Universal Orlando trip and of course your Walt Disney World vacation too!

Are you a DVC (Disney Vacation Club) owner, and want to sell some of your points? Check out DVC Resale Market! You could perhaps use that money to stay at one of the many Universal Orlando resorts!  The Unofficial Guide to Universal Orlando strongly suggests to stay on Universal Orlando Property when visiting there.

Do you like to dress your children up as various characters at the Theme Parks (I sure do)? Get well made and comfortable costumes with high quality material at Mom Approved Costumes and check out our own special discount code: DISDIVA !

Copyrights of all the Photographs in this article belong to Liliane Opsomer and are being used with her permission.