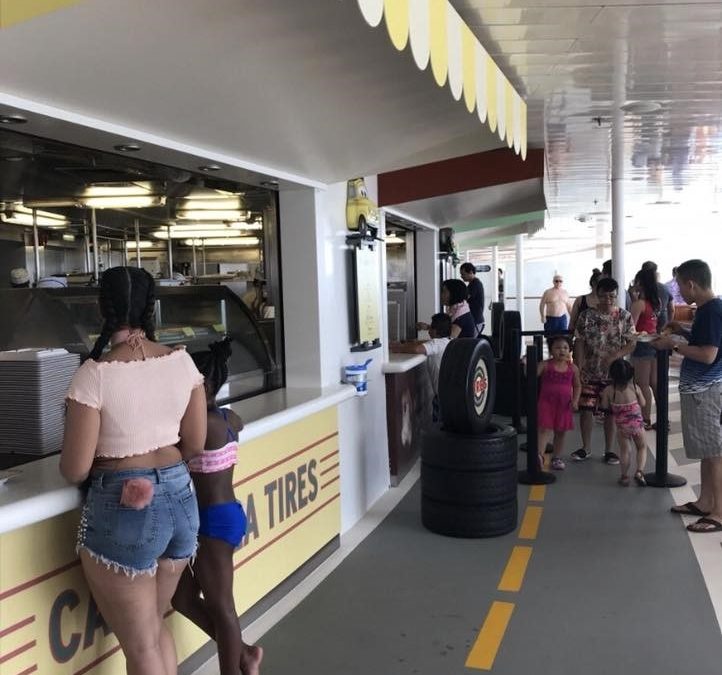 Disney Cruise Line is (rightfully) famous for its rotational dining. If you’re not familiar with this concept, each family is assigned to eat at one of three, lavishly themed dining rooms. You then move to a different dining room each night, and your lovely wait staff moves along with you, so they get to know you and your dining preferences or allergy needs. However, sitting down for a full meal that can last for a couple of hours is not for everyone. If you have an itinerary that’s jam-packed with lots of ports, like we just did for our Mediterranean cruise, then you might not even make it back to the ship in time to eat at your assigned seating. Fortunately, Disney has you covered. No one should ever go hungry on a DCL cruise, because there are plenty of options out there for you to choose from. 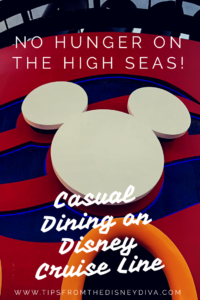 While each ship in the fleet has room service as well as signature adults-only dining options like Palo or Remy available, in this article I’m going to concentrate on the casual options out there. 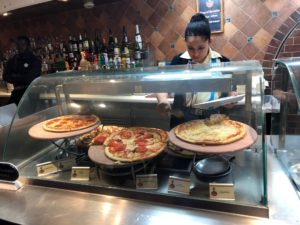 Pinocchio’s Pizzeria on the Disney Magic serves up pizza all day (and evening!) long

Pinocchio’s Pizzeria, as you might guess, features slices of pizza. They always have cheese and pepperoni, but there are other varieties that rotate through, including bbq chicken, veggie, mushroom, and so on. I am personally not a fan of the pizza here (especially when compared to the thin crust ones they serve during the Palo brunch!), but my kids seem to eat about a zillion slices every time we cruise.

Pete’s Boiler Bites has one window called the Duck-In Diner with your usual fast food fare: hamburger, cheeseburger, hot dog, chicken tenders, French fries, but there are also fish burgers, veggie burgers and there might be the occasional special like pulled pork. 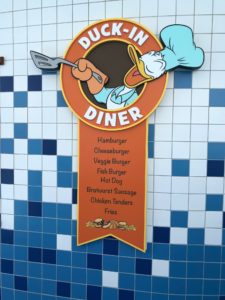 There’s another window that offers more unusual fare: gyros/shawarmas with hummus, baba ghanoush and other toppings available. Originally this was only found on the Magic, but I have read that it is also offered on the Wonder. I really like this option, and in the afternoons, we would often get a gyro with a plate of fries and a side of hummus to dip them in.

Tip: It’s hard to balance lots of drinks, especially if you want to take them back to your stateroom. We save a cardboard beverage tray from a fast food restaurant or Starbucks and bring that aboard with us so we can tote multiple cups with ease. Disney does not have trays or carriers available on deck.

The third on deck dining option is Daisy’s De-lites, and this offers lighter, healthier fare, like sandwiches, wraps, salads, and fruit. Note that many of the sandwiches are pre-made and don’t allow for much customization. The lineup also changes daily. Daisy’s is often open in the morning, featuring items like yogurt, oatmeal and croissants, and can be good place to pick up something quickly if you are heading out on a shore excursion.

When I went on a Halloween on the High Seas cruise on the Magic this past fall, they had added more choices at Daisy’s De-lites, and the whole left hand side was dedicated to Build a Bowl fare. There was quinoa, rice, and chicken ramen and many toppings to pick from. This was an amazing, healthy option that I chose for lunch every day. I was very disappointed to find that it was not on the Dream when I sailed in November. 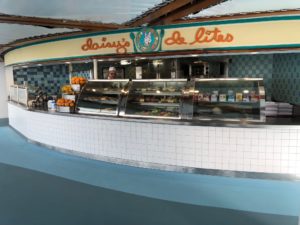 Daisy’s De Lites on the Disney Magic has lighter, healthier fare for breakfast (pictured) and other meals

Both of these larger ships feature Flo’s Café, which includes a trio of Cars-inspired casual eateries. There’s Luigi’s Pizza, with the same sort of line up as the pizzeria on the classic ships.

The “healthy” option on the newer ships is Fillmore’s Favorites. This eatery has healthier items like sandwiches, paninis, wraps, salads, and fruit.

A Buffet Every Day

All four ships have a dining venue that is buffet style and open most days during breakfast and lunch hours. My girls absolutely love Cabanas, the buffet venue that is found on deck 9 on both the Magic and Wonder and deck 11 on the Fantasy and Dream.

Breakfast is fairly standard, and includes staples like eggs, potatoes, meats, breads, cereals, Danish, fruit, yogurt, and an omelet station. And who can say “no” to a Mickey waffle? At lunch there are different foods featured – one day it might be seafood, another day it might be Asian-inspired, another day it could be Italian. There will always be crowd favorites, though, like mac and cheese and chicken tenders. 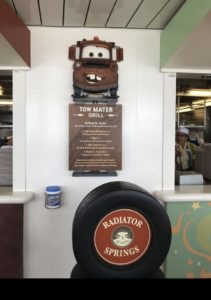 Disney buffets can please even the pickiest of eaters. My younger daughter was happy that there were multiple vegetarian options, including a salad bar and at least one or two main entrees. And of course, lots of desserts to choose from.

Tip: Be sure to consult your daily Navigator or Navigator App for the operating hours of all these eateries. While the drink station is open 24 hours a day, other venues may change hours depending on port times and itineraries. 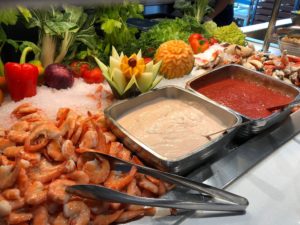 The buffet can get crowded during peak periods, like mornings when everyone is trying to get ready to go ashore. Even though Disney has tried its best to minimize crowds by having two different lines and multiple food stations, people still get jammed up at the very beginning of the buffet. It’s not rude, in my opinion, to go ahead and move past people if you know you want to get to the salad bar or the desserts that are at the opposite end.

There’s lots of indoor seating, but you can also sit out on the deck that is at the very aft (back) of the ship. You can even carry your tray out of the restaurant entirely and sit at one of the many tables that are spread out on deck.

One thing to note is that the buffet is not always available in the evening hours. Sometimes at night Cabanas turns into a “sit down” type restaurant featuring a limited menu from the rotational dining rooms.

When You’re Thirsty at Midnight 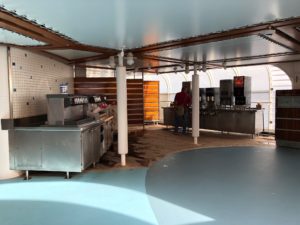 Each ship features a 24 hour beverage station like this one on the Magic.

One of the many things that sets Disney apart from other cruise lines is that there is a 24-hour beverage station on deck where you can get soft drinks, coffee, tea, milk, water, and hot cocoa. Some other cruise lines have an upcharge for sodas, but Disney Cruise Line does not. Note that sodas are free on deck, and in the rotational dining rooms, but incur an additional charge when ordered at a bar or lounge or from room service.

Tip: Drink cups are on the small side. Many people prefer to bring Tervis tumblers or refillable resort mugs so that they don’t have to keep going back to the drink station. For hygiene reasons, though, DCL does want you to refill your mug using one of the disposable cups.

Note that the cruise ships are phasing out the use of straws. My daughters would put their sodas in coffee cups with a “sipper” lid.

We All Scream for Eye Scream

I’ve got two words for you: soft serve. 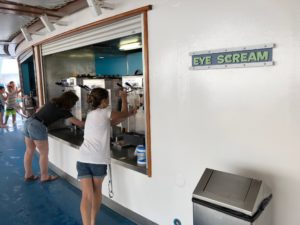 The Eye Scream soft serve ice cream station is a popular place for many cruisers.

Yep, Disney Cruise Line has free soft serve ice cream, on deck, that you can get pretty much any time you want. The soft serve vending station is called Eye Scream on all four ships.

They typically have vanilla, chocolate, and swirl, but other flavors rotate in on a daily basis. On our recent cruise, pineapple, banana, strawberry, coconut, and coconut pineapple made an appearance.

My daughters were thrilled that sugar cones seem to have replaced cake cones.

(Note that the Magic, Fantasy, and Dream all have a venue called Frozone that serves smoothies, but these are an additional charge.)

All of the venues I’ve described above are included in your cruise fare and give you flexibility if you have time constraints, young children, or just don’t feel like sitting down to a full meal. There really is no need to ever go hungry on a Disney Cruise ship!

Need help planning your Disney Cruise? Want to head to Disney World? Contact Patricia at All For Dreams Travel for FREE, expert help with all your Disney travel plans.

*Feature image is on the Disney Dream, courtesy of Pixie Hollow Diva