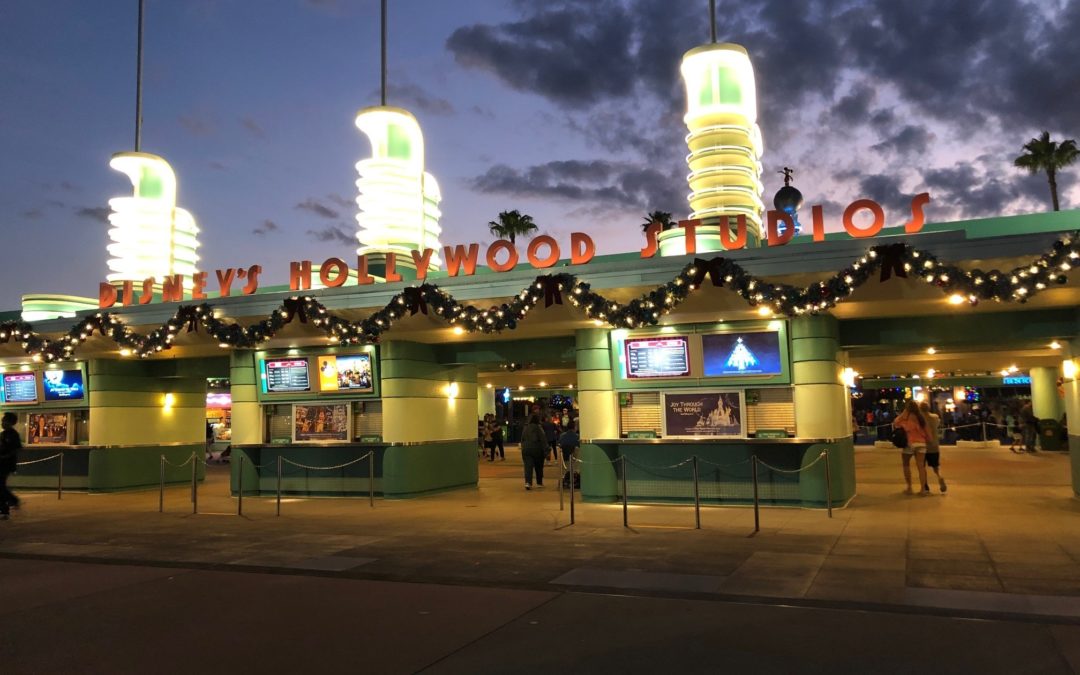 Sunset Season’s Greetings and Jingle Bell, Jingle Bam are two holiday shows at Disney’s Hollywood Studios. New in 2016, both of these shows feature projection effects and take place nightly during the park’s “Flurry of Fun” event. This year, these shows take place between November 8, 2018 and stay around until January 6, 2019. 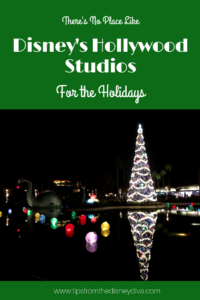 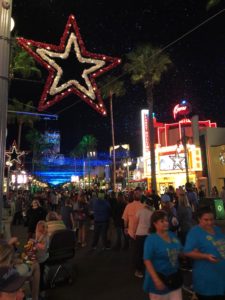 Sunset Season’s Greetings can be enjoyed all along Sunset Boulevard

We had just a couple of hours to spare in this park, but not to worry: Sunset Season’s Greetings shows continuously along Sunset Boulevard from dusk until park close. While it’s no replacement for the Osborne Family Lights that were once a Hollywood Studios staple, it is still very lovely and gets you into the holiday spirit with music, projections, laser effects and even some “snow.”

The Sunset Season’s Greetings show centers around four vignettes that are shown on large LED screens: Mickey and Minnie reminiscing about an old-fashioned Christmas, Toy Story characters wondering about new holiday toys, the Swedish chef babbling unintelligibly about gingerbread houses, and Olaf pining over a holiday wish. The Twilight Zone Tower of Terror serves as a backdrop for the projections, and shifts from snowflakes to candlelit windows to wrapped presents over the course of the presentation.

While I did like the projections, the most magical scenes for me were when the red and green lasers lit up the falling snowflakes along the boulevard.

Jingle Bell, Jingle Bam occurs once each night, generally about half an hour after park close (check the times online before you go). Santa is missing and Wayne and Lanny from ABC’s popular Prep and Landing are searching high and low for him. As they search for Kris Kringle, the rooftops and buildings come alive with projections, lasers, fireworks, and other effects. 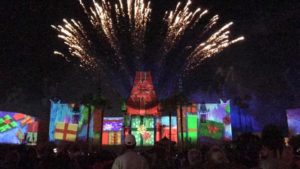 Jingle Bell, Jingle Bam is projected on the front of the Chinese Theater. Photo courtesy of Disney Magic Diva

While Sunset Season’s Greetings occurs along Sunset Boulevard facing toward the Twilight Zone Tower of Terror, Grauman’s Chinese Theater is the setting for Jingle Bell, Jingle Bam’s projections and pyrotechnics. This area is kind of problematic as it is rather small and if you are to one side or the other, you risk having your view blocked by trees, projection towers, or even the construction wall for Mickey and Minnie’s Runaway Railway. On the Saturday night we attended, however, we were able to walk up about 15 minutes before show time and easily find a spot just to the left of center.

Immediately before the holiday show, there’s the “regular” showing of Disney Movie Magic, a projection show that is shown year-round and features scenes from classic Disney movies. 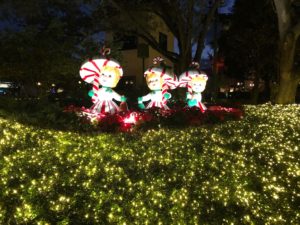 Vintage-style Christmas ornaments are featured as part of the holiday decor.

Jingle Bell, Jingle Bam is enjoyable and features holiday music and scenes from Disney favorites including Mickey’s Christmas Carol, Nightmare Before Christmas, Beauty and the Beast, Bambi, Inside Out, and many others. Strangely, even though The Nutcracker and the Four Realms was recently released, there didn’t seem to be any scenes from this movie. 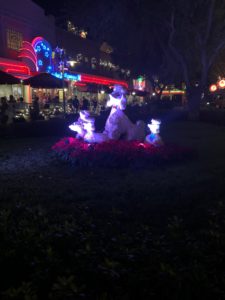 There are many other holiday experiences elsewhere in the park: there are new decorations in quite a few places, including Toy Story Land and Echo Lake, a Jingle Bell, Jingle Bam dessert party, and Minnie’s seasonal Holiday Dine at Hollywood & Vine. You can visit with Santa until December 24 and then Goofy takes over until December 31.

Some have called them creepy, but I liked the vintage look of the new decorations near Echo Lake and in front of the Brown Derby. We wandered around the lake and admired Gertie the Dinosaur’s Christmas get up and the floating ornaments. 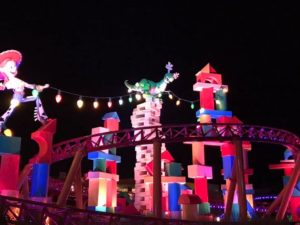 One thing that continues to disappoint in this park is that many of the food venues close much earlier than park close. So if you don’t have a Fastpass+ and are simply wandering around admiring the decorations and waiting for the show to begin, you can’t get a bite to eat, or in this case a seasonal treat to enjoy. I got to Backlot Express just as they closed, so was unable to sample holiday goodies like the Frosted Gingerbread Martini or the Chocolate Chestnut Cone.

Diva Tip: If there are seasonal goodies you’re interested in, get them when you see them. Many quick service restaurants and kiosks close well before park closing time.

We did get to enjoy a Hot Chocolate Flight ($12) at Fairfax Fare while watching the Sunset Season’s Greetings. The cherry bourbon one was the clear favorite. 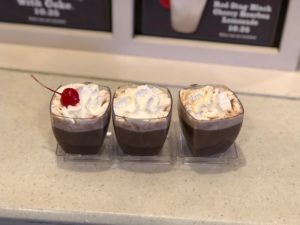 Hot Chocolate Flight, the bourbon one is on the left.

There’s still time to plan a holiday visit to Walt Disney World! Get FREE help and a FREE quote from Patricia at All For Dreams Travel today!