They Do Exist! Dapper Dans at Walt Disney World 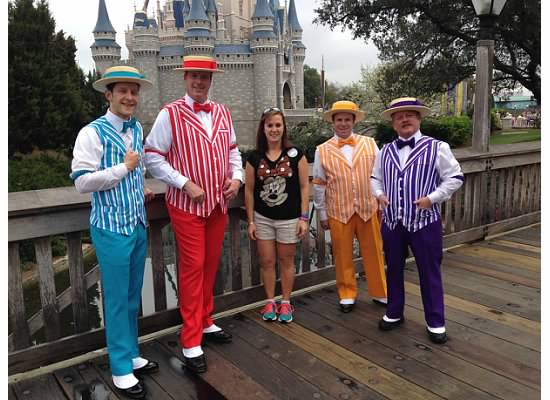 I had been to Disney six times, and I still had not seen them.  I’d heard about them and they had become somewhat like Bigfoot for me.  I knew they must exist because I had heard seemingly intelligent, sane people tell me they’d seen them.  But, I was seriously beginning to have my doubts.  Now, I must admit, I knew the one place that I could definitely find them and had never been there (the front of the park by the barber shop)–but part of me just wanted to stumble across them one day.  Well, that day finally came.  In February of this year, my husband and I decided to take an adults-only trip to Disney (something I highly recommend trying if your kids have been to Disney).  We were leaving Adventureland and heading back towards Main Street.  I looked up and there they were in all their pin-stripe glory–THE DAPPER DANS.  I am sure I totally freaked them out as I ran at them like a teenage girl at a One Direction concert (or for my generation New Kids on the Block), but I just couldn’t help myself. 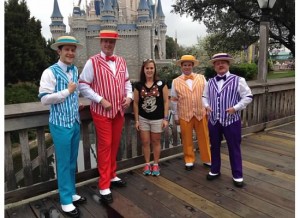 Luckily, they were accustomed to their fame and were extremely cordial to me as my very embarassed husband got the camera ready to take a picture (Likely an attempt to save these poor men from this seemingly crazed fan).  They were so kind and even took time to talk for a while before heading out to their next show.

So, I now knew that they did indeed exist, but I still had not seem them perform.  Again, Times Guides are all over the park for a reason, people–don’t be a dummy like me!  But, we have always been to Disney with our son, and he is more concerned with rides than shows, so we never spent a significant time on Main Street and certainly not near the front of the park where they typically frequent.  But, since we did not have our son this trip, we spent a significant amount of time on Main Street exploring all the shops.  [SIDE NOTE:  One of our favorite discoveries we stumbled on while doing this was the glass blowing demonstration that they do in Crystal Arts.  We took our son to this on a later trip, and he loved it too.]  We had planned to try and catch their show while we were there, but we never really checked the Times Guide and set a time for doing this.

We were checking out the “magic” phone in the hat shop [SIDE NOTE PART DEUX:  Go in the monogram area of the hat shop and pick up the old-fashioned phone to “eavesdrop” on a conversation filled with juicy gossip], and I noticed a crowd gathering across the street.  Then, I saw the pinstripes, and took off in full sprint–all the training for the Disney Princess Half Marathon had prepared me for THIS MOMENT.  I am sure they looked up in horror as they saw this crazed fan coming at them yet again.  Did I mention that I did not tell my husband that I was leaving, so he was left behind not knowing where I was?  He did say, however, that as soon as he exited and saw the Dans, he knew exactly where I was.  Truth be told, he was probably glad he didn’t see me make a fool of myself yet again as I trampled men, women and small children to get to them (just kidding on the tackling part by the way–maybe).

Like most things Disney, they were definitely worth the wait and did not disappoint.  You would assume since they are technically a barber shop quartet that this is a musical show, and, while they do sing, there is so much more to their show than this.  Like other Disney World shows like Mulch, Sweat ‘n Shears and the JAMMitors, the musical acts are blended with impeccable comedic timing and even audience participation.  The way that they would sing part of a song, drop a joke in and flawlessly returned to the song brought back memories of watching Hee Haw with my grandparents–minus the corn field they used for the jokes, of course.  They used unconventional instruments to deliver an amazing show. 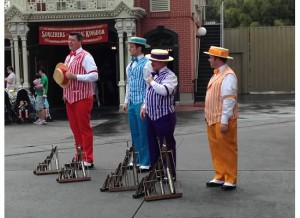 Even had it just been a musical number, it would have been an amazing one.  I absolutely love to hear people sing in harmony with each other–each member singing a different note that blends beautifully with the others.  There is just something beautiful about the blend that it creates, and even more so to me in Disney–a place where rides like “It’s a Small World” (You’re welcome for the song being stuck in your head all day now!) remind you that harmony is the theme and goal of these parks.

If you haven’t already, make it a point to catch their show on your next trip to Disney. Don’t be like me–pick up a Times Guide and be sure not to miss this act. But, don’t mention Tangled Diva sent you as they may or may not have a restraining order against me.