How to Throw a Great Toy Story Themed Birthday Party or Family Movie Night on a Budget! 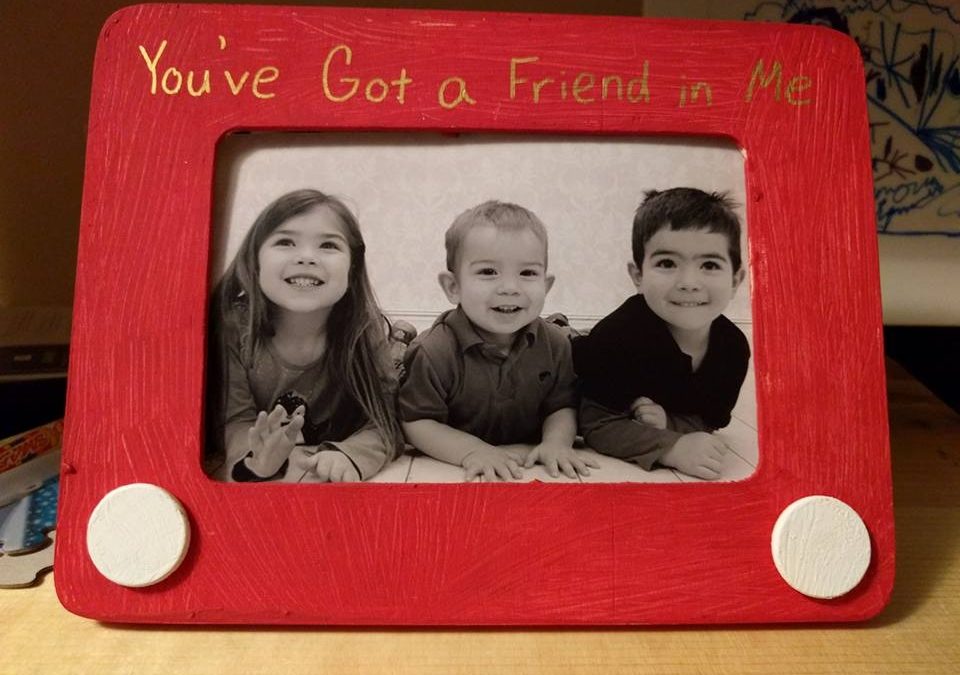 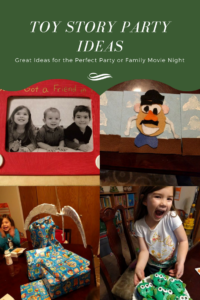 My son absolutely adores Toy Story. He is obsessed with pointing and shouting the word “Buzz!” whenever he seems a picture of him. So it only made sense that for his second birthday, I decided to go with a Toy Story theme.

Now the great news is, there are TONS of ideas for throwing a Toy Story party. In addition to Princess Diva’s ideas for throwing a Buzz Lightyear Party found here, the internet (particularly Pinterest) is full of them. And while I did want to focus on party ideas, I also wanted to plan activities around a family movie night, simply because in our house, we watch a lot of Toy Story movies and because I try to do a family movie night at least once a month (along with a couple games or activities to keep us moving and thinking), and I’m all for recycling ideas and projects. 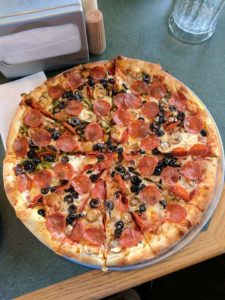 For the food, I kept it pretty basic… for drinks, we had sweet tea ( or should I say, To “Infini-TEA and Beyond”) and a bottle of apple juice with the sign next to it, “Somebody’s poisoned the water hole!” (Okay, so poisoned water probably would be more discreet and not look like apple juice, but my kids didn’t seem to mind.) We also had “Pizza Planet Pizza” (which can really be from anywhere). Disney Diva Tip: If you want to take it a step further and add a little more Toy Story magic to your party, I found this great Pizza Planet inspired t-shirt online that would be perfect if you or another member in your party wanted to dress up as a Pizza Planet Delivery Person. 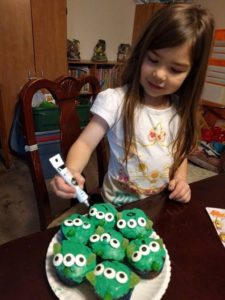 For dessert, I wanted to do alien inspired cupcakes. Disney Diva Tip: I used store bought green frosting, but it came out darker than I would’ve liked… if I had to do it over again, I would definitely recommend using a white frosting and just adding food coloring until you get it the exact shade of green you want. Once the cupcakes were made and decorated (my daughter was very willing to volunteer for that job), I wanted to make them stand out a little more, so I drafted my extremely creative and handy husband into creating the classic claw out of cardboard, toothpicks, an old ipod cord, and foil. 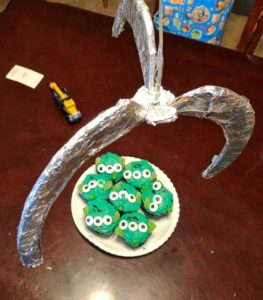 I also sprinkled army men around the table and in various places around our dining room just to add a little more Toy Story flare to our decor. After all, we all remember how Woody and sent Sarge and the rest of the army men out to do some reconnaissance at Andy’s birthday party and check out the new presents, so I figured Sarge and the rest of his team would be scouting out my son’s party too. 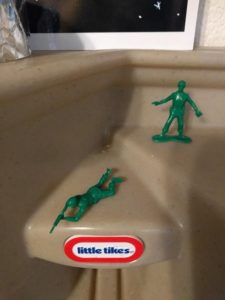 For the games, I knew I had to do something with Mr. Potato Head. There were just way too many possibilities. At first I was debating about doing something like, “Pin the Body Part on Mr. Potato Head”, where everyone each got a different body part to place on Mr. Potato Head. And in reality, no matter how he looked, it would be fine, because as Mr. Potato Head said, “Hey look! I’m Picasso!” But in the end, I decided to go with something a little more permanent, and chose to make some Busy Book or Quiet book pages inspired Mr. Potato Heads out of felt. 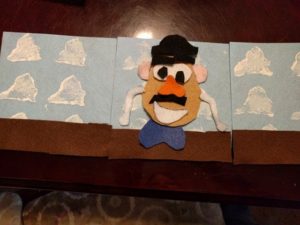 For the felt pieces, I found a great template off of The Quiet Book Blog (though I did add eyebrows, modified the hat, and changed a couple of the suggested colors just to match the movie better). From there, I cut out and traced the template pieces onto different color pieces of felt (I used light brown, blue, white, orange, pink and black) I then cut them out and put them onto a background of stiff light blue felt that my kids and I had stamped white clouds onto to resemble Andy’s room and glued onto dark brown felt to make a floor.  I figured this could act sort of like a playmat for the kids to arrange their pieces (and hopefully not lose them). Plus because I let the kids stamp and make their backgrounds with white paint and sponges, it added an extra crafting and hands-on activity which was fun for them too. Disney Diva Tip:  I also toyed with the idea of doing something with Mrs. Potato Head for the girls, but I decided to keep it simple and just do one. However, if you’re up to the challenge, you could certainly do that too. 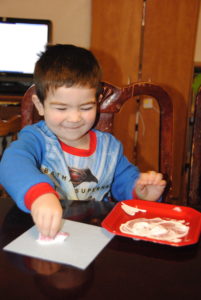 As far as the rest of the games go, I actually, went in an opposite direction from my usual parties, and avoided a Pin the Tail on the Donkey game altogether (though if you do decide to go this route and still don’t want to do with Mr. Potato Head, there’s always Pin the Tail on Bullseye or I found a Pin the Badge on Woody available for purchase.) 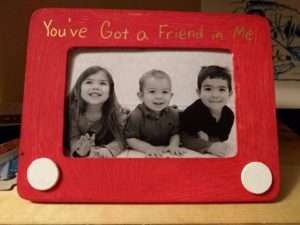 Instead we made Etch-a-Sketch picture frames out of wooden frames, wooden circle discs, red and white acrylic paints, and a gold metallic sharpie. I thought these would make for perfect gifts, as well as a fun momento to remember the day. I also edited and printed the images to be black and white so it resembled the background of an Etch-a-Sketch a little more. 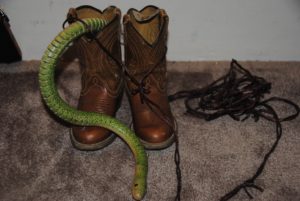 And how adorable are these cowboy boots? These were actually my husband’s back when he was a baby, and his mother gave them to us. I decided to stick in one of our toy wooden snakes for the “There’s a snake in my boot!” effect, and then found this great leather string called “braided wire” at my local Hobby Lobby which I thought would be a great lasso for the kids to practice throwing around the boot to try and catch the snake. This was a lot of fun, and the kids really got into it. 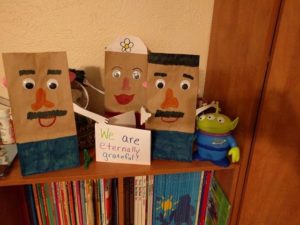 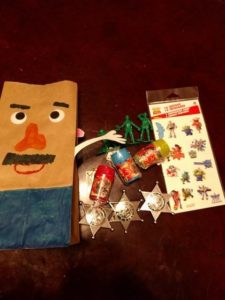 For the contents of the party bags, I put in Woody’s sheriff badges, Hamm’s chocolate coins, a couple of green army men, Toy Story tattoos, and a miniature barrel of monkey keychains, along with the Mr. Potato Head quiet book contents and Etch-a-Sketch frames. 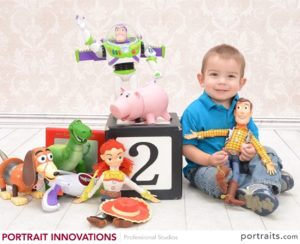 And because we try to always take pictures of my kids on their birthdays, I knew we had to use our collection of Toy Story toys as props for my son’s photoshoot. These pictures turned out great! I couldn’t be happier, and it was such a great way to capture my son and the love he has for his toys. 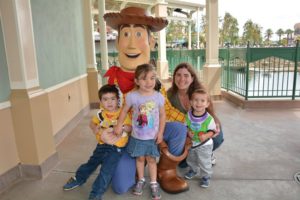 If you have an upcoming Disney vacation or live nearby Disneyland or Disney World, you can take this a step further and actually get shots taken at the parks. Whether it’s meeting with Woody, Buzz or Jessie, or it’s posing by Toy Story Mania or Buzz Lightyear’s Astro Blasters queues, there are all kinds of opportunities to be had! It’s also a great way to decorate and personalize your child’s invitations or thank you cards. Disney Diva Tip: If possible, I highly recommend your children dress as their favorite Toy Story character… the Buzz Lightyear line was only open for a few minutes due to the Pixar Parade, and unfortunately, we were on a ride and missed the five minute window slot by a couple of minutes. Fortunately however, because my son is adorable and was dressed as his favorite space ranger, the cast members took pity on us and told us we could wait by the exit and get a couple of quick pictures before Buzz had to leave to get ready for the parade. While cast members try to be as accommodating as possible, I’m pretty sure the fact that my son was dressed as Buzz was what sealed the deal on meeting him. 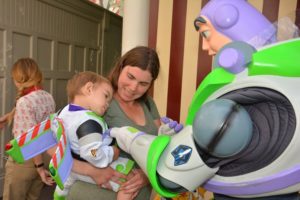 What other Toy Story party ideas do you have for birthdays, family movie nights, or other special occasions? Let us know in the comments below! Happy planning!