Everyone has them. Those moments in history that are so unforgettable, you will always remember where you were or what you were doing when the fateful event occurred. Many are unexpected, tragic events – the fall of the Twin Towers, the Kennedy assassination – and others are anticipated – Neil Armstrong walks on the moon, the fall of the Berlin Wall. When two events coincide, it calls for a particularly special celebration. That’s why when a milestone birthday for me fell on the same day we welcomed a new millennium (yeah, I’m a New Year’s baby), we knew we had to spend it at Disney. And that’s how my family came to spend New Year’s Eve 1999 at Walt Disney World Resort. 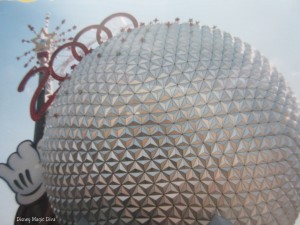 It was the only time my family has driven the 23 ½ hours to Orlando. Every other trip we’ve taken, we flew. But at the time, we wanted to save money, and to be honest, we were a little concerned about the travel issues we might encounter in light of Y2K. If you’re old enough to remember much about that year, you’ll remember no one was completely certain how the cyber world would handle the rollover from 1999 to 2000. People were concerned anything controlled by computer – from air traffic to banking to the entire power grid – would stop, or at least have problems, working. So we took out the captain’s chair in the middle row of the minivan, set up a small TV and VCR in the car (no drop down DVD players in cars back then!) and took off. 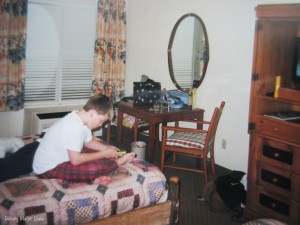 Notice the yellow flashlight next to the television on the armoire!

Our destination was Dixie Landings, known today as Port Orleans Riverside. Although the name has changed, the beauty of the resort hasn’t. We stayed in the Alligator Bayou section, and loved our room. We marveled at how well prepared Disney was for any Y2K issues that might arise. On December 30th, in preparation for New Year’s Eve, Mousekeeping left a flashlight in every room in the event of a power outage (see the photo to the left.) And on every street corner there were power generators and flood lights. Unlike the Happy Haunts, though, Y2K problems didn’t materialize!

We visited all the parks during our stay, Magic Kingdom, MGM Studios (as it was called then) and the new Animal Kingdom (it had only been open about 18 months at that point.) But we chose to spend New Year’s Eve in Epcot, so we could celebrate the new millennium in each country as it arrived throughout the day.

We knew it would be crowded. We had been warned all week by cast members to get to the park early, and not to leave once we got there. Everyone expected parks to close due to reaching capacity. Talk about an understatement! We are always early risers when visiting a park, and we took all the cast members’ advice to heart. We were at the bus stop bright and early, ready to spend the entire day at Epcot. Still, it took 90 minutes just to get to the front gate! Traffic was unbelievable, at a standstill at times, even for the busses! We were so very thankful we weren’t trying to drive and park ourselves!

TIP: Many of us at Tips from the Disney Divas and Devos have recommended getting to the parks at rope-drop, especially on busy park days. Arriving at opening can save you hours in line! Read Disney Diva’s advice here and Soarin’ Diva’s here. 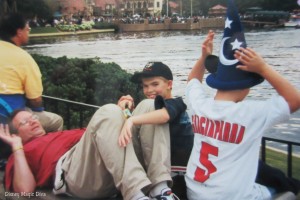 After enjoying several attractions and grabbing some lunch, I decided it was time to stake out a place to watch the fireworks. My family was less than thrilled. It was only about 2:00 pm, but it was obvious people were starting to save benches and other prime viewing locations. Since it was going to be a once-in-a-lifetime event, I wanted to be sure we had a good spot for fireworks. So we found a bench by the lagoon near the China pavilion, and took turns waiting. It was a long afternoon and evening, but certainly memorable! 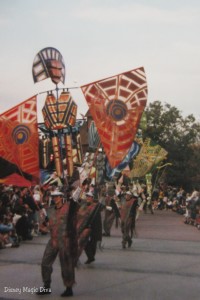 One highlight of the afternoon was the Tapestry of Nations Parade. It was undoubtedly one of the most spectacular Disney parades ever! The music was so dynamic, and the twelve foot tall puppets were completely breath-taking! We have the music from the Millennium Celebration on CD, and still smile and relive those memories whenever we listen to it. 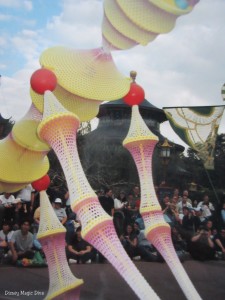 At some point in the day, the cast members started handing out black plastic top hats with the millennium logo on it, and horns to blow at midnight. We watched them tow the fireworks barge out into the lagoon. We waited. And tried to nap. And waited. As the day wore on, we found we couldn’t really take turns leaving to enjoy attractions, because other guests would try to encroach onto our bench. So we stuck together, and just waited it out.

When midnight finally arrived, it was all worthwhile! The image of my kids, with their arms around one another, ringing in the new millennium is one of my fondest memories of Disney. Disney’s tagline for the year was “Celebrate the Future Hand in Hand.” The special CD even had a song by the same title. My favorite lyrics epitomize our day at Epcot: “With a voice from every country, And a face from every land, We’ll celebrate the future hand in hand.” Every New Year’s Eve has an element of hope and renewal, and that year it was especially evident. Being at Epcot, a place where all cultures and traditions are celebrated, and seeing the hope and excitement in my children’s eyes, brought tears to mine. We reveled in the celebration! 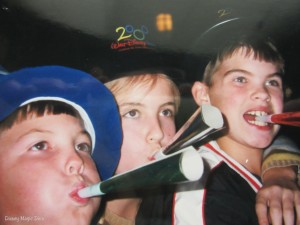 The fireworks, as expected, were absolutely phenomenal. By far the best we had ever experienced, and completely beyond our wildest dreams! Suddenly all the hours of waiting and complaining were gone. It was time to party!

The trip back to the resort was an adventure unto itself. It was practically impossible to move. I’ve been in big crowds, including New Year’s Eve at Times Square and Christmas Day at Magic Kingdom. But this was on an entirely different level. It was impossible to even take a step. People were crowded shoulder to shoulder, and you literally only had the space your feet occupied. We took our time, and did our best to keep hands on each other. Eventually we made it to Mexico. We decided to stop inside, and ride El Rio del Tiempo (now known as Grand Fiesta Tour Starring The Three Caballeros). It was after 1:00 am when we left the ride, and still the crowds were not moving. So we slowly, slowly, slowly made our way to the front gate. It took hours just to get to the bus stop.

TIP: New Year’s Eve, like other major holidays, is an incredibly busy time at Disney Parks. Bring your patience! Disney will do what it can and is very organized about moving large crowds, but patience is still imperative. This is your vacation. You’re supposed to have fun. If you don’t like crowds, or aren’t willing to wait, it may not be the best time to visit.

There were plenty of busses and cast members trying their best to keep the crowds moving, but the sheer numbers of people in a finite space made it impossible to move. Our only choice was to try to keep calm and enjoy the journey! We arrived back in our resort room at 4:20 am, exhausted, but happy.

That trip has always been one of my favorites. It was crazy and crowded and exhilarating and unforgettable. For our family, it was the perfect way to spend that extraordinary day.