Throwback Thursday: The Dark Side of the runDisney Kessel Run 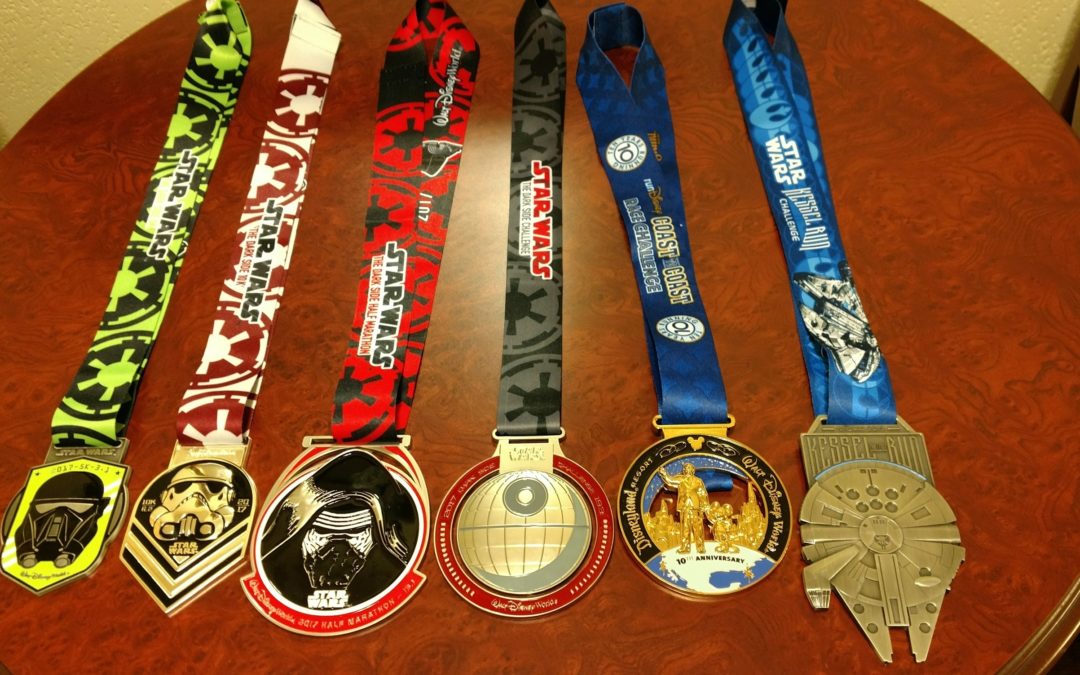 by Disney Magic Diva and Matt 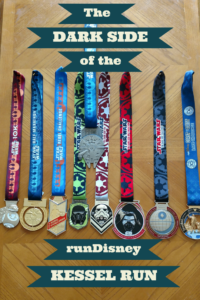 You may remember earlier this year reading about our family’s trip to Disneyland for the Star Wars – Light Side Half Marathon Weekend. Specifically, we went to chEAR on my son who was running the half marathon to complete the first part of the Kessel Run Challenge. At the time, we promised to report back once he had finished the Dark Side Half Marathon and earned his Kessel Run medal. I’m proud to say, he DID IT! Here’s his review:

Darth Vader and Obi-Wan Kenobi. Yoda and Emperor Palpatine. Han Solo and Boba Fett. Star Wars is all about light and dark, so to complete the runDisney Star Wars Kessel Run Challenge you must traverse the Dark Side. Specifically the Star Wars Half Marathon Weekend – The Dark Side. You can refresh yourself on the first half of the journey by reading The Light Side of the runDisney Kessel Run article. 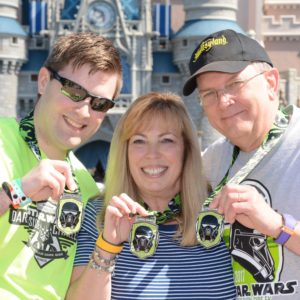 This weekend started off differently than the Light Side Half Marathon for me. First, I got to wake up Friday and do a 5k with my parents! While they preferred to stay back in their corral and send me ahead, I still felt great finally getting an “I Did It” picture with both of them! Of course, the Death Trooper (also known as AWR, Advanced Weapons Research) medal didn’t hurt! I am in this for the medals after all.

First off, the 10k and half marathon started in the Magic Kingdom parking lots. This was a change from last year when we started at Epcot. There were also fewer corrals than last year for the half marathon. To offset having more people in each corral, and to help stagger the runners, they started each corral in waves. The first few corrals were split into two waves, (the split happens when your corral begins walking to the Start Line) and the later corrals, which tend to have even more runners, were split into multiple waves. This resulted in perhaps a more evenly distributed number of runners throughout the course, but also seemed to take longer to get everyone started. Even with fewer corrals, the last runners were waiting to start for more than an hour.

The sea of people trying to make it to their corral, and weaving through the port-a-potty lines. (See the row of port-a-potties in the distance?)

I have good and bad thoughts on this. Starting at Magic Kingdom parking lot was oddly fun! It allowed us to get the ‘highway running’ done in the first two-thirds of the course and in relative darkness. Both things I appreciated. I did not appreciate trying to get to my corral by wading through the mosh pit-like lines for the port-a-potties that were extending 200 feet to the corral barriers. A more practical and user-friendly use of this space is something runDisney could definitely work on for next year’s race. 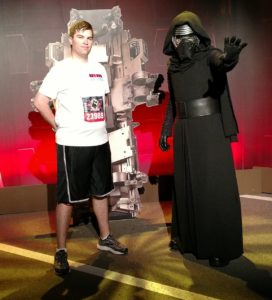 Overall, I found the split corrals to be a benefit. In my 10k I purposely hung towards the back of my corral to see what it would be like to start 2 – 3 minutes after the front. I had plenty of open course to start the race without having to push my way to the front of the corral, or be in the corrals right when they opened. This meant more time for photo ops near the stage before the race and waking up a little later. However, I can see the downside for those in later corrals (the last two especially) where they had to endure extra starts before they got to move.

What is there to love about Star Wars-The Dark Side? Plenty! The course itself may top the list. I love Walt Disney World race courses. The coolest course experience for me was in mile 3 of the half marathon: runDisney arranged an Ewok ambush to catch all of us stormtroopers-in-training. We were on a road in the dark with forest about 5 – 10 feet on either side. As we approached you could hear Star Wars music (as is common every mile or so on the course). Then from the forests, lasers burst out and blaster fire breaks up the music. There was incoming fire from both sides of the road, and with the bit of fog around us I felt transported to the Battle of Endor. A truly magical touch to the road. 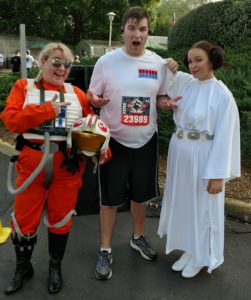 I also loved that the lines for photo ops stayed remarkably short during the 10k and half marathon! Talking with runners on the course and afterward no one waited more than 15 minutes to get a photo. Most were talking about waits of less than 10 minutes. And these are popular characters: R2-D2, an Ewok, Darth Maul, Chewbacca and more. They also of course had the 501st, Rebel Legion, and Mandalorian Mercs out for the race. As I was in my Director Krennic shirt I had to get a photo with the Emperor pleading to be given back the Death Star. 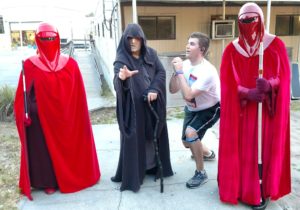 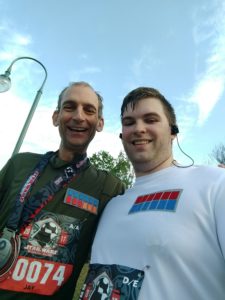 Just like in Disneyland I loved the fans running this race. One of my favorite memories was right before we got to Boardwalk a runner who had already completed his race was standing by the sidewalk yelling encouragement. This man was dressed as Grand Moff Tarkin, and again I sensed a great opportunity. Spoiler for Rogue One: Tarkin beats Krennic. Always.

There honestly wasn’t a whole lot not to like about this weekend. As to be expected, lines were bad Thursday morning at the Expo, and they need to adjust where things are at the Start pavilion but I had a great time overall. One complaint I did hear a lot was this particular course route put the parks too far back (Animal Kingdom was mile 5, Hollywood Studios was mile 10, and EPOCT was mile 13) but I took this as glass half full – more motivation for later in the race. It came down to your personal preference I think.

As I said before, I was in this for the medal. I had finished a 5k Friday, a 10k Saturday, and nothing would keep me from that Millennium Flacon Kessel Run Challenge Medal. And can I say, walking through the Challenge tent and pick up every medal? That was sweet. 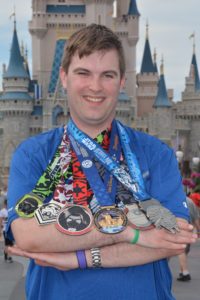 So here’s my tip for those considering picking up the light saber and running a Kessel Run Challenge – do it! You get more bling running the Kessel Run Challenge than any other runDisney race. They seem to be awarding the Kessel Run alongside the Coast-to-Coast (in 2016 and 2017 now) at Walt Disney World, so that means you can pick up 4 medals on half marathon day (Half, Challenge, Coast-to-Coast and Kessel Run). You can take home a total of 6 medals in a weekend (5k, 10k, Half, Challenge, Coast, and Kessel). You can take home 10 medals for 2 race weekends (2 5k, 2 10k, 2 Halfs, 2 Challenges, Coast, and Kessel). If you are like me, and run for the bling, this is the race you’re looking for.

I hope to see you out there in 2018 for the Dark Side. Until then, May the Force Be With You.

If you’re ready to take on the Kessel Run Challenge, be sure to contact Patricia at All for Dreams Travel for a FREE quote on your Disneyland Resort and Walt Disney World Resort vacations. She will take care of all the details, and all you need to do is focus on making that Kessel Run in less than 12 parsecs.