Throwback Thursday: For the First Time in Forever: Our Family Discovers the Magic of Disneyland 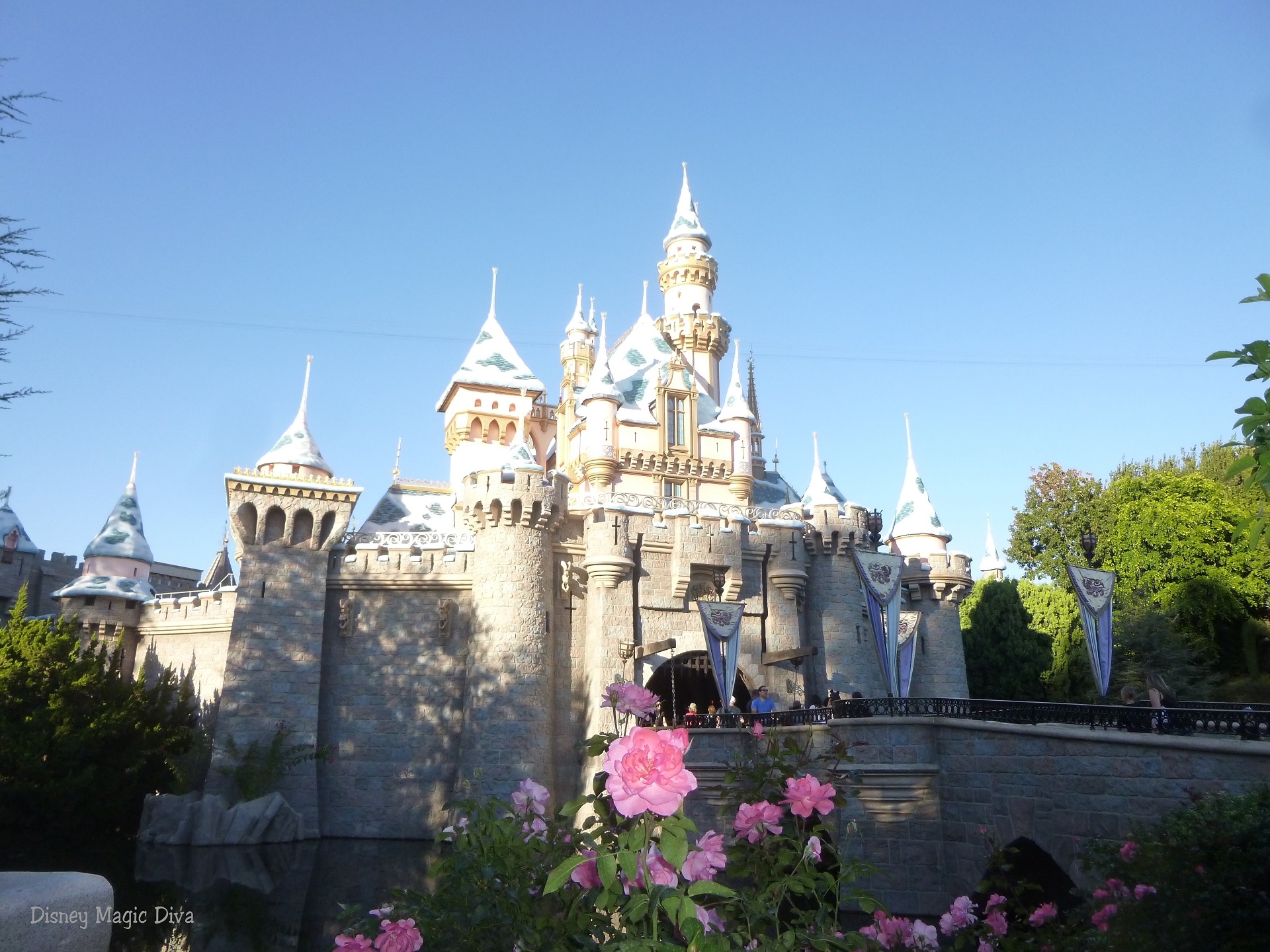 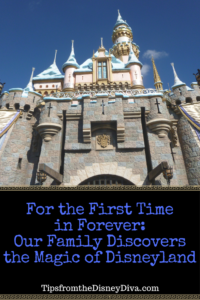 Living in the Midwest, I’m one of those poor unfortunate souls who is pretty much equi-distant from Disneyland and Walt Disney World.  Since my husband grew up a Disney World fan, that’s where we had always taken our family vacations.  It seemed to make sense – it’s so much bigger than Disneyland, it’s cheaper to stay on-property, and frankly, for whatever reason, from our hometown flights are cheaper to Florida than to California.  So when our son won a 4-night/5-day all expenses paid trip for four to his choice of either Walt Disney World or Disneyland, he saw it as his chance to finally visit the original Disney Park. Thankfully, he chose to take his brother and parents too! 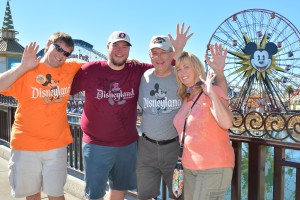 You probably know that while both Disneyland Resort and Walt Disney World Resort share some of the same attractions and similar characteristics, each has its own unique features.  As a Disney World family, we were excited to be able to experience those differences first hand and I’m happy to share our discoveries with you.

Disneyland was Walt’s park.  It’s the only Disney Park he saw completed.  As Disney fans, it was humbling to walk down Main Street, U.S.A and know that Walt had walked here too. 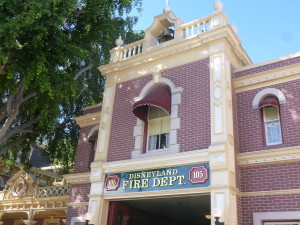 His apartment is there, and you can see the light still on for him in the window above the Fire Station. It’s the original. It’s historic, intimate and charming.  A Mecca for Disney buffs. There’s nothing like Disneyland. 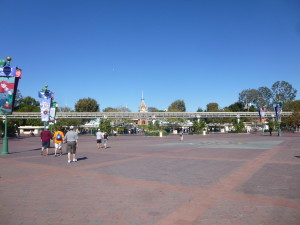 Disneyland and Disney’s California Adventure are literally steps away from each other. This is the view of Disneyland from the gates of DCA.

If you’ve done any research on Disney Parks, you know that Disneyland is considerably smaller than Disney World. While Walt Disney World boasts four parks (and two water parks) over approximately 47 square miles, Disneyland has two parks and encompasses only about 1 square mile. As frequent visitors to Disney World, we’ve become accustomed to waiting for busses, ferries, water-taxis, monorails, or whatever to reach the parks.  At Disneyland, all we needed were our feet!  Within ten minutes of leaving our hotel room, we were inside a park.  Our first morning, waiting to enter the park, it was somewhat hard to comprehend that we could stand outside the gate to one park, look across the plaza, and see the other.

TIP: If you are an advocate of park-hopping at Disney World, you will LOVE it at Disneyland! I literally went back and forth between parks within five minutes.  Catching closely timed shows at both Disneyland and DCA is possible with such easy access!

Even within the parks, the size was mind-boggling.  Without making the park seem smaller, everything at Disneyland is magically close-by.  Instead of exiting an attraction and WALKING to the next, when you exit one attraction, you are practically AT the next, ready for the magic to continue!

Disneyland  Resort has some attractions you just can’t find at Walt Disney World.  While WDW has plenty of Mountains, not one of them is the Matterhorn! It was so exciting to finally get to ride those bobsleds! Other favorites were once at Disney World, but today you can only enjoy them at Disneyland:  Mr. Toad’s Wild Ride, Snow White’s Scary Adventures, and Toontown were fun to “re-visit.”  The Finding Nemo Submarine Ride was reminiscent of 20,000 Leagues Under the Sea: Submarine Voyage, but the Indiana Jones Adventure is a thrill ride and completely different than the Indiana Jones Stunt Spectacular in Hollywood Studios. We visited in the fall, when Haunted Mansion is overlaid with The Nightmare Before Christmas.  It was definitely a treat (and not a trick!) to see such a clever and entertaining rendition of a classic attraction.  Pirates of the Caribbean and It’s a Small World are standard favorites at Disney World, but we marveled (and loved!) how their counterparts differed at Disneyland.  Overall, we thought the theming of the Disneyland attractions surpassed that of Disney World, and it seemed like most rides lasted just a little longer.

While EPCOT, Hollywood Studios, and Animal Kingdom all are magical parks at Walt Disney World Resort, Disney’s California Adventure provides plenty of opportunities for some unique magic at Disneyland Resort. Probably the most popular attraction, Radiator Springs Racers, was a tough Fastpass to get, but well worth the effort! Make sure to try Radiator Springs Racers at night, too. Catching a glimpse of a full moon over the desert landscape as you go racing by was just breath-taking!

TIP: Take advantage of Extra Magic Hours to ride Radiator Springs Racers.  It’s always a popular attraction, so riding before the park opens to the public will save you time. 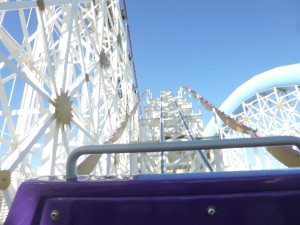 California Screamin’. The front car is worth the wait!

I’ve never been a fan of ferris wheels, but I had to try the iconic Mickey’s Fun Wheel.  Even though that was a “one and done” for me, my family loved it! We also loved the musical, Aladdin, the nighttime water show,World of Color, and all the attractions along the midway of Paradise Pier.  My favorite attraction, though, hands down, was California Screamin’.  After my first ride (and believe me, there were many!) I walked off saying it was my choice for Best Disney Coaster!  It has the thrills and quick start of Rockin’ Roller Coaster (my previous favorite), but it lasts almost twice as long! 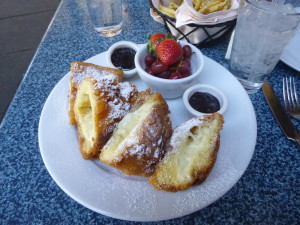 The Monte Cristo sandwich at Café Orleans. Big enough to share, but so delicious you may not want to!

What’s a trip to a Disney resort without partaking in some scrumptious food?  We had a long list of restaurants to try, and loved them all!  Steakhouse 55, Blue Bayou, Carthay Circle, Plaza Inn for fried chicken and Café Orleans for a Monte Cristo sandwich were all phenomenal. We also paid more than one visit to the corn dog cart on Main Street. YUM! And I’m happy to report that the Mickey Bars and Dole Whips were just as wonderful as they are in Florida!

Many people prefer either Walt Disney World or Disneyland.  They may visit both, and probably enjoy both, but one park is “home.” Since finally getting to visit Disneyland after years of calling Disney World my home, I’m ready to have dual citizenship.  Both are magical.