Throwback Thursday: When it Rains on Your Halloween Party 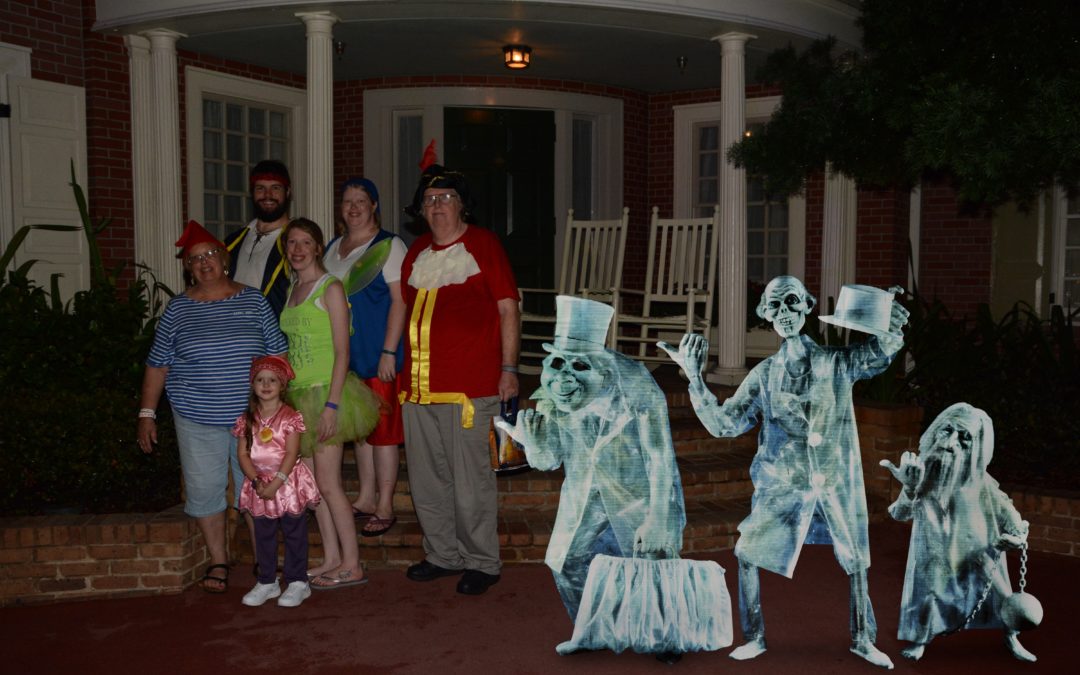 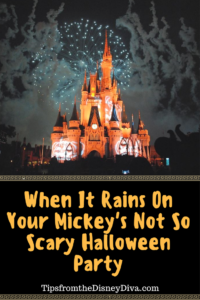 A few years ago we attended our 3rd Mickey’s Not So Scary Halloween party. Unfortunately, due to unforeseen life complications, we had to travel earlier in the year than we generally prefer. Due to our love for Halloween and Epcot’s Food & Wine Festival, our travel dates fell in September, one of Florida’s rainiest months. We’ve dealt with rain at Walt Disney World before, so we weren’t too worried about it. I watched the forecast for the weeks leading up to our trip and as our travel date approached it was looking pretty decent. On the day we actually landed in Orlando, the day of MNSSHP, scattered showers were predicted early in the day, but it was supposed to clear up for the evening. It was actually raining a little at the airport when we arrived, but as we traveled to the resort the skies cleared and the sun emerged. 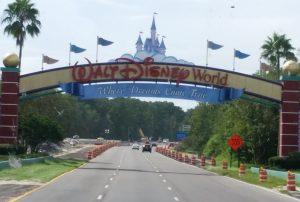 By the time we arrived at our resort, the sun was shining, the skies were blue, and the heat was rising. We dressed, took a quick glance at the radar (just some scattered stuff- nothing major), and headed to the Magic Kingdom. Our first stop was a visit to The Mouse himself, and then we hit a couple of rides before dinner. 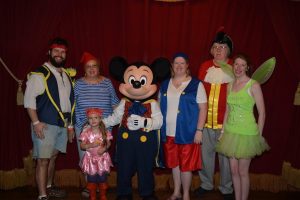 Due to scheduling our trip with less notice than we’re used to, the night of our Halloween party was also the only night I was able to snag a dinner reservation at Be Our Guest, my favorite restaurant in all of WDW. Luckily, our reservation was early enough that we felt we’d have enough time to eat without really missing any of the  party. While we were riding Pirates of the Caribbean, our last ride before dinner, it apparently rained pretty heavily for a few minutes. Once we emerged from the ride and saw the puddles and the gray sky, we felt pretty fortunate at our timing since we were on our way to dinner and figured the storm would pass by then (Spoiler Alert: we were VERY wrong!). 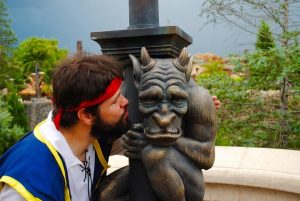 Dinner was fantastic as we knew it would be- but we couldn’t help but note the growing number of people in the lobby wearing obviously wet ponchos. As dinner progressed, the crowd in the lobby grew tremendously- people were finishing their dinner and then hanging around. Towards the end of dinner, my sister popped out to check on the weather and reported that it appeared the rain had ended but the abundant puddles let us know we had missed some heavy precipitation. It started raining just about the time we left the restaurant, however, and as we walked towards Fantasyland, we saw quite a bit of lightning in the distance. The rain began to pick up as we walked, so we ducked in Village Gifts to purchase some ponchos. It’s a good thing we did because the rain became steady once again and showed no sign of letting up. The lightning also became more frequent, so we sought shelter in a couple of inside rides. When we reached Storybook Circus, we learned that nearby trick-or-treat stations had been moved inside, so we did some shopping and got some candy. We noticed it was almost time for the first scheduled Boo To You Parade but the frequent lightning and heavy rain was a good indication that the parade would not be happening as scheduled. We decided to hit all the trick-or-treat stations we passed as we slowly made our way towards Main Street because my daughter absolutely loved collecting the candy.

By the time we reached Main Street, the rain was slowing and the lightning had passed. We found a place in The Hub to watch Hallowishes, hoping the weather would cooperate long enough for it to go on as scheduled.  Luckily, the weather finally started to clear and we were able to take off our ponchos before the fireworks started. Being a photography enthusiast, I was especially happy to be able to get my camera out without fear of the weather ruining it just in time to capture one of my favorite party activities. 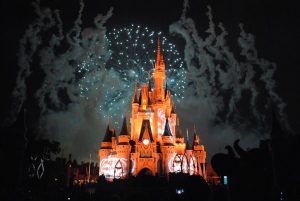 After Hallowishes, we realized we had a decent viewing spot for the Hocus Pocus Villain Spelltacular show, so a couple members of our party who didn’t want to see it went to snag a good viewing spot for the parade while the rest of us stayed in The Hub. After several announcements of weather delays and watching Cast Members sweep standing water off the stage, we finally got to see the show. It was awesome, although we later realized that our show had been greatly shortened (I suppose it was due to the late start and trying to get done before the parade started). I am a big fan of Hocus Pocus so I was glad to see that stage show was back for a second year. After the show, we joined the rest of our party in Liberty Square to watch the Boo to You Parade. Our ponchos from earlier made a nice dry place to sit while we waited for the parade to begin.

Once the parade was over, we decided to hit a few of the party specific photo spots before leaving for the night since the weather was finally cooperating. I was particularly excited about the new Headless Horseman photo that was being taken in front of the train station since we didn’t get to see him in person this year (he normally won’t be in the parade if the streets are wet). The park was pretty empty at this point, so we got all our photos with little to no wait, and hit a few additional trick or treat stops as well. 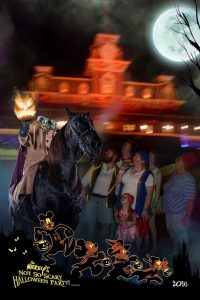 In the end, we got to do everything we love most about the Halloween parties- fireworks, parade, and special photos- but there was a lot we missed out on due to the rain. Unfortunately, none of the other parties during our trip fared much better- it seemed to rain for every single one of them. If you are planning on attending Mickey’s Not So Scary Halloween Party, I suggest you come up with a rain plan so you can make the most of your time in the case of inclement weather. For more tips on dealing with rain at Disney World, check out Devo CabDisney’s article here.

Ready to book your next vacation? Tips from the Disney Divas & Devos recommends our very own FREE Disney Diva Travel Agent Patricia from All for Dreams Travel!. She is an authorized Disney Vacation Planner, and because her commission is paid by Disney, her services are completely FREE!!